Brother and sister, a little Corgi history from our house 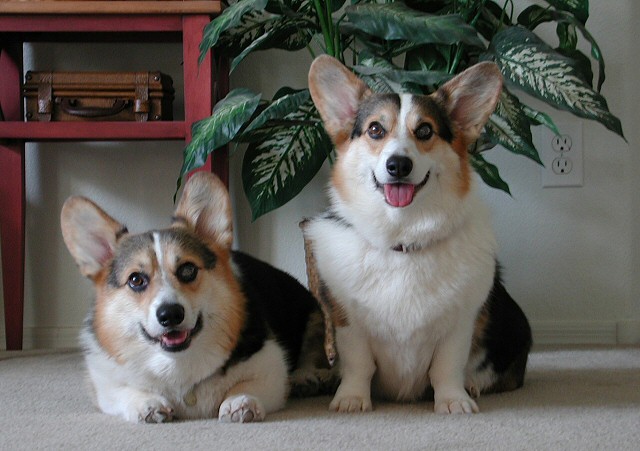 I went to a dog agility meet because I thought it would be a good place to see a variety of breeds and be able to interact with their owners. During the course of the day I saw a short legged, stocky dog going like gangbusters around the agility course and having the time of his life. On the A-frame he didn't even stop at the top but FLEW over the peak never touching it. A quick inquiry revealed that the spunky little dog was a Corgi. Hmm...not a big manly dog but amazingly cool. I needed to know more.

So I began reading up on Corgis and in time met long time Corgi breeder Jean York. Jean had a Corgi puppy, 12 weeks old, that she had decided not to show. After some conversation and e-mail trading and a visit to Jean's home in Southern AZ, Watson came home with us. He was quite a puppy and quite a dog. Three years later I found that Watson's litter mate, Tinsel, needed a new home and I was most fortunate to be able to bring her home too. Brother and sister reunited!

We had a fine time, the three of us. Life had some ups, downs, and adventures. Watson was my Corgi pal, while the demure, happy Tinsel became my "Heart dog". Never in my life have I had a dog so steal my heart. People who didn't even care for dogs found themselves drawn to Tinsel and happily petted her, something she greatly enjoyed.

Watson and Tinsel both left us last year, it made for a heartbreaking year in so many ways. My worst fear, that I'd lose them close together, came true. But the memories and happy Corgi smiles and "arroooos" were worth the sadness.

We'd thought we might wait several months, even a year before we got another Corgi, but the house was too empty, too lacking in Corginess. Our wonderful little mini-wiener dog, Holly, is always fun but I confess
to being hopelessly addicted to Corgis. I contacted Watson & Tinsel's breeder, Jean York, about getting on the list for another puppy. After Christmas 2009 good fortune allowed us to bring Gromit home with us from California.

When I was going through the assorted paperwork Jean York had given me with Gromit I found Gromit's pedigree. Normally I don't get excited about such things as pedigrees because I don't show dogs and have no plans to do so. But there in Gromit's pedigree was his great-grandfather, Am/Can Ch Sandyshire's The Phantom, ROMX.  AKA "Tommy." So? Nice dog, extremely successful, but what's the big deal? Lots of Corgis have fine champions in their pedigree. Well, Tommy was Watson & Tinsel's sire and therefore my beloved Corgi pals Watson & Tinsel are Gromit's great uncle and great aunt. That doesn't change the world or anything but I just thought it was nice that without trying we'd kept a family legacy going here in our little house.

Below: Gromit sits on the bed with a painting of Great Uncle Watson and Great Aunt Tinsel in the background. 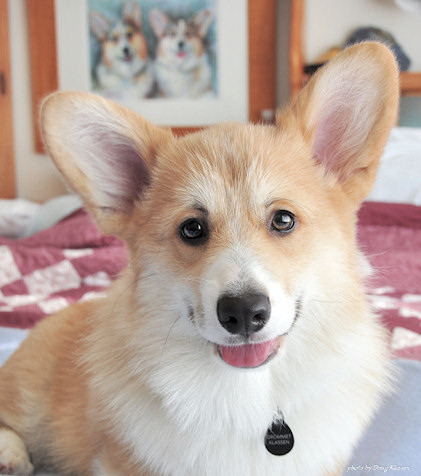 My daughter and I also had our first corgi encounter - and fell in love with the little twerps - at an agility meet! We had gone to watch my dad's border collie run, got there early and saw the "short dogs" run. The rest is history!

Comment by Gromit, Sparkle, and Doug on March 4, 2010 at 12:08am
Thanks everyone, for your comments. I'd say I was sorry about making some of you "get something in your eye" but Corgi people are big hearted people so it was probably inevitable. Mycorgi.com wouldn't be as special as it is if it wasn't for our amazing, short little friends, but it is also special because Corgi people are the best.

Thank you for sharing your story.... it really touched my heart.

Comment by Laura Jones on March 3, 2010 at 10:36pm
Very cool story. I also have a thing for keeping it in the corgi family. My two corgi's are half brother and sister and I have to say that when I am ready for a third one I will very likely go back to the same breeder which means in some way that one will also be related. Gromit is such a cutie and Winston and Tinsel are absolutely gorgeous!

Comment by Katie on March 3, 2010 at 10:28pm
I love your story of Watson, Tinsel and their great nephew Gromit. I am so happy you have more corginess in your life.

Comment by alice wright on March 3, 2010 at 10:14pm
Gromit even looks a little like his great aunt and uncle, same cheeky grin

Comment by Ashley and Copper on March 3, 2010 at 9:31pm
This produced a little tear! They are the most wonderful dogs! I'm glad you've found happiness again. I just found mine again, also!

Comment by Fagin, Dodger and Poppy McFuzz on March 3, 2010 at 6:19pm
What an absolutely beautiful and touching tribute to your sweet Corgis! One look at Gromit's sweet face and it's clear he will be adding much joy to your lives. I am so sorry to hear you lost both of your beloved dogs, especially so close together. I often look at my Fagin and wonder what I will ever do when the time comes to say "goodbye" to him, but I just wanted you to know that reading your charming story has, at the very least, ensured that Fagin will be getting an extra treat and additional frisbee time each day. Thank you for sharing!