It's two steps forward and one step backward here of late. Ruby is making great progress toward becoming a grown-up corgi; Ruby and Cassie have become a mini-pack consisting of two fast friends allied in the single goal of bossing the human around; and Ruby has kindly racked up another $350 in vet bills.

As reported the other day, Ruby finally figured out how to use the dog door and then became so enamored of it the trick was not to get her to use it but to get her to knock it off!

Well, it didn't take long before she made the connection between going outside through the doggy door and going outside to do her business. The puddles and mounds on the floor disappeared forthwith.

Actually, they were almost gone as it 'twas: I've been keeping an eagle eye on her every living, breathing minute, so it's been a rare event when she could sneak away long enough to defile another floor. However, with the door open, she hasn't needed to be watched constantly.

Yesterday, I had to schlep out to Sun City to visit a friend and his lady friend. Normally I would take Cassie with me. She's unobtrusive and doesn't get into mischief. But Pup? Maybe not so much. In the first place, he recently recarpeted his house, and you may be sure he would not be pleased if Ruby decided to turn a bedroom into her private outhouse. In the second place, she can't go outside there because Sun City is literally overrun with coyotes. They're renowned for their taste in small dogs.

Sun City is a long drive from the Funny Farm, and with New Girlfriend present at the dinner, an eat-and-run maneuver would be too, too rude: I was gonna have to sit around for an hour or so after dinner to chat. This could add up to an absence of quite a few hours. I really didn't want to leave Ruby locked in her crate that long.

So...I blockaded the entrance to the hallway that leads to the bedrooms. Closed all the bedroom/office/bathroom doors except the one to the master bedroom/human & dog den and the one to the spare bedroom where the dog door is punched through the outside wall. This meant there were only three floors where Ruby could defile: the dog & human bedroom (not likely!), the hallway, and the spare bedroom. And then it was off to the Far Side of the Galaxy!

Welp, more than five hours later I cruised back in the door, only to find...NOT A SPOT on the floors!!!!!

Apparently the little gal has learned to use the doggy door to potty outside. By golly. What a triumph!

It gets better. Amazingly, the competition over the dog food has come to a full stop! Ruby no longer has to be tied to the oven door handle at mealtimes.

Yesterday, craving some death-defying adventure, I decided to see what would happen if I put down the dog dishes without leashing the Little Pistol to the oven door, where she has been held captive while the two of them eat so as to keep her from chasing Cassie away.

I didn't leave the kitchen (where they eat in view of each other these days), but neither did I plant myself between the two of them to act as a living barrier.

Ruby did NOT race over, chase Cassie off, and try to gulp down her food. She ate her food. Cassie ate hers. When Cassie had finished vacuuming up the last molecules off her dish, Ruby went over and searched for a few stray molecules. Cassie ambled over to Ruby's now-unguarded dish and policed it for any extra food molecules. They then went on their way in peace.

Hallelujah. Now we can lose the decorator item (red leash) that has been permanently affixed to the oven.

So a few weeks ago Dr. B, the favorite old vet whose veterinary resides across town, decided Ruby's ear-scratching habit indicated a food allergy and asked me to take her off beef and all grains.

When you look into Ruby's ears, you can see black gunk reminiscent of cat ear mites.

Now adult dogs very rarely get ear mites. Puppies sometimes do, but even then, ear mites are uncommon in dogs. But. My life of late has been a chronicle of the uncommon.

It was Saturday morning and I could see a boatload of work to do all weekend and through the upcoming week. Instead of schlepping across the city, I called a (radically expensive ) veterinary much nearer to my home. These vets cater to the richerati in the upscale central-city neighborhoods, and believe me, their bills can take your breath away. But convenience trumped economy this time.

Get in to see a brand-new partner there. Like her a lot. I say, "Will you please take a swab of the black gunk in her ears, put it under a microscope, and tell me if you can see any cute little arthropods swimming around?" She accommodates.

Pretty quick she comes back into the examining room and says she didn't see any mites but she did see a whole lot of yeast.

Conclusion: Ruby has a yeast infection in both ears.

She cleaned Ruby's ears, handed over a bottle of lavage stuff to use every other day, said to use up the ointment Dr. B had given us, and presented a bill for $185. That would be on top of the $135 paid to Dr. B to tell us to quit feeding beef and smear some of this STUFF into the ears. Thank you very much. 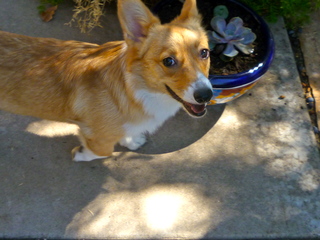 Here is a website that gives dosages for dogs.  Max goes 35 lbs and during his allergy time he gets 2 a day, 12 hours apart.  I use Walgreen's brand and have also use Target brand.  Same stuff with a lower price tag...and both were ok'd by the vet.

@ Linda & Judith: Benadryl, eh? Hm. I've given larger dogs Benadryl in the past...any clue how much is safe for an 18-pound dog?

Doc B, the reasonably priced and very excellent vet who practices on the other side of the galaxy, thinks it's allergy-related, and I think he's probably right. The late, great Walt the Greyhound had food allergy-related ear infections. We quickly figured out Walt's problem was corn. But Ruby gets exactly zero corn in her food.

Doc B asked me to take her off beef and all grains. I did that until my recurring medical problems required me to feed commercial food again. For a while I was able to get grain-free varieties of the FreshPet rolled product I favor (it's as close to what I make in my kitchen as commercial food gets). But then I'd bought up all those varieties, and the last time I drove to the suburban upscale Fry's (Kroger) market that carries the stuff (over an hour of drive time...), they hadn't restocked and so I had to buy a couple rolls of chicken with brown rice.

So there's an outside chance she may be allergic to rice. Or, of course, she could be allergic to chicken as well as rice, or instead of rice, since the last several rolls were grain-free turkey.

We'll soon know. Today we run out of the commercial food. I have a raft of chicken with sweet potato, home-made, in the freezer, enough to feed the dogs for a couple of weeks. If she improves in the next few days, then it's a safe guess that grain is the problem. If she doesn't improve, then we're looking at two candidates: chicken or an air-borne allergy. The floors are pretty clean, and because all the floors are hard it's easy to clean under the bed and furniture, so I doubt the problem is dust & mites. That would leave pollen, eh?

And in Arizona, pollen is a serious offender. One moves to Arizona to find out what one's allergies are.

I like the Benadryl idea. It's pretty well tolerated by dogs, it's cheap, and I have a bottle of it in tablets that can be cut in halves or quarters. But I think I'll wait until we can see what happens when she gets back on the home-made real food, which will remove not only grain but also the long, long list of chemicals that every commercial dog food adds. If she doesn't improve within a few days, then I'll try a little Benadryl on her until such time as I can afford to buy a turkey and cook that up for her.

@ Judith: Yes, this veterinary is probably the most expensive in town, at least this side of northeast Scottsdale, which truly is Richistan. The middle class has largely moved out of central Phoenix, leaving only the very poor and the very wealthy. We do have a couple of neighborhoods in town that support businesses catering to people for whom price is no object. That means to get to a good vet who doesn't clean out your bank account, those of us who prefer city living to the faceless, sprawling suburbs have to drive way across town. Sometimes that kind of time suck is just unmanageable, so I'll spend a few bucks more to visit an expensive centrally located ____ (fill in the blank: veterinarian, doctor, dentist, decent grocery store, hair stylist who knows what he's doing...) to avoid having to drive so far.

Wow!  Crazy prices.  Murray has seasonal allergies too.  I give him Wal-phenate from Walgreens...really works on him and is cheap.

Allergies can cause a yeast infection in the ears.  I know because I have the same problem with Max.  Benadryl has become our friend during the period from mid August to the first freeze when ragweed is the worst.  Benadryl or rather Walgreen's brand is much cheaper than many trips to the vet.