Every now and again, The Ondt Queen lays siege to the Funny Farm. She sends her Myrmidons into the breach, swarms the kitchen floor, and attacks her favorite target, the dishwasher. The only way to beat back these hordes is with ant bait. To protect the dogs, I cover the baits with old electric-fan cages. You can take a cheap fan apart, providing two conveniently basket-sized cages that are perfect for keeping critters out of little hazards.

This device has worked on a greyhound, a German shepherd, a Golden retriever, and a seven-year-old corgi. So far.

So a day or two ago, a front guard arrives in the garage and starts to lay out battle lines around the trash can. Naturally, I toss down a couple of ant baits by the garbage can and drop a fan cage over it.

This morning I walk out there and find the fan cover shoved to the far end of the garage. No ant baits under it. No ant baits in evidence anyplace.

Well, at first I figure Rattie has come visiting again. Rattie is a roof rat, of which we have a few here in the 'hood. She likes edibles, which is why we don't put wet garbage in the garage. She can squeeze through an opening the width of a quarter. Neither the garage door nor the side security door fit tightly -- they both leave plenty of room for her to stroll right in.

However, Rattie usually leaves various signs of her presence. I don't see any. And I'm all too familiar with Rattie's calling cards.

But...if Rattie didn't grab the ant bait, who did? Since the raccoons can't get through a hole that small, the only likely candidate is one of the resident dogs. Cassie's never been tempted by ant bait. So...who do we know who wishes to taste every object she encounters? 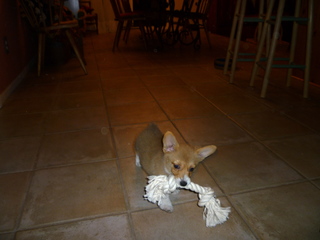 Could be... But how did she get the baits out from under the basket?

Put a couple of doggie treats under the thing, right in the middle. Called Ruby the Corgi Pup over. And...here's how she does it:

She pushes the basket across the floor until the treat is right up against the thing's rim. Then she bops it with her nose until it flips just high enough for her to snatch the treat out from underneath!

This is a 15-week-old pup! What's she going to be like when she reaches, say, six months?

So this means she's eaten two doses of an insecticide called Indoxacarb.

I call the vet's office when they open -- since the dog hasn't been in the garage this morning, she must have ingested these things yesterday afternoon. They say unless she shows signs of poisoning, the greatest is from her having swallowed all that plastic, which could perforate her intestine or cause a blockage. They suggest I call the Pet Poison Control Center and give me a phone number. Call it twice: it's a wrong number. Find an ASPCA poison hotline: they want $65 just to let you ask a question. That's altruistic of them...

So I go online and look up Indoxacarb. Turns out it's one of the chemicals you smear on the dog to control ticks and fleas. While ingesting it isn't great for the dog, the amount in one or two of those ant bait packets is probably not enough to cause much harm. A list of potential symptoms follows.

None of them apply. Ruby has been eating well, racing around like a rocket; no barfing, no diarrhea. No sign of plastic in her poop, either. Apparently she's unaffected, at least so far.

The Ondt Queen's legions just walk right through DE. The kind that works (eventually) has an insecticide in it and says to keep it away from pets...and I haven't seen the stuff on the market in quite a while.

I'll have to put a cinderblock on top of the metal cage next time I'm forced to do this. When the Armies of the Night get into the kitchen, it's quite a problem, because they one walks in there barefooted in the wee hours around 4:30 or 5 a.m., when the sun comes up here, and they bite like the dickens.

Wow, I'm surprised no dogs before Ruby have been able to get their way into the ant bait!  Every dog my family has ever owned has been able to get into anything that isn't actually tied down or attached to a solid surface.  And even then, if it can be chewed through then it's probably a goner.  It's good to know that it hasn't harmed Ruby, though!  Have you tried any non-toxic/dog safe ant deterrents before?  I've heard that diatomaceous earth works pretty well.