File this under the Best.Day.Ever! Sully and I received an Evite to attend a doggie de-stress session for students during finals week at Wheaton College. I take classes there so Sully knows the campus. The college had set up a penned in area (like a dog park) where town residents and professors could bring their dogs so the students could take a break from studying to pat, cuddle and play with the dogs for a couple of hours. There are no dog parks in this town or any other town around that I know of but all of the dogs in this setting were great. Very well behaved. I think there were about a dozen. As usual Sully was the least active, actually, the inactive dog in the group. There were several huge, but really nice dogs which she was afraid of at first but she relaxed when she realized they were safe. One of the big dog's owners also noticed how well she was adjusting to the bigger dogs coming up to her and he sweetened the pot by giving her praises and treats. The more active students played fetch with the more active dogs and the cuddlers all flocked to Sully who looked like she was in Heaven. The students kept raving about how great it was and asking when they could do it again. Two girls stayed with Sully the entire time and asked if they could dog sit. The dogs were all so happy. I think this should be attempted at other colleges. It was a win-win for sure! I don't have a smart phone so I didn't get pictures but it could not have gone better for all concerned.

Sidney is a therapy dog with Love on a Leash and we go to local colleges/universities during finals weeks. It is so much fun! 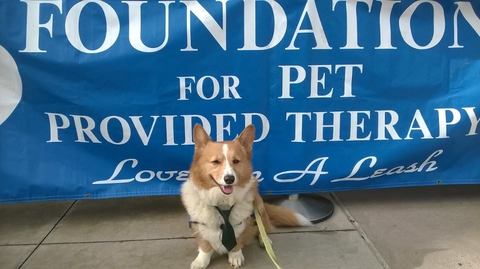 It doesn't appear this made the local news but positive feedback from many students helped the coordinating Dean consider another event on the fall. Love this college!

ps.  I sometimes am able to bring Jeli to work and she has the same effect on my co-workers.  She isn't a snuggler, but she brings lots of smiles and laughs.  We do a few tricks here and there for people and they love it!

That is so awesome.  What a great experience for both the dogs, dog owners and students.  I hope other places pick up on that.  Yea Sully!

Kudos to whoever thought that up! I hope it was picked up in the local press or News and that the word spreads! Go Sully!!! We all can use cuddles when stressed.

What a wonderful idea for the students!  Amazing how spending time with a dog or cat (almost any trained animal) can reduce the stress in a person's life.