Flying for the 1st time with a Corgi!

I'm hoping this post will help out those who are flying with their Corgis in-cabin since I really didn't know what to expect.  However, please note that my experience and circumstances may differ than others.

My now fiancé (I just got engaged!) and I recently traveled from Maryland to Maine and back with our puppy, Casey.  He was 18 weeks old weighing in at about 16lbs.  We flew non-stop on US Airways, and their pet policy is that they accept one small dog, cat or bird per cabin for $125 each way, they must remain in their approved carrier/container under the seat directly in front of you, and there is no weight restriction.  They have different maximum dimensions for a hard-sided carrier vs a soft-sided carrier, and I chose to fly Casey in a soft-sided one (which must be 17in long x 16in wide x 10in tall and have ample room for the animal to stand up and turn around). Also, the carrier is also considered a carry-on so I packed a larger suitcase to be checked instead of my usual carry-on sized one, but that worked out for the better since I needed room to pack his food and toys.

I researched and read reviews on so many different carriers that it made my head spin!  I wanted it to be sturdy, but I wasn't willing to pay too much since Casey would be too big to ever fly in-cabin again after the trip.  Ultimately, I just took him to PetSmart and let him try some out and he seemed to really like the Sherpa brand carrier.  I purchased the medium sized one online since it was much cheaper, even though it was 1 inch longer than the allowed length.  I figured if the airline had an issue with it, I could argue that it could be smushed to 17 inches.  After receiving it, I quickly realized it was somewhat of a tight fit since he couldn't stand up, and even though he was able to turn around and curl up in it, he seemed just the slightest bit cramped.  I spent about 2 weeks training him to go inside and getting him used to being zipped up and carried around, and he was fine with it.  I was still a little uncomfortable with the size of the carrier, so I ended up exchanging it for the large size, which is about an inch larger in dimension all around than the medium.  I felt pretty brazen considering I didn't know if the agents at the ticket counter would whip out a tape measurer or not, but I took a chance and went with it.

On the day of the flight, I was a nervous wreck!  We went up to the ticket counter and after checking in, we told them we were flying with a pet.  The guy behind the counter merely glanced over to Casey in his carrier, and said, "Ok that'll be $125".  No measuring at all and I was so relieved!   They gave him a boarding pass, and he was good to go!  Before going through security, we took him to the pet relief area (Reagan National has a nice grassy area outside) where he did his business.  We then carried him over to security, where you have to take your pet out of the carrier to be scanned.  I had initially put a leash on him, but was told that the clasp could set off the detector, so I had to take it off.  I carried him through the metal detector (no body scanning) with his harness and collar with tags on, and it didn't go off.  They did have to swab my hands, so I just knelt down to hold him by his harness while they swabbed my hand one at a time.  The TSA agents absolutely LOVED him and all wanted to pet him, which he loved since he's our little social butterfly, and it also gave us a chance to put our shoes back on and gather our things.  One of the agents informed us that they were a pet friendly airport and that Casey didn't have to go back into the carrier until we boarded our plane, so he sat with us in the terminal while getting lots of attention from other passengers.

We put him back in the carrier before we boarded, and while walking to our seats, one of the flight attendants spotted him and said, "I know who my favorite passenger will be today!".  lol! We were flying in a smaller aircraft (2 seats, an aisle, and 2 seats), and the carrier didn't fit completely under the seat, but none of the flight attendants said anything about it.  It's also a good thing that I'm short or it would've taken up more leg room.  Casey did great!  He either laid down or napped the entire time, because he didn't let out a peep. 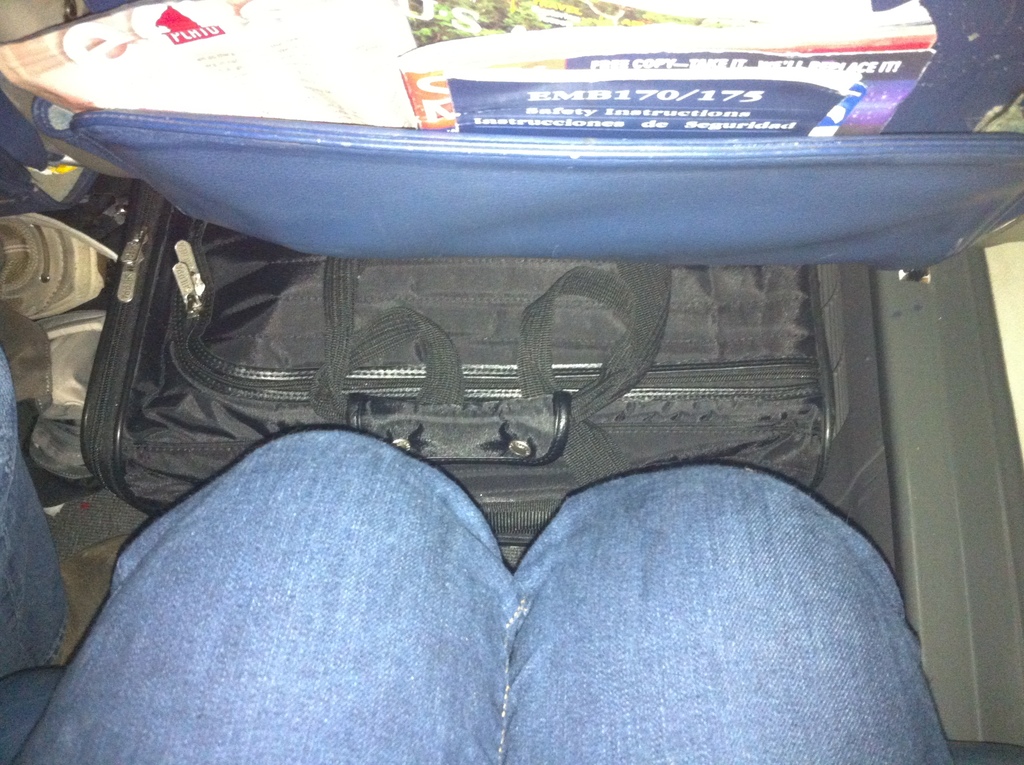 It was pretty much the same experience on the way back as well, except I wasn't sure Portland International Jetport in Maine was considered pet friendly, so he stayed in his carrier while we waited at the terminal. 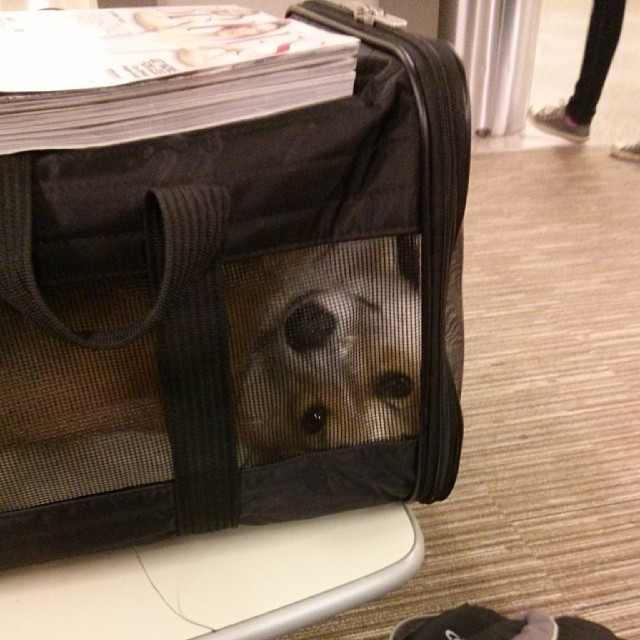 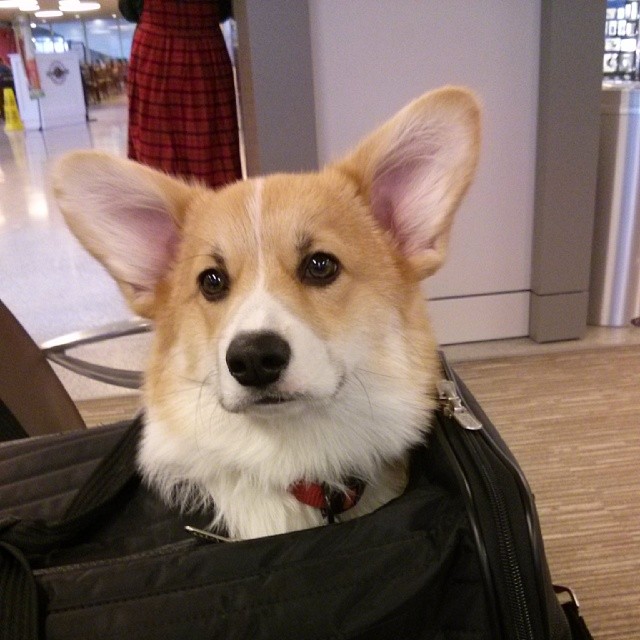 Here he is in the car on the way to the airport.  He loved poking his head out! 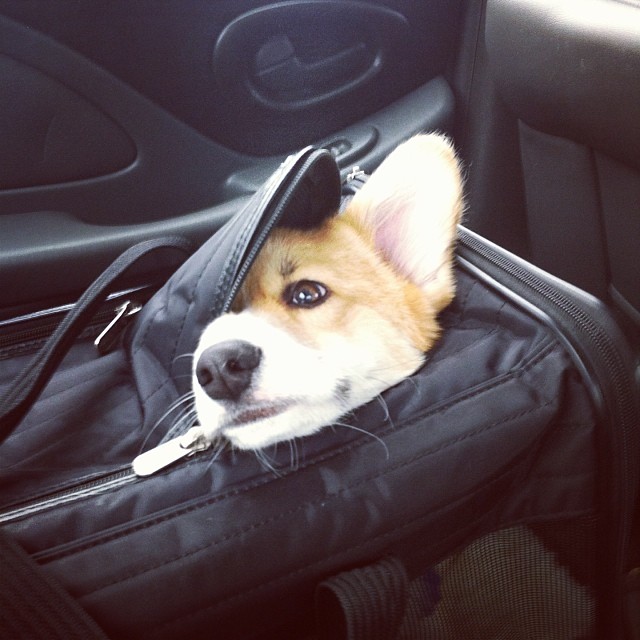 All in all it was an awesome trip for the 3 of us!  I just wish he was smaller so I could fly with him more often. ;)

Judith - I'm glad I didn't have to find out either!  I forgot to mention that because I didn't know how he would be during the flight, I did give him a couple of "calming" treats beforehand.  I'm not sure if they really worked or not because I didn't give him any on the way back home since I accidentally packed those treats in my checked bag, and he still slept during the whole flight.

Munira - Thank you!  I was thinking of putting a Christmas tie on him actually!

Katy - It's so nice to hear he had a good flying experience!  Kudos to Alaskan Airlines for treating him so well!

Anna - Thank you!  That comment made me feel like I'm doing a good job as a Corgi-mom. =)

Leslie - Oh my goodness!  She is just adorable napping in her very own seat and that is so awesome that the flight attendants let you do that!

Vicky - Thank you!  Yes, it was definitely not as stressful as I thought it would be.  I've read stories of flight attendants and ticketing agents giving people that are traveling in-cabin with their dogs a hard time, so unfortunately, I guess it also depends on what mood the staff is in that day or how dog/cat friendly the individual is.

Linda - Maybe I just never noticed before, but I was surprised to see so many other traveling dogs at the airport too!  We met a German Shepherd and Lab (both guide dogs) at the pet relief area, a lady that sat next to us in the terminal had a Yorkie mix, another couple that sat across from us was bringing home a puppy Chihuahua (that started barking like crazy when Casey came to meet her. Haha!), and while waiting in line at the ladies room, the woman in front of me had a Shih Tzu in a carrier.  Makes me wish all flying experiences had more dogs in them!

On the flight home yesterday there were 2 dogs and a kitten on our flight, they were all good.  I noticed that the Atlanta airport allowed the dogs to be walked on their leash thru the airport, saw the same thing at the Albany, NY airport.

Great story! Makes it sound a lot less trying than I've always imagined it would be. :-) 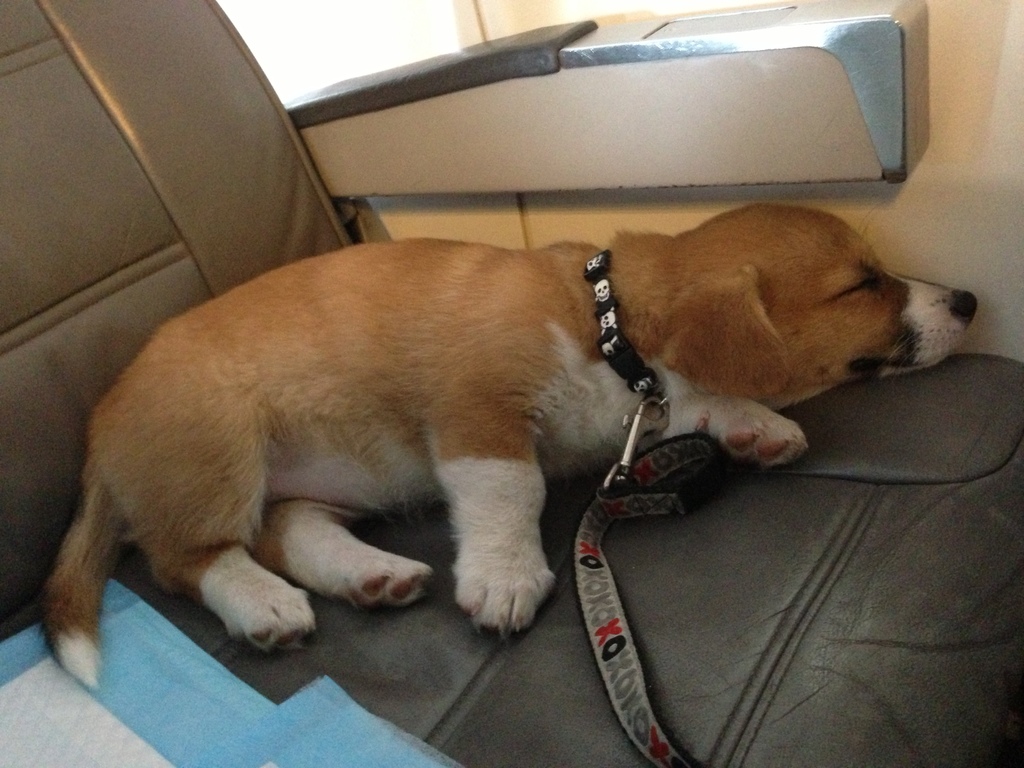 This is Lulu on the plane, dont know why it didnt post before

When I picked Lulu up @ 9 weeks, I had to fly to the breeder as I am in Hawaii and the breeder was on a different island. I bought a soft sided carrier for her, but much to my surprise, the flight attendants allowed me to put her on the seat next to me for the 45 minute flight! The flight attendants came to hover most of the flight. A great experience. Lulu didnt make a peep the entire time and TRICKED me into believing that she was an angel (LOL) She is 9 months old now and not quits a quiet or well behaved!!

We flew from Albany, NY to Atlanta, GA on Monday.  There was a doxie in the seat behind us...or rather under my husband's seat.  He did some yipping while everyone was boarding and then while we were waiting on the tarmac he made some soft "let's get this plane in the air" noises and then settled down till we landed and then let us know to move it along getting off the plane, nothing loud just soft woofs.  There were no problems with the staff on the plane, they kept stopping to see him.  We flew Delta tho I have no idea of requirements.  The doxie was in a soft sided carrier.

Good job doing the preparation work with your pup, that accounts for  90% of your success!!

Comment by Katy on December 27, 2013 at 10:31am
Thanks for sharing! I flew my boy from Minneapolis to Nome with Alaska Airlines (also a nervous wreck) with him in the luggage in a crate. They were very nice, he was well treated during our layovers and I got a little ticket off his crate every time we boarded to let me know he was on the plane. TSA was also nice. He is so handsome your boy is!

OMG!!! Such a cutie! In the pic with his head all the way out, I thought he has a tie on too (flying business class???). Thanks for sharing such a great story!

How cute!  I always wondered what would happen if you took your dog on a plane and it barked or whined the whole time.  Glad you didn't have to find out!