I don’t know what a year is, new or otherwise but, so far, it’s going great!  We stayed up late on New Year’s Eve.  Mum made us pointy hats that had polka dots and our names.  She did this in a hurry (she said) so she said she didn’t have a proper way to tie them on our heads except for Christmas ribbon which was delightful to chew!   Then Mum and Daddy drank pink stuff out of strange glasses that looked like little trees (they had great, long stems) and kissed and shouted “Happy New Year”.  I crowed “Alleluia!” (I was so surprised to hear them shouting.)

It’s been cold ever since.  Lily and I don’t mind, of course; we love to go out and play in the snow.  Lily pushes her way through the snow, slowly, to make paths for me but sometimes I just hop, hop, hop though (even though I’m bigger now); I don’t really get very far.  I love to push my nose into a mound of snow and feel the tiny icy crystals tickle.  Lily says this is silly because it makes my nose so wet so sometimes I pretend I’m looking for something.  But it is hard to pretend I’m thinking about something because it’s so much fun!

Mum and Daddy say I must start learning things soon.  I don’t know what that means but it seems like, no matter what I do, they say “No, No!”  I don’t like that word(s) so I pretend that I don’t hear them and go about my business.  After all, I’m just exploring (and tasting) everything I can.  And now I can stand up sooooo tall!  I can reach the edge of most of the tabletops so it must mean anything on them is fair game.  And when I jump up on the sofa, I can stand on the arm and chew on the newspaper.  When I find any piece of paper on the floor or a chair, I chew it up to make a pile of lovely pieces.   As you can guess, Mum waggles her finger at me and says sternly: “No, No!”  I must admit when she’s caught me red-handed I hightail it to another room but when she comes upon it later, after I’m done, I sometime bark back.  Mum turns her head away when I do this, for a moment then, when she turns back she says “you mustn’t talk back, little lady; that is very rude!”

One day, we did this from right after breakfast until after supper (and I do take a break to eat) and Daddy came out of the back room and said, solemnly:  “What will we do with you, Molly?  You are driving your Mum absolutely dizzy with your naughtiness!”  I listened politely but I had no idea what he meant, especially since Mum picked me up and gave me a big hug and kiss right after.

Lily and I play a lot now, both outside in the snow and in the house.  About this, too, Mum seems to be in a quandary.  She says she loves to see us chase about and play tug-o-war with Squirrley but Lily growls SO fiercely, she says she worries.   Sometimes I decide to show Lily I’m a big girl and I try to bite her – then we fight for a moment.  Mum is beside herself when we do this.  I try to remember not to bite because I am very sorry to see Mum so upset but I am a puppy and I forget.

THAT is what Daddy says.   When I jump up on Matt or Jessica (I am always so happy to see them), Matt yells at me to get down and Daddy always says, “She’s a puppy!” and Matt’s yelling turns into a grumble just below his breath.  When Matt yells at me to stop chewing on his boot or taking his scarf Daddy says, again, “She’s a puppy!” and he rolls his eyes.  That is a very good phrase, I believe.   It even works on Mum, though she always shakes her head when he says it.

I still sleep in my crate at night because Mum is afraid I will go exploring when she isn’t there to catch me.  Mum lifts Lily up on the bed to sleep but, until that time, Lily lays next to my crate.  I think she kind of likes me now.   Mum reminds me all the time that she is a senior (old) and that she can’t do everything anymore. 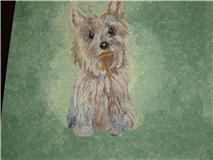 One of my cousins, Patrick (Paddy) went to heaven last week.  I had never met him but he was my Uncle Dan’s best friend.  They said he was a senior, too, and was sick for a long time.  Mum painted a portrait of him for Uncle Dan for Christmas and I thought he looked like a jolly fellow.  Of all her paintings, Matt liked his best, saying he looked like the perfect Australian Terrier.  Mum talked with Aunty Diane on the phone for a long time and I sat by her feet, I was so worried to see her cry.  But they say it was a special blessing that he passed away in his warm little bed, at home.

I guess I don’t know where else someone would want to be.

Comment by Teresa Gilpin on January 8, 2011 at 8:47pm
I was so happy to read the latest installment from Rose Cottage.  I was sorry to read about the loss of a loved one, but am happy that everyone at Rose Cottage is fine.  Can't wait to read the next chapter in Mollys' life.