As Charlie walked with his rifle in the Arizona dese 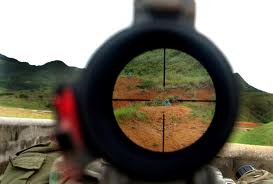 rt far south of Phoenix,  near the old airport where his business was based, he spotted something moving off in the distance. Through the scrub brush and mesquite bushes a small shape moved through the otherwise lifeless desert. Charlie raised his rifle and peered through the scope. “It must be a small badger or something” he thought to himself.  Watching through the scope, his finger away from the trigger, he realized it wasn’t a badger but some sort of smaller animal, not a rabbit or a coyote, maybe some kind of dog, though. He finally came to the conclusion that it was a pup, a mostly black and white one, probably dumped in distant the desert, unwanted by it’s owner. Or it may have escaped from people who sometimes camped in the desert near the airport to ride dirt bikes and ATVs

Charlie hiked towards the pup slowly, calling to it, whistling a little. The pup inched closer, finally lured in by an offer of food. Skinny, half starved, the pup was indeed a dog of some sort, short, stubby legs, huge ears, bright eyes, no tail. The pup was covered with cow manure from the range cattle in the area, most likely it had instinctively rolled in the manure to hide it’s own scent from coyotes and other predators. The Arizona desert is a rough place, a pup wouldn’t last long in any case.

Back at the airport office, cleaned up and fed, the pup was cute, friendly, inquisitive, and got on well with the other dogs that lived at Charlie’s business at the remote airport. Within a two weeks the pup, now called Yoda, had gained four pounds. When he got the chance Charlie took the Yoda into town to the vet to get it checked out. “What you’ve got there, Charlie, is a Corgi” the vet said, “It’s about 9 to 12 months old. They are valuable, we’ll need to scan him for a microchip. If he’s chipped we can find his owners and get him back home.” Charlie was a little disappointed at that idea, the little Corgi had already begun to win a place in his heart.

But Yoda had no microchip, no collar or tags. He was Charlie’s dog now, an official airport dog. Charlie and Yoda both seem very happy about that. 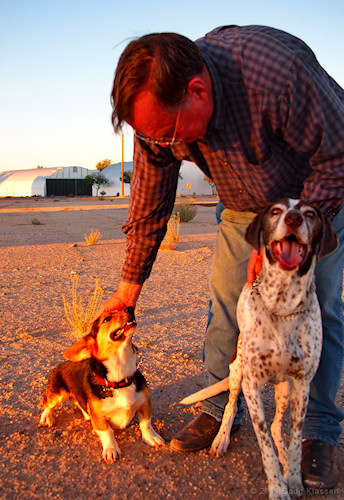 Charlie tells me that Yoda and Charlie's spotted, long legged hound, have become best buds and like to hang out together in the yard at the airport office. The day I met Yoda he’d escaped the yard and when I rode up and parked my motorcycle behind the airport office, out from under an old travel trailer a Corgi pup came out to greet me. I’m a regular visitor to the airport, it’s a very interesting place, a  left over of WWII, and seeing a Corgi there was pretty much the last thing I expected.

So when the pup ran around the building I knew I had to go in the office and see who the little tri-colored corgi belonged to. Charlie and I talked Corgis for a bit and he was glad I’d come in because he hadn’t realized Yoda had gotten out. So off we went and finally found him off exploring with his dog buddy.

After I got Yoda to accept me, he’s still a little wary of strangers, he warmed up to some tummy scratching. As I scratched his tummy I said “You got a good thing going here, little buddy, don’t mess it up again!” 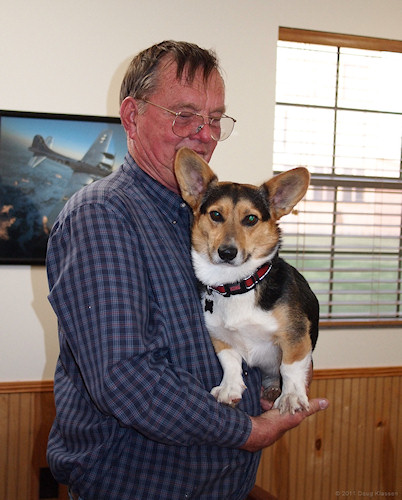 If I found a dog like that, I'd go buy a lottery ticket right away, before my luck had a chance to change.

Glad you guys enjoyed the story.  Yoda's story is one of those nice little surprises in life.  I'm looking forward to seeing him again next time I'm out at the airport.

What a great story! So happy for both Charlie and little Yoda!

Great story! A gift from the desert!

This is a great story!  I'm so glad it has a happy ending!

Such a lovely story -- such a gorgeous Yoda!

one of the coolest stories i have ever read!

Amazing story! I'm so glad Yoda found someone to love him and give him a home. What a handsome boy.