For those of you who read my blog a couple months ago "Something's Missing" you know that Finnigan is a Cryptorchid puppy which means he has one testicle dropped and the other is retained in his body. We've been wanting to get him neutered because I think his hormones are getting the best of him, but because of the Cryptorchidism the vet wanted to wait until he was 8 months old.

He will be 8 months old the end of April so next week we've scheduled his appointment to be neutered. The vet's office is supposed to call us back today with a quote on what the procedure will cost (it's more expensive and more invasive since they have to go into the abdomen and find the other testicle) and we wanted to find out about getting his hips x-rayed since he will already be sedated for the surgery. Now we're wondering if we should get a stomach x-ray too. A few weeks ago Finn was sick and throwing up and the vet did an x-ray at the time looking for something he may have swallowed but couldn't see anything because of what appeared to be built up waste in his bowels (I had a blog on that as well). He was fine for a couple weeks then he threw up a few more times (this time string came up) then he was ok for a couple days until yesterday morning when he threw up two more times. Nothing ever comes up except for the one time we saw string and we're worried maybe there is something in his belly. During the first visit the vet had said if there were an object that wouldn't come out, they would have to go in and get it so if that is the case, during his neutering would be the perfect time to do so since they will be in his abdomen already.

I'm really worried about what all this will cost but I want to make sure Finn is in good health. I guess if we had to skip one of the procedures the hip x-ray would probably be the one though that means if we want to do it down the road he'd have to be sedated again. Does anyone know at what age the presence of dysplasia can be detected? We just want what's best for our little boy and, like everyone else who's had their dog neutered, we're nervous about how he will do during the procedure and how quickly he will recover. The interesting part will be how we take him out to go potty. We live in a 2nd floor apartment and we always carry him down the stairs but I don't know if that will be painful with his stitches... So many things to worry about, I'll be glad when it's all over and he's back to normal.

Thanks for sharing all that information with me. :)

Comment by Kelli & Penny on April 17, 2009 at 6:52pm
oh and the spots on his belly freaked me out, and Finn might get them... it's just basically bruising so if you pick him up and he has them don't worry! It's normal!

Comment by Kelli & Penny on April 17, 2009 at 6:47pm
The drains were only for the hernia... The hernia probably happened due to the vet, he obviously didn't stitch the inner stitches well enough if they popped out that easily.
Every dog is different so your surgery might be less evasive and easier... especially if they can find the testicles right away.
Faulks was a little over a year old when we had the surgery. He was out of it the first day because he was so doped up...the next day he was a little sad but acting more like himself.
I don't know if you'll have to crate Finn, I would only if he's active and runs around a lot for no reason. At least for the first few days.
Here's a picture pre-hernia repair. 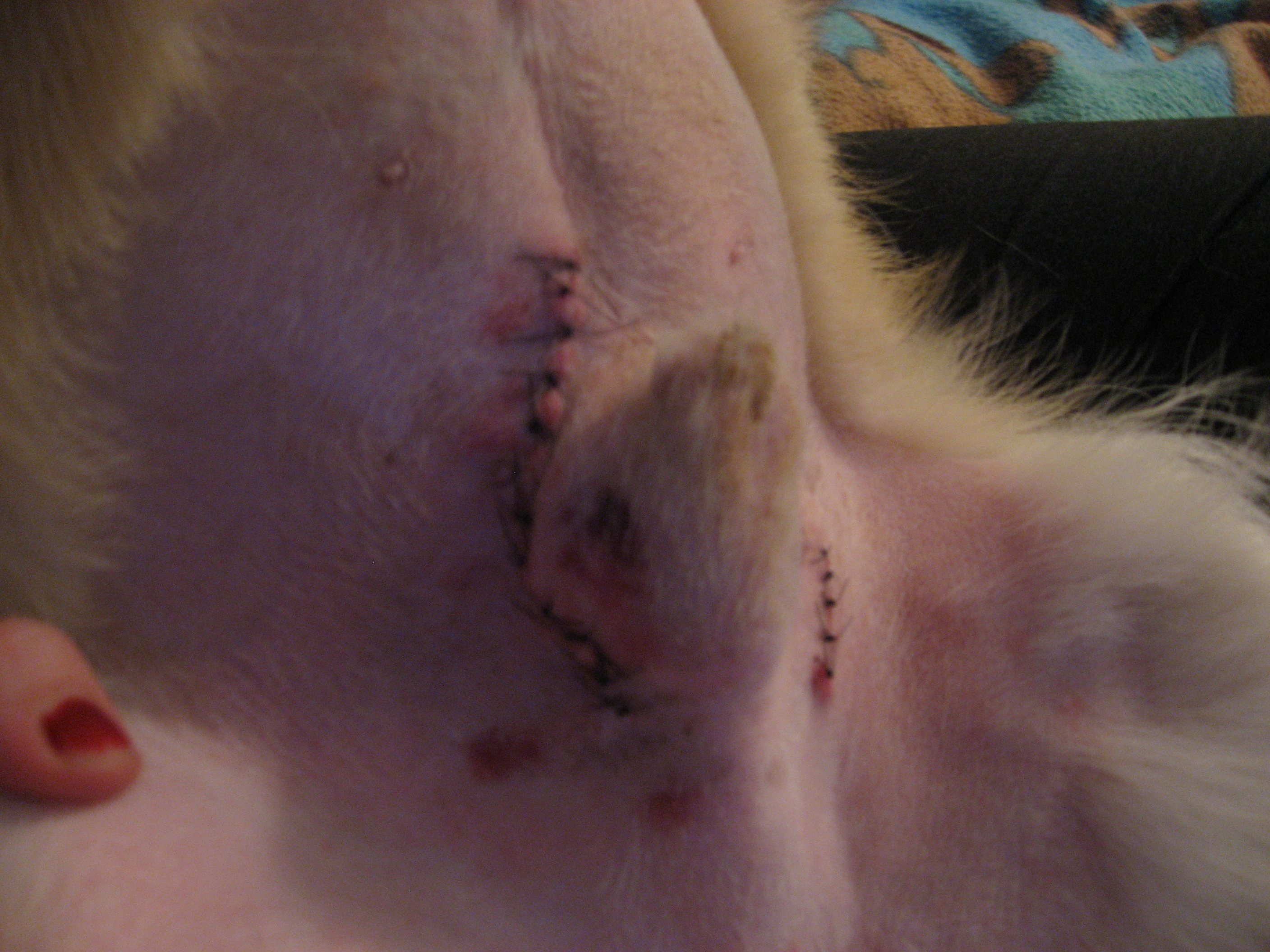 Surprisingly as bad as it looks he doesn't have a single scar from it. I'd say that it went away in 4-6 months completely, but I honestly can't remember. It's been a year and a half since he's had the surgery and you can't even tell.

Comment by Alice on April 17, 2009 at 4:56pm
Oh, how aweful. So the hernia was nothing that you could have prevented. That makes me nervous. Were the drains just for the hernia surgery? I do kind of want to see the pictures so I know what to expect. Does the scar go away completely? Maybe we will have to restrict him to his crate the first couple days to avoid any damage. How long before he was up and about again? How old was Faulks when he had the surgery? Sorry about all the questions but I like to know as much as possible before going into things like this.

Comment by Kelli & Penny on April 17, 2009 at 2:56pm
Oh and the price sounds about right... Faulks was 650? With bloodwork and such, the hernia repair was 150 I think because my boyfriend called up the doctor and threatened him because the hernia was his fault. (He developed the hernia the next morning and hadn't been running around and straining himself at all)

Comment by Kelli & Penny on April 17, 2009 at 2:55pm
Faulks was Cryptorchid as well, neither dropped though! The surgery was expensive and Faulks ended up popping an internal stitch, having a hernia and needing ANOTHER surgery to repair it and then was on crate rest for 10 days. It was no fun.
I would definitely recommend making sure he doesn't move around a whole lot immediately after the surgery... sometimes the testicles can be in really strange places (which was the case of our boy, it was further up inside him) and the incision was very long and obtrusive.
Don't worry about carrying him around to go potty. The first day might hurt but they'll give you meds and he should be good the next day.
I have some pictures of the incision if you wanted to see, it was pretty gross though. (and the incision from the hernia repair as well... it had drains too, ugh so gross.)

Comment by Alice on April 17, 2009 at 2:48pm
So if he did have dysplasia they should be able to see it now? That's good to know. He had a hard time learning to use his hind legs from the get go (but he did get the hang of it) and recently he's started limping on and off (though I can't really tell if it's a front or back leg b/c it's not a very bad limp) so we figured it would be good to rule out dysplasia now and not have to think about it.

The first time we took Finn in for throwing up, the vet did say if he didn't stop, he would want to do a barium series but this would involve keeping him overnight which we probably couldn't afford to do right now with Jason being out of work. He stopped so we thought he was fine but as I said, a couple weeks later he threw up again. This time it was only 2 or three rounds of throwing up as apposed to the all day throw up episode he had the first time. The vet's office called us back with a quote and said if they x-ray the hips they can likely get his tummy in it too so we wouldn't need a separate x-ray for that. when he throws up it's in the morning and it's just bile so I wonder if it could even have to do with having an empty tummy. ??

Though it is a neutering, the vet said the recovery time will be more like a spay since they will have to go into his abdomen. I've never had a dog spayed so I don't know what to expect.

Update: The quote the vet gave us for the neutering and two x-rays is $596 and we would get a 20-25% discount for having United Pet Care. I'm not sure if that includes the pre-op blood panel or not but we definitely want to have that done too. That's a steep price. Looks like we'll have to use the money we got from our wedding to pay for it. I know dogs are expensive but I didn't think he'd be so expensive at this young age. :(

Comment by Cooper, Nora, Grady, Izzy & Jax on April 17, 2009 at 1:35pm
dysplasia is generally something dogs are born with. Male dogs are usually unaware of the fact that they just got neutered and will do just fine with going up and down stairs. The best way to determine if he has anything in his abdomen would be to do a barium series and see if he gets any uptake in his stomach. Hope this helps!