At long last we are moved into our first house! It's not finished, we still have painting left to do and work on the back yard but we had enough done to move in so we spent our first night there last night.

Finnigan hadn't been there yet and while we were packing up our things from my father-in-law's house where we had been staying a little over a month, you could tell he knew something was up. I drove him to the house and before we went inside I took him for a walk. There's a park… Continue

I just saw a commercial with a red Pembroke in it. I thought it was for Zyrtec but I can't find it online anywhere. Has anyone else seen it?

After reading John Wolff's blog about Al and Gwynnie's new tails I decided I should share my own experience with the Gypsies. This is a cautionary tale so do pay attention. Shame has kept me from sharing the story sooner. I now wish I had as I might have prevented sweet John from making the same mistake we did.

On September 15, 2009, Finnigan celebrated his first birthday. We told him we would buy him anything he desired but we could only afford one gift so he better choose what his… Continue 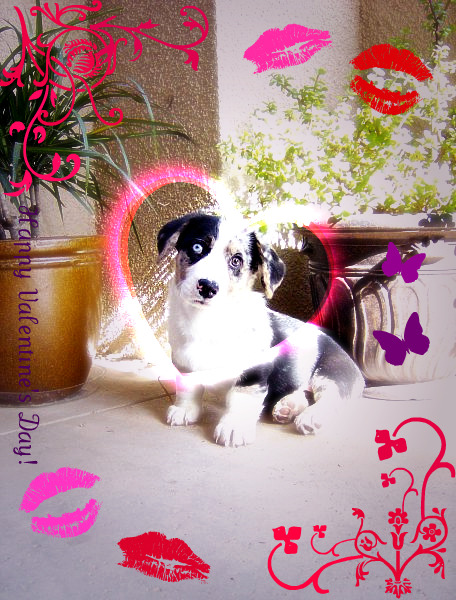 I know I'm a little bit early but I'm sure I will probably be busy this weekend and not on the computer. So is anyone doing anything special for Valentines Day?

Finn is staying with my Mom as of last night and we will pick him up Friday night. I'm so excited to get him back. I didn't think I'd miss him so soon but I do. I just hope he's not overfed or limping when we pick him up. Our apartment complex is doing property inspections… Continue

Finnigan is a year and 5 months and while he has had his share of problems and cause to go to the vet, he had never up to this point had anything that could be deemed an emergency... until last night. Finnigan is fine, not good as new yet but should be soon.

So last night I was watching tv and Finn was sleeping at my feet as usual until my husband and I walked out on the balcony leaving Finn inside for only about five minutes. He was moved…

Help Finnigan Be A Winner!

Finn is entered in the Natural Balance World's Most Amazing Dog Contest and as we get close to the end of voting, I thought I'd ask our MyCorgi family to cast there votes. His odds of winning aren't great since some dogs have over 1000 votes but what the heck, let's give it a shot. :)…

It seems like just yesterday we were bringing home our little boy. The cutest, sweetest little guy imaginable. 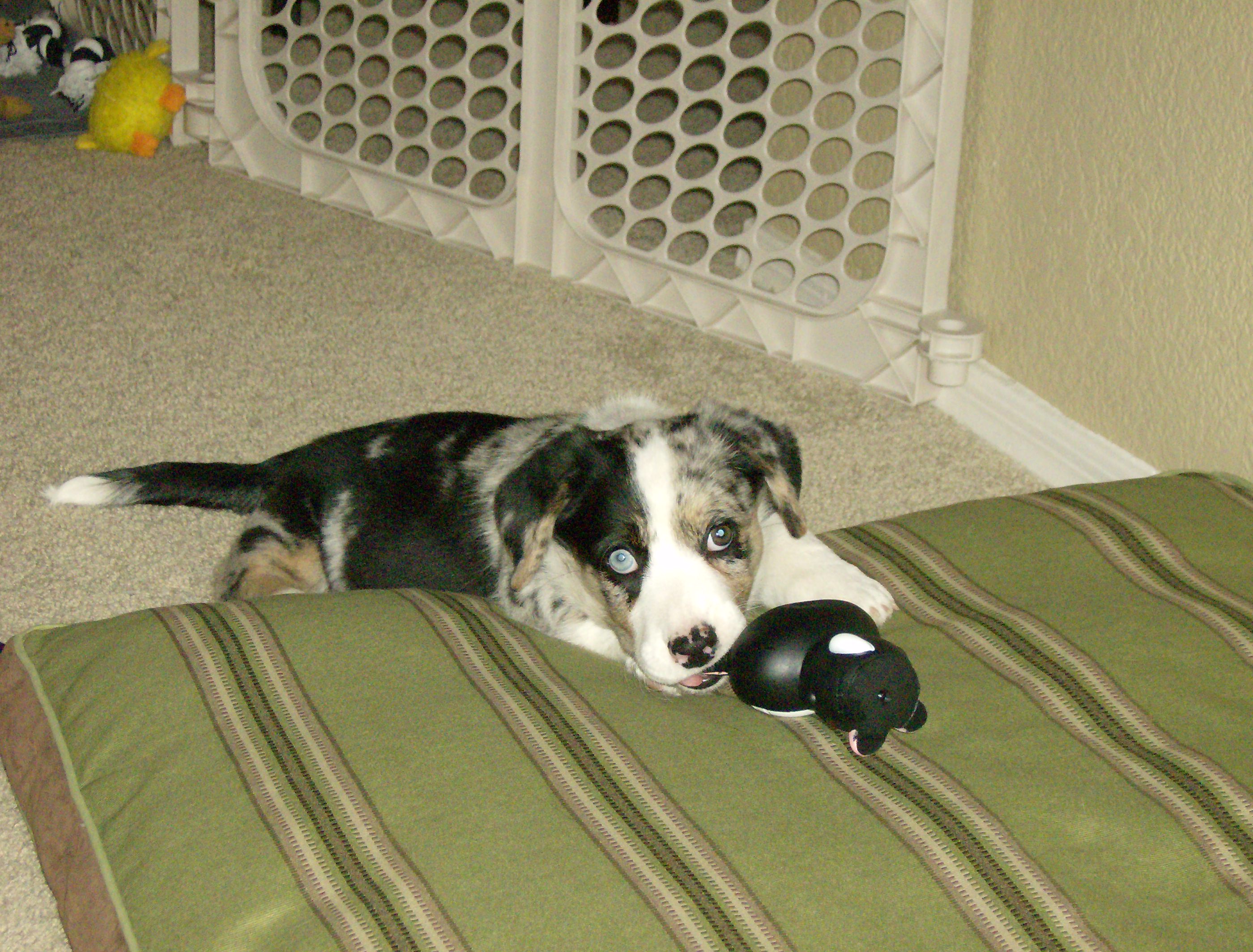 I remember how worried were were about him in the beginning when he wouldn't use his hind legs and now he races around and maneuvers like a pro. It's hard to believe that sweet little puppy has turned into this crazy teenager we have now. I look at him and wonder where my little puppy went. But really, he's turning into a… Continue

Adventure at the Dog Park

Over the weekend we took Finnigan to the dog park to burn off some energy after being cooped up all week while we were at work. He had a great time and met some fun dogs including two huge Great Danes who slobbered all over him. Once he finally seemed worn out we went to leave and as my husband was putting him in the car he saw something from the corner of his eye dart under the car. I got down on the ground to investigate and sure enough there was a tiny baby Quail under the car. He was so… Continue

This is not Corgi related but I wanted to reach out and ask that you send your prayers and good thoughts to my father Eli. He was diagnosed with cancer and the odds are stacked against him. He is currently trying to recover from two surgeries and become well enough to leave the hospital and start chemo. He's been in the hospital for a month now and it's been difficult for him as well as the rest of my family. The doctors have given him a year or two to live and the chemo will help but cannot… Continue

I wanted to get some opinions on the best option for leaving an 8 month old home for an extended period of time. Finn is crate trained and he sleeps in his crate and also goes in his crate when we are leaving the house. Up until now, when we were at work he would go in the crate but I would come home on my break to take him out to go potty and stretch his legs since I'm at work for 8 1/2 hours every day. My schedule is changing and Jason found a job (yay) so he won't be home with Finn all day… Continue

As per my previous post, yesterday was Finn's appointment to be neutered, have his hips x-rayed and check out his tummy in the x-ray as well to make sure he didn't have something stuck in there. There was good news and bad news, so we'll start with the good.

The good news is that Finn's surgery went very well. He has two incisions one of which is low at the base of the scrotum where they usually go to neuter and another on his abdomen (this one is larger). The vet hoped he'd find… Continue

For those of you who read my blog a couple months ago "Something's Missing" you know that Finnigan is a Cryptorchid puppy which means he has one testicle dropped and the other is retained in his body. We've been wanting to get him neutered because I think his hormones are getting the best of him, but because of the Cryptorchidism the vet wanted to wait until he was 8 months old.

He will be 8 months old the end of April so next week we've scheduled his appointment to be neutered. The… Continue

I'm looking into switching Finnigan's food but I was unsure whether I should still be looking for a puppy food or an adult dog food. I talk to a couple different Cardi breeders besides the one we got Finnigan from and one in particular highly recommends not feeding your dog puppy food past the age of 6 months. Here is what she states:

"I do not advocate feeding Cardigans puppy food only beyond the age of four months. From 4-6 months, they should be fed a mix of puppy and adult… Continue

Finnigan woke up early this morning throwing up and hasn't really stopped since. He didn't eat his dinner last night but was more than happy to take treats so it wasn't so unusual, but now he's throwing up and there's nothing in it as far as food goes. At first it was a thick, mucusy and yellow and has now turned extremely foamy (like shampoo) and still has a yellowish tinge and is odorless. We gave him water but he threw that up so Jason took him to the vet since I had to go to work. The vet… Continue

The day finally came. We had our wedding on the 14th so Finn no longer has to worry about being made fun off by the other pups for his parents not being married. :) We've been planning the wedding for the past year and a half and everything turned out great. There were a few issues along the way but they worked themselves out in the end. It was very stressful as the big day drew closer, especially since Jason was laid off a week before the wedding. Talk about bad timing! We had to put aside… Continue

Does anyone have any tips on training your Corgi not to bark? I have a 6 month old male Cardigan and he feels the need to bark at anything that moves or makes a sound when he is outside. He will do this day or night, but night time seems to be worse. When it's dark out he will often bark when there is nothing even there. He goes into this guard dog mode and once he begins the barking, nothing else matters. He's being a great guard dog but that's not the behavior we're looking for. We live in an… Continue

My Cardigan is 4 1/2 months old and still only has one descended testicle. The vet said he would rather not neuter him until the other one drops because if he were to neuter him now, he would have to go into the abdomen and locate the other testicle which ends up being a more complicated surgery and more discomfort for the dog. He said if it hasn’t dropped by 1 year of age, he will have to go in and find it. Has anyone else encountered this problem? I think he called is chryptorchidism and he… Continue

Thank you all for offering your advice on leash training a while back. Finnigan is doing much better with the leash. He will pick it up in his mouth once in a while but when we tell him to drop it he usually will. Since he has received his last set of shots, we're starting to take him more places and his issue now is pulling. When we are out on a walk he will pull so much he'll begin to cough. He started puppy classes yesterday and the instructor said she thinks all dogs should be in a harness… Continue

My Cardi pup Finnigan is now 13 weeks old and we still cannot get him to walk on a leash. He will walk for a minute or two without any problems but once he realizes the leash is on him, he just wants to play with it. He will bite onto the leash and not let go and he sill usually start tugging on it like it's a game. Once I manage to get it away from him he will just do it again and it seems like the more frustrated I get, the more riled up he gets. He will start making these whining/growling… Continue