This afternoon the human had quite the little scare. I'd noticed a potted plant in the front courtyard was fricasseeing in the heat, and so I walked into the garage and dug out a couple of strange little glass watering gadgets that came my way some years ago. You fill up these globe things with water and poke the end in the ground; supposedly the water will then soak, by osmosis, into the potting soil at a stately rate.

So now I walk out through the front door, the two dogs following me, and stick one of these contraptions into the dirt. Walk back into the house. Fill the other gadget -- the water has to drip slowly into the tiny opening, so this takes awhile. Walk back out, stick that one in the dirt. Stand up...look around...and holeee ess aitch ai!!!!!! The front gate is standing wide open.

I'd forgotten to shut it when I walked into the garage and closed the garage door behind me. Cassie is right at hand, but Ruby is LONG GONE!

And wouldncha know it, she doesn't have her collar on!

And a thunderstorm is rolling in. If she hasn't run in front of a car yet, about the first time a lightning bolt comes crackling down, she surely will.

I run out into the front yard and holler. She is NO WHERE to be seen. By now she's had time to get halfway to Yuma.

However, Cassie has followed me. When I give up yelling for the pup, Cassie walks down to the curb, looks around, and emits two loud calls:

And darned if that little dog doesn't come flying up the sidewalk out of nowhere!

Not only that, but she lets me catch her and pick her up. Amazing!

Ruby has never been outside the yard off the leash in her entire 16 months of life. Her enthusiasm for coming to call is intermittent, depending on what exactly is distracting her at any given moment. I do give her a treat every time she does come to call, but the overall result of that has been that she's trained me to give her treats pretty much on demand.

But interestingly, from the time Ruby was very tiny, Cassie has been calling her to come inside. Whenever I go to the back door and call her and am ignored, Cassie steps out onto the back porch and BARKS HER IN. Several sharp barks from Cassie will usually bring Ruby up to the back door. And when she's hiding in the house, if I say to Cassie "Bark Her In," Cassie will bark and Ruby will materialize.

In fact, I actually have succeeded in getting Ruby to come to me by imitating Cassie's come-hither bark.

So what we have here, I guess, is a dog that comes to bark. 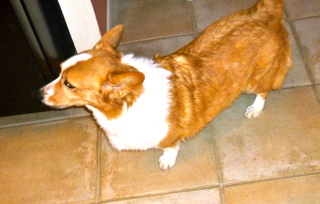 The Queen of the Universe Will Be Obeyed.

Cassie has been doing this since Ruby was a very tiny pup, long before Ruby got big enough that Cassie needed to put her in her place. Within a week after Ruby arrived, I realized that Cassie was arfing her in...weirdest thing! She didn't do it with Charley, so I have no idea where that behavior developed.

In my experience (which as we know is not what you'd call "all-encompassing"), the glass watering bulbs aren't great. They tend to release all their water at once, rather than (as advertised) dribbling it out over a few days. There may be a trick to it that I haven't figured out, though.

Cassie, she talks the Ruby lingo. (Also, you have probably never nipped Ruby for civil disobedience, which I expect Cassie, Queen of the Universe has, when Ruby tried to usurp her authority!)

Also, I never knew what those glass things were. We have a local Camphill community that has a craft store which sells these, but I thought they were just decorative baubles.

@ Lois: Apparently so. Either that or Ruby has both Cassie & me trained.

It sounds like Cassie has both of you trained!  I am well trained also.