Story of the Welsh Corgi

by Anne Biddlecombe Reprinted with permission of the Welsh Corgi League

Would you know where Corgis came from? How they came to live with mortals?

On the Mountains of the Welsh-land In its green and pleasant valleys, Lived the Peasant folk of old times, Lived our fathers and grandfathers; And they toiled and laboured greatly With their cattle and their ploughing, That their women might have plenty. And their children journeyed daily With the kine upon the mountain, Seeing that they did not wander, Did not come to any mischief, While their fathers ploughed the valley And their mothers made the cheeses.

'Til one day they found two puppies Found them playing in a hollow, Playing like a pair of fox-cubs. Burnished gold their coat and colour, Shining like a piece of satin - Short and straight and thick their forelegs And their heads were like a fox's But their eyes were kind and gentle; Long of body were these dwarf dogs And without a tail behind them.

When the men came home at sunset Saw them lying in the basket, Heard the tale the children told them, How they found them on the mountain Found them playing in the hollow - They were filled with joy and wonder Said it was a fairy present, Was a present from the wee folk, For their fathers told a legend How the fairies kept some dwarf dogs. Called them Corgis - Fairy heelers: Made them work the fairy cattle, Made them pull the fairy coaches, Made them steeds for fairy riders, Made them fairy children's playmates; Kept them hidden in the mountains, Kept them in the mountains shadow Lest the eye of mortal see one.

Now the Corgis grew and prospered, And the fairies' life was in them, In the lightness of their movement, In the quickness of their turning, In their badness and their goodness. And they learnt to work for mortals, Learnt to love their mortal masters Learnt to work their masters' cattle, Learnt to play with mortal children.

Now in every vale and hamlet, In the valleys and the mountains, From the little town of Tenby, By the Port of Milford Haven, To St. David's Head and Fishguard, In the valley of the Cleddau, On the mountains of Preselly, Lives the Pembrokeshire Welsh Corgi, Lives the Corgi with his master.

Should you doubt this ancient story, Laugh and scoff and call it nonsense, Look and see the saddle markings Where the fairy warriors rode them (As they ride them still at midnight, On Midsummer's Eve at midnight, When we mortals all are sleeping!).

That is beautiful.  They are little fairies, fleet of foot and kind of heart.  They sleep beside me and show their love for all each and every day. 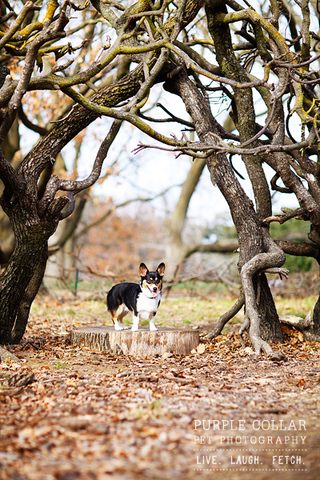