The Ineffable Longing for Ducks

DUCK continues to cultivate Eggs. She roams off a little more often now that all the eggs seem to be delivered to Nest and she's maybe less tired than she was. After a foraging foray, she comes back (as all wild ducks do) to Lake and floats around for awhile, getting her underside amply wet.

Duck eggs need a degree of humidity as well as degrees of maternal body temperature, and the occasional dip in the drink is how a  mother duck arranges that.

Ruby and Cassie are astonished. 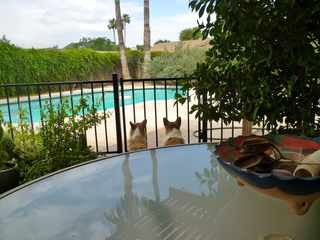 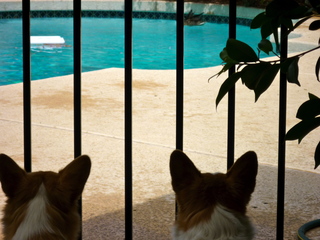 We're beginning to introduce floating things into the pool, one at a time so as not to disturb DUCK unduly. She wasn't fond of the Styrofoam ice cooler lid, but before long she decided it was harmless.

The ducklings will need several floating islands if they are not to drown in the swimming pool. Even with the water all the way up to the coping -- decidedly ungood for the Cool-Decking -- the ducklings will not be able to get out of the pool until their wings develop enough to help lift them four or five inches. As newborns, they can drown in three inches of water.

So we will add floats, one at a time. And then before the the babes hatch, we'll jury-rig a couple of ramps that will allow them to waddle out of the pool, which will stay in place until we see that the entire duckling menagerie can get out on their own.

As long as Harvey the Hayward Pool Cleaner is attached to the skimmer inlet, the ducklings should be safe from being sucked into the system -- the pump is very strong and will be hard for them to resist unless the skimmer inlet is blocked by Harvey's hose.

This will not be good for Harvey. At the present time of year, more debris than Carter has oats blows into the drink. This stuff has to be cleared out before letting Harvey run loose, on pain of endless repair bills. Plus I can't have the palm trees trimmed, because DUCK has conveniently parked her nest right under one of the damn things, so when Gerardo's men are up there, they'll drop a palm frond on her.

Palm fronds can and occasionally do suffocate or otherwise do in palm tree workers. They're heavy and dangerous. It's not something you want dropped on a duck and her eggs. Or on you. Or on your men. Bad palm trees. Wish I could afford to take them out...but I can't.

So we'll have to put up with a great deal of pool clogging, grub-infested, cockroach-nurturing, algae-breeding palm-tree mess until such time as the ducklings are fledged and on their way.