Cassie has names for her many toys. True! She actually recognizes them by name and will fetch a specific item when asked, say, to "Get the Bluebird of Happiness!" These critters come from Costco in gigantic batches, so she has a multitude of the things; in the case of the goofy-looking birds, there's the Bluebird of Happiness and the Redbird of Joy and the Pinkbird of Ecstasy...and amazingly, she actually can identify them by name.

At any rate, one of these objects is a gigantic stuffed jack, like those little metal jacks we used to play with as girls, only about two hundred times bigger. It is known as The THING. Cassie and Ruby both like to play with it, and on occasion (very brief occasion) they'll even play tug-o-war with it.

Out of the blue, it entered my feeble little brain that one could tie a piece of clothesline rope to The THING and wave it around at Pup like it was a cat toy. So on a whim, I tried this stunt.

After a while, this got a little old for the human. So I tried tying it to a doorknob.

Unlike kittens, corgi pups are not interested in things slung from doorknobs. Apparently.

However, a previous owner of this house must have had a string of lights along the back porch eaves: there's a long row of old, sturdy cuphooks lining the fascia board.

Hm. Hooks...rafters...rope...THING...pup...why not? So it was onto the stepladder to tie the THING to the eaves. And here's the result: 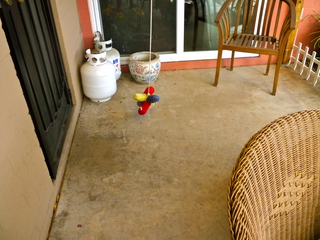 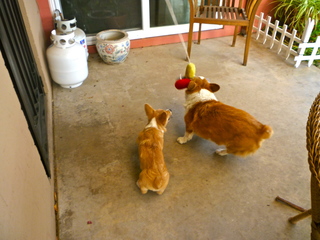 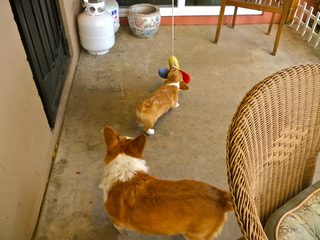 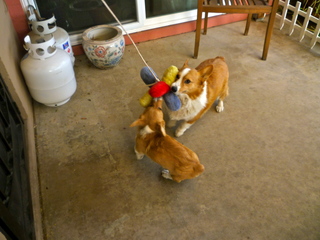 They haven't stopped playing with it since it went up. :-D