We would love to attend.....The corgis would have fun, we are hoping to find a new addition, we are searching for a red female to come to our great home,

Do you pictures to share, and could we google where the next meet is,,,

Love you all Corgis....Corgis rock!

Happy Belated 9th Birthday Chepstow....Lance would have been nine at the end of Ocotber!!!  Hope it was a great day!

Thank you for the welcome. We are already enjoying a great response on a question on the debate pages :-)
I thought they were more common in the UK; after all, it is the country where the breed has gone royal ;-) We live in the second biggest city in DK with lots of dogs in the parks, but we have only seen 1 corgi (cardigan) besides our own so far.

awww, thanks for the sweet words.  All corgis are stars, they are the best.  <3  Hope you are all doing well.

Hello. His name is Rico.  I wish I would have known about it this year. I would have attended. I will definitely attend it next year!

Thank you so much for you kind words we already very much in love with our boy :)

Mocha and Frederick said…
We will look into attending the NC Picnic. Thanks for the heads up :)

Hi Laurie.. you've probably seen this toy,but I'll post just in case.  I bought one of these for my kids this past Xmas.. it's almost like a custom stuffed animal for our Tenby's!  Even has a bit of black mixed in the red head.

Our "bratty sweetheart" is almost 3.  We got him from a breeder in Eden NC. (We live in Fairfax VA).  He looks amazingly like your Tenby!  His head was almost all black when we got him at 11 weeks old....reddened over time.  He's very smart...always knows when it's time to go to the bus stop or when the dishwasher is being loaded.  He' s lovable (wants to cuddle on the couch when it's Netflix movie time) but also very stubborn and definately has some bad habits.  He's very social with other dogs (has lots of neighborhood buddies and likes to get together with them) but I'm not sure he's mastered the social graces when he meets new dogs... barks at them loudly to try to say hello...they don't always want to say hello back!  Some of his bad habits...sigh... making a mess of his water and throwing his food bowl when he's hungry, stealing food off the edge of the table from unsuspecting kids,  stealing things to initiate a fun chase, lightly nipping at our thighs when he really wants something (yeah, this is a bad one we have to work on!).  He's definately better behaved when he gets the attention/stimulation he needs.  I'm trying to take him with me more when I go out.   He's definately all Corgi... highly highly motivated by food, won't come when he's called unless there's something in it for him, pushes limits!  At the same time, he wants to be part of everything social in the household...my husband will wrestle with my 10yo son and Tenby comes running to get in on the action.  When kids play basketball, he's the ref.

He has definately mellowed with age some and I'm hoping for more mellowing, but I know some of his bad habits, we just need to work on ourselves.  He has just trouble controlling his "enthusiam" for life. :) Has your Tenby mellowed with age?  I love the name Chepstow!

Hi! Thank you! Happy to be part of the community =)

Wilson is doing great !  His soft puppy fur is gone.  I told someone today that he looks like a full grown Corgi that was shot him with a miniaturizing gun !  He is so cute!   It's still pretty cold here on the Cumberland Plateau, but the days are getting a little warmer.   I can't wait for spring.  Thanks for staying in touch.  Stay warm !  Joyce and Wilson 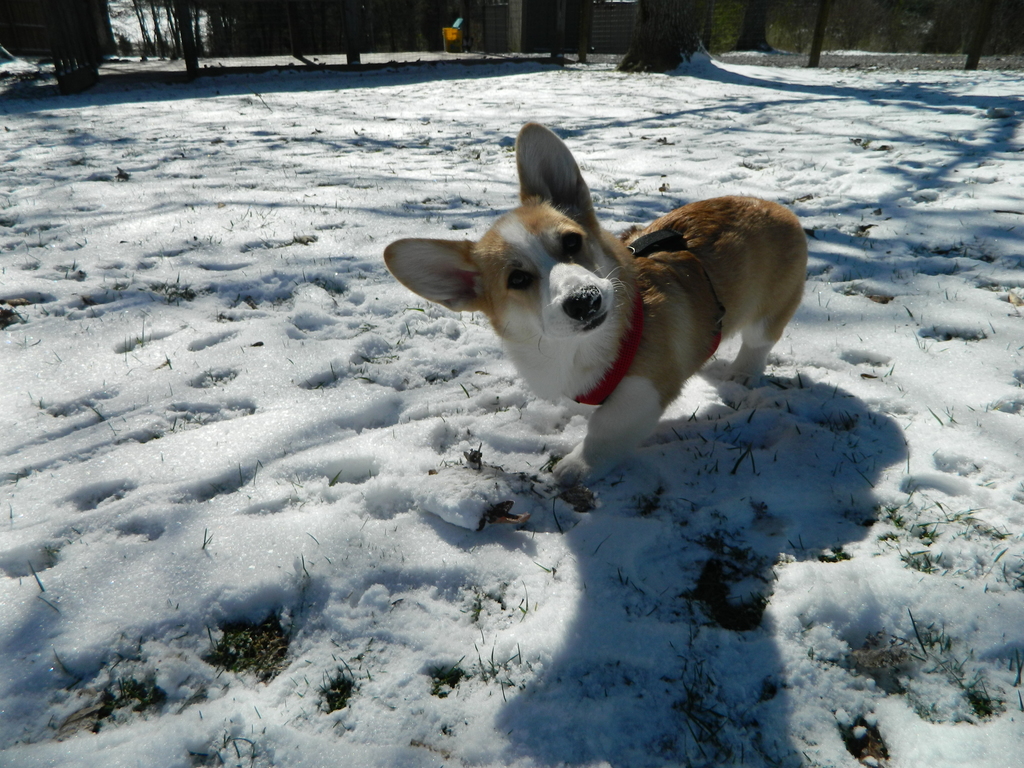 Laurie, thank you so much for the awesome cards!! (we posted a photo in the secret santa discussion) You do beautiful work!! Merry Christmas to you and your family!! :)

oh Tommy is goofy without a DOUBT.  I didn't realize that was a tri trait!!! Your boys are beautiful by the way!

Hope you guys are having a great time in Florida! I'd sure love to be there right now instead of in Cleveland ... although our weather has been good so far ... fingers crossed!! :)

Elizabeth Throneberry said…
Hello Laurie and roger! I'm Elizabeth I had you as my corgi gift exchange. I sent out your gift to FL and it should be there Monday so if you not there that early you can let your daughter know to be expecting it :) wanted to make sure you got it. Merry christmas!

It sounds like fun! Unfortunately we just took our last trip and are winterizing this weekend:( The Farmer's Almanac has predicted an unusually cold winter starting in Nov for the Carolinas! Nothing like seeing a Corgi romp in the snow!

Thank you for welcome. Your dogs are cute.

Funny; I think of puppies as "so much work."  I'm just happy to give these poor abused and rejected guys a home where they can feel loved, and can blossom.  And boy, do they, even if the heaviest baggage never goes away completely.

We got William as a runaway about 10 years ago.  The rescue organization said he was about 1 1/2 years old based on dental, but we suspected he was younger.  His tongue was too long to fit in his mouth, so he drooled incessantly.  He was very poorly socialized, but at least housebroken.  He eventually grew into his tongue (mostly) and has learned basic social skills, but I swear, the dog is ADHD.  He was a real challenge to train, and never got past basic commands.  He's very bright, really wants to please, and you can see he understands we expect him to do something specific.  But he clearly struggles desperately to keep anything in his head for more than about 15 seconds.  Rescue dogs have their issues, but they are definitely worth the effort.