OMG...whatta mouth. Didn't mean to barge into the Corgi weight issue. But, since I did, hello to you, Doug, G & S. And a big shout out to mycorgi.com and all my old friends on this site. Hope to get back soon. Sometimes life interferes with Corgi fun. But, my life, knock wood (!) is good stuff, just busy. Hope it stays just good stuff. Love to you Doug and your beauties. Love to all mycorgi people, and a shout out to Sam!

I don't know if you saw the post in the ARIZONA CORGI group but
HI!

CORGI MEET IS IN FULL SWING ON FEB 22ND AT 8:30AM - CHAPARRAL DOG PARK IN SCOTTSDALE! I WILL POST A SIGN ON THE PARK WE WILL BE IN!(Sorry that was in all caps that part was a copy paste!)

Do you think you could make it?

Thanks for posting Obesity in Corgis.  I have seen a lot of FAT Corgis.

I keep My Wynne between 23 - 24 pounds and Will between 27 - 28 pounds.  We weight them monthly.  Then we adjust their food if we see a gain or decline in their weight.

I just saw a really fat corgi yesterday.  She mentioned that he was a rescue and timid.  I assumed he was a recent adoption and so I said something about his weight and it was good that she could now help him slim down.  I assumed wrong.  No, she had him for years.  She said his weight was due to neutering.  I told her NO...mine were both neutered and not fat. I hope I got her thinking.

I will use this quote you included the next time I meet a Corgi when the owner tells me they are over 40 pounds, but just big boned.

Note:  The Pembroke Welsh Corgi Club of America breed standard says the following:  "Weight is in proportion to size, not exceeding 30 pounds for dogs and 28 pounds for bitches [females]."

It sounds like Waffles, the corgi in the post, is doing a great job on blowing his coat. I only hope I can become a champion coat blower as well!  <3 Thanks again for all the great photos you sent Mom. I really want to meet sister Sparkles and Uncle Gromit, maybe this year we will find a way to come together...

Has Sparkles blown her coat yet? I just made the switch from puppy to adult food in February and Mom wonders if the dog food is aiding in my extreme furring efforts.

How is Cosmo dog park in Gilbert for you?

Hey Hey! What do you think if we make the meet up officially in Ahwatukee? Could you help me advertise it for the Tucson or just southern Arizona in general?

I love your pictures of your dogs.

Thanks for the super cute Holiday Card <3 What are we doing for Sparkle's b-day?

Wow! Scott (my husband) was mentioning the same day as the picnic that there should be a "grand" picnic in the spring time... If we plan one we should use Vicky's contacts to get some people to show! hehe!

Thank you for the lovely photo!

It was great meeting you guys and girl in person today!

Hope it wasn't the last time we catch you around!

Hi I hope to meet you guys at the picnic! We don't know many corgi owners in AZ!

You did it!  I ask for pictures and you delivered.  That was fast. Thanks, Lisa

Cheryl Boiko said…
Thanks Doug for your compliment on my new profile picture. Thanks so much for letting me "borrow" your precious Gromit and Sparkle for such a lovely doggie portrait. It's so much more fun to hold real corgis instead of stuffed ones!

I am looking forward to some new pictures of your gorgeous Corgis.  I am especially interested in how Sparkle has developed.

This summer was difficult.  We stayed home more.  We did not want to sit out at car shows or go to the dog park in that heat!  Today we will take our two Corgis to a car show out of town.  The weather is perfect!

Need some new pictures of your pups!

why didn't you tell me you guys were on the Daily Corgi! great video!!

Thanks for the love, family! Hope to keep in touch here! 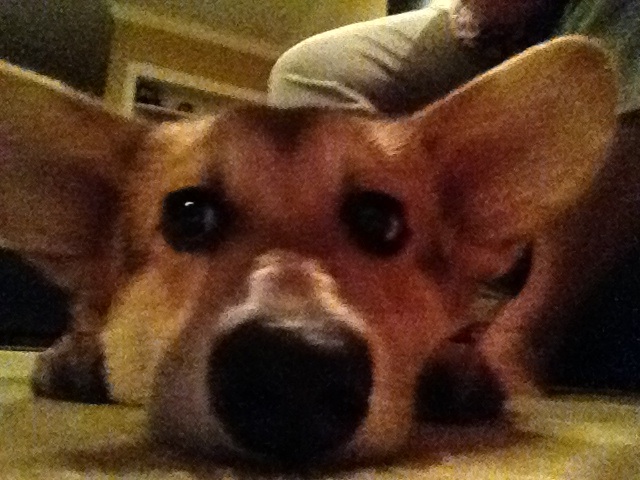 steve ruggles and Ziggy said…
Auntie ziggy. Hilarious  she was in the local paper with me recently.  She definitely increases the eye balls on the page.