Ok. Here's the story. This past weekend me and Bailey do what we always do - go have fun! Well this past weekend, we went to Fort Funston (its doggie heaven for city dogs) - lots of offleash grassy and full-of-trees space away from traffic and even a trail down to the beach for some fun in the water. Well.. We were walking along the route, Bailey stopped to play with a couple puppies in the sand, and I hollered "come on lets go" and he ran right over to me like the cutest thing ever. Anyways, as we were walking back to the parking lot later, A woman and her two scottish terriers were walking in the opposite direction. Bailey was lagging a bit, so I said "come on!" and he started trotting forward. Right when we are about to pass the lady with the two terriers, she murmurs "here comes trouble".

Well, my question is - I know she was directing it to us because it was clearly obvious. I did not say anything… and it hurt! Who would think a corgi is MEAN?? I mean his sweet face and all - but not to agree with the terrier-woman, but I have to say that this isn't the first time. We went to another dog park on another weekend and they're shocked Bailey is so nice, sweet, brave and playful. They perceive corgi's to be aggressive (this particular lady had a golden retriever). Everyone (who doesn't own a corgi and knows about the breed) seems to think corgi's are malicious mean barky animals that cause trouble.

Just wondering if anyone else has run across this situation.. Or are these just more or less two isolated cases?

Permalink Reply by Geri & Sidney on July 24, 2008 at 4:41am
I guess corgis are just not too common here in SoCal. Most folks just don't know what Sidney is, and I've never had a negative reaction from those that do know "he's one of those little welsh dogs" (LOL I love that one!). Well, we've only had him 7 months, so maybe that day is still coming, but so far everyone we've met who are familiar with corgis love love love them!

Permalink Reply by Nancy & Owen on July 24, 2008 at 1:25pm
Hehe, when I went to the park a while back, a lady asked me if Owen was a yorkie! :P Not sure how you can confuse a yorkie with corgi, except that they sort of sound the same.

Permalink Reply by Caitlin on July 28, 2008 at 4:42pm
Funny you say that, I got the exact same thing a couple of weeks ago! Some guy in the park asked if Penny was a yorkie! It probably is because they kind of sound the same.

Permalink Reply by Karen & Bailey on July 28, 2008 at 5:11pm
us too! one time. its defintely cause the name sounds familiar - i dont think theyd mix it up based on appearance. lol.

Permalink Reply by Mister Jack on August 24, 2008 at 9:10pm
Some one decided that Jack was a Daschund mix, then proceeded to tell anyone who asked just that! Finally, after three people had asked, I corrected him and said Jack is a Welsh Corgi. He was quite shocked. Not sure how he got them mixed up. :/

Permalink Reply by Haley Merlot on December 22, 2010 at 9:03pm
Could be worse--someone asked me a few months back if Donny was a pitbull! I was at a loss for words. I mean, pitbull?

Permalink Reply by Laurie on August 24, 2008 at 10:26am
We were at PetSmart and someone asked me what mixed breed Rosie was. She said that she knew my dog was part Sheltie but she couldn't figure out what else she was. I also had someone at our local park make the remark that she had never seen such ugly dogs before. I just ignored her. You can't help it if other people have bad taste and are rude.

Permalink Reply by Karen & Bailey on August 24, 2008 at 12:03pm
ohh the "legs chopped of" or "where are your legs" is a comment we get a lot, but i think most of the time, they mean good. never ran across someone who actually thought they were seriously chopped off! 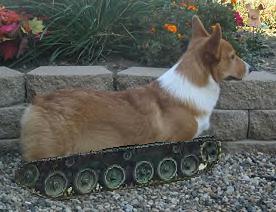