It's really a long story, but please read until the end.  I'm pretty sure it won't disappoint you.  Please have some tissues ready though.

When we picked Dee Dee up from kennel (dog hotel, really) back on August 13, we immediately knew something was wrong with her.  She was trembling, and when I touched her face, she yelped.  I went back inside and talked to the workers, and they had no idea or noticed anything wrong up to that point.  I trust them since Dee Dee has been going there for years since they opened, and I knew they really liked her.  But it's really hard to keep an eye on your dog at home, so at kennel, it would be really hard to notice anything wrong...

I took her to the vet next morning, and the vet couldn't tell what was wrong with her, but she could tell that she was in pain.  They gave us pain medication.  They checked her neck and spine too, but she didn't show any particular area that hurt.  My family was visiting (from Japan), so I took them out for lunch and decided to wait until giving her the medication until we can be home to monitor her with new medication.  When I got home, she was curled up in the corner of the bathroom, trembling more, looked like hard to coordinate balance, and drooling.  For a second, I thought she was having a seizure, so I called the vet immediately, and took her in. They said she was not having seizure, but just in a lot of pain.  They referred us to emergency clinic where they have ultrasound.  X-Ray and blood test were done, but nothing...  They did checked her neck and spine again, but she still did not show any sign of particular pain there, so they suspected GI issues.  She had ulcer in April that took forever to heal, so they thought it might had something to do with it.

At emergency clinic, (at this point, I'm just crying and crying...) the doctor did the neck and spine test again, and this time, she yelped hard.  The vet said he saw slight narrowing in her neck area, and suspected the Disc Disease.  He said to keep her quiet and on "crate rest" (like bed rest, but not as strict as bed rest).  He gave us steroid hoping that swelling will go down enough that she can be more mobile.

Next day, she still seemed in pain, but we kept going because we could see that she was still so happy to eat food (so Corgi, right?!) and looked happy when we gave her a cookie.  But then, I started to notice some neurological symptoms, such as preferring left side and going around in (big, but) circle.  Then, she started having "accidents" inside the house.  She hasn't had any pee accidents since she was about 1 1/2 years old!  I was concerned, so made an appointment with a Neurologist.  We talked to her, she observed Dee Dee, and she agreed that she may have some neurological problems.  We decided that we needed to know what was wrong, so went for the MRI.  I knew it was going to be really expensive, but lucky for us, we were planning on buying a new fridge, so the fridge fund just became Dee Dee's MRI fund.

When I got a call from the vet, it was devastating.  She said it was bad, and asked me if I "wanted to wake her up".  What?!  I was confused.  She said that some owners choose not to wake them up since they are already under the anesthesia and can go peacefully.  I wanted to be really selfish, and said, no.  I hadn't said my "good-bye" to my girl, and wanted to have that chance.  Not to mention my husband and I always talked about when the time comes, we want to let her go either at home or in the car (where she loves), not on the cold metal table at vet's office (where she hates).  The vet showed us the MRI, and she was right.  It looked really bad.  She said it seems like she has a pretty big tumor on left cerebrum.  As I listened to her, I looked at Dee Dee and just cried.  She wasn't looking at me, but just stared at the corner of the wall...

My husband and I decided that we will see how she does at home, and make decision on what to do.  When we got home, she walked and walked and walked.  She didn't know when to stop, and just kept on walking.  She has forgotten how to sit or lay down still.  We had to forcefully make her sit, and only then, she realized she was tired and she rested.  We really thought that was the last night we would have her.

But then, we started to see a little bit of Dee Dee the next day.  She sat on her own, reacted to her name, and slowly, she was coming back.  The vet said that symptoms were from the swelling around the actual tumor, so the swelling must be coming down.  In about a week, we had (almost) old Dee Dee girl back.  But we knew this was temporary.  That darn tumor was still there, and take her away in matter of days?  weeks?  But at that point, I was just so thankful to have that opportunity to see her wagging tail, coming when her name is called, and smiley, slimy kisses.  :)  When she gave me a kiss, of course I cried.  My eyes were just constantly red as you can imagine.

When we were with the Neurologist, she told us about the clinical study happening at UC Davis Vet School, and she said it might be worth contacting them.  We talked to them, and decided to go for it, not because we wanted our Dee Dee to be the lab rat, but this was the only chance to actually remove the tumor, possibly have longer life with quality, and at same time, eventually save dogs and humans with brain tumor.  We wanted Dee Dee to be not only just a cute Corgi, but to be a part of the legacy of helping future brain tumor patients.

We met with the professor and residents, and both my husband and I felt comfortable leaving Dee Dee in their hands.  We didn't want to do it somewhat because steroid has worked so well, by then, she was almost like old self.  The decision would have been easier if she was visibly sicker.  But the professor (vet) said that she has less chance of complications when she's well... so as hard as it is, now is the better time.  What made us feel better about this was that 1) we could quit any time, any stage of the trial, and that was completely up to us, 2) they remembered all the names of the previous dogs who went through (or started) this trial, and 3) of course, I hate to say it, but they were going to pay for all the treatments.

Next day, they called and said that she had ultrasound done, and her GI looked pretty good.  They informed us that they will perform biopsy in the afternoon, and let us know how it went.  The call came in the afternoon, and the vet said "I have a minor bad news and really good news".  I was expecting that good news was the her tumor is the tumor they are studying, and she qualifies for the trial.  He said, "the minor news is that we had to shave Dee Dee's head.  The good news is that she doesn't have a brain tumor".  I couldn't believe it.  Did he just say Dee Dee doesn't have brain tumor?  Did he?  Really?  I had to ask him again and again.  He was laughing because he said that these are the types of news he loves to give, but don't get to as often.  He was talking so fast, I just had to ask again.  Are you sure??  I was crying again, but this time, for once, it was tears of joy.

He said that at last MRI, she must have had big hemorrhage in her brain, appearing to be a brain tumor.  He said after they shaved Dee Dee's head, she was ready for drill and needle for biopsy with CT Scan guidance, so they can go into the exact point of tumor they want.  When they looked at the image though, there was nothing to biopsy on.  They were puzzled, so they took her to the next room to MRI which you can see image of the brain much better.  They confirmed it.  No tumor.  There is a little bit of what everyone thought of a big tumor, but mostly gone.  This was on September 10.

I thought we were going to lose her real soon.  We still can, at any time since she's an old lady at age of 12.  But this whole incident, the emotional roller coaster (lasting almost a whole month!!) had taught me to love her with all my heart (even more than before), and appreciate the little things (like her snoozing next to me while I type this).  I'm just glad that I chose to "wake her up" after MRI, even though it was my selfishness which wanted to have a chance to say goodbye to her.

The whole time we were going through, we knew it would have been "the" time to let her go if she stopped enjoying her food.  She never did.  She always got sparkles in her eyes at meal time and cookie time.  We knew she was still there.

I attached the BEFORE and AFTER picture.  She looks funny with shaved head, but I rather have that than not have her at all!  Now, we are just enjoying Dee Dee's smile and waggling butt again, hoping that this will last for a while longer.  :)

UPDATE:  She now has her own hat so she can play in the sun! 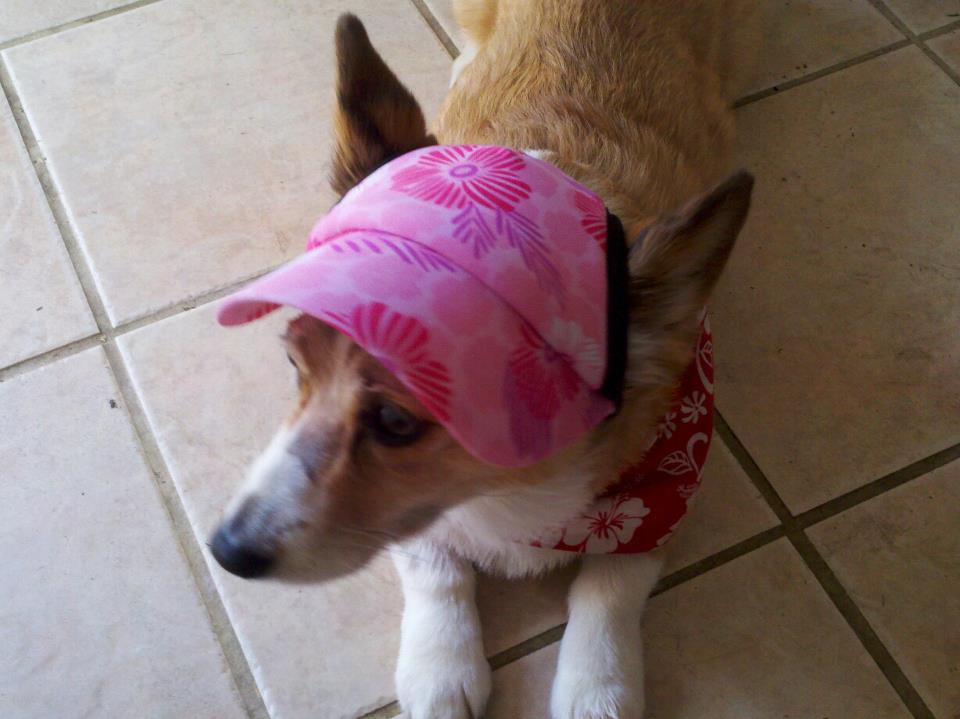 Wow!  What a story!  I am so relieved for you.  I know you will be watching her like a hawk from now on but what if you would have put her down at the emergency vets?!  What a blessing for you all to have more time together.

PS-You might want to keep her shaven picture for the next corgi look-alike contest.  Might I suggest Sinead O'Connor or Dr. Xavier?  :)

What wonderful news!!! DEE DEE is beautiful even with a shaved head . im so happy for you!

question is did she get the hemorrhage at the kennel?

The vet said we will probably never know.  Yes, it could be that she hit her head inside the cage she was in, or bumped into something.  But she's been staying there for over 6 years, and we never had issues with them.  The vet also said it could be virus, or just simply her age.  It could have been building up, and just so happens that symptom started right when we were picking her up.  They said that with neurological issues, dog can be fine one minute, and totally out of it the next.  So we might never find out what happened, but I'm planning on taking her to the vet to have her blood pressure checked soon.

Permalink Reply by Maddy & Keke on September 18, 2012 at 8:22am
She look so beautiful with a shaved head. I was bracing myself not to cry until the " no brain tumor" part. So happy she is ok now.

I read on and on just hoping it was a happy ending! I'm so glad you will get some more time with your girl. She looks adorable with the shaved head. She looks smiley in the pictures.