How to make plastic claw caps for dogs

How to make plastic caps for dog claws.

Dogs sometimes form a habit of letting their claws scrape the ground as they swing their foot forwards.  If they walk much on pavement, this can wear the claws down on the top side.  Al does this with one front paw, only enough so I never have to trim the center claws.  Gwynnie has DM, and she is dragging her rear feet and wearing down the top sides of the two center claws all the way to the quick, and they actually bleed. This is a method for making plastic caps for the claws, similar to "Soft Claws".  It's like the way dentists make molds of a tooth for a crown or model.

This requires a calm dog accustomed to having its paws handled.

Note: the outside claws in the photos have just been clipped; they do not show normal wear. 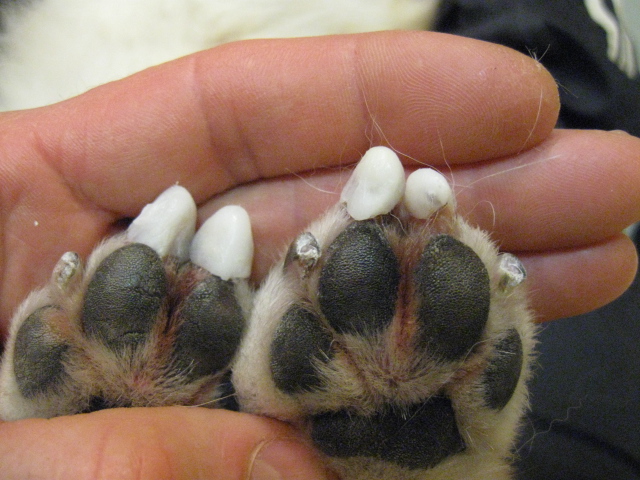 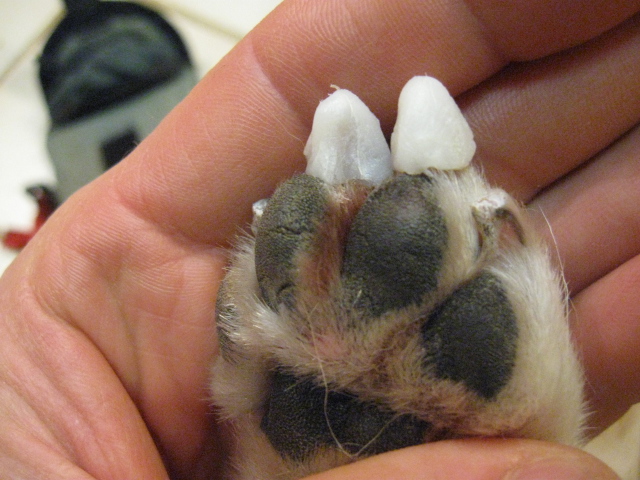 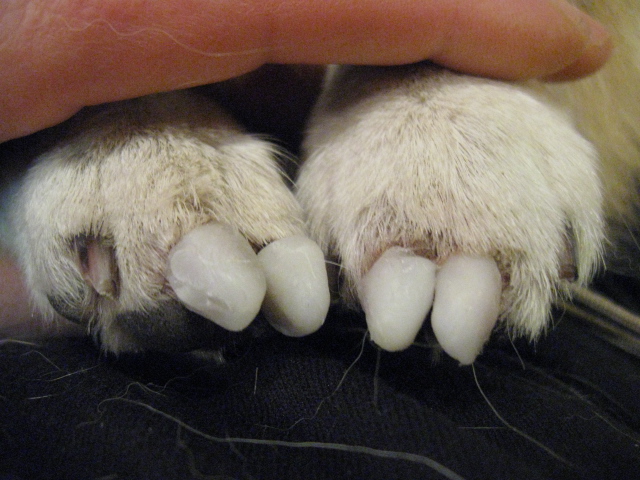 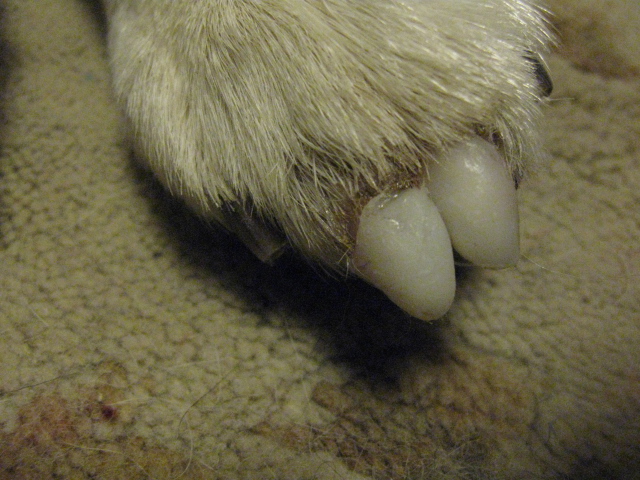 Denture adhesive, a hard waxy plastic that becomes soft and pliable in hot water.  Hospitals make custom-molded splints out of this stuff; I had one left over from my broken finger. [Anybody know where else one can buy this extremely handy stuff?]  It's almost like hard, tough paraffin that you place in hot (nearly boiling) water until it melts, softens, and turns clear.  Use a ceramic cup and metal spoon; the softened plastic will stick to plastic bowls or spoons.  I got the idea from my hollow Halloween costume vampire fangs:  you fill them with the softened plastic, push them onto your teeth to form a close-fitting mold, let it cool for no more than a minute, then remove it.  It’s like the way dentists make molds of teeth for crowns and models. 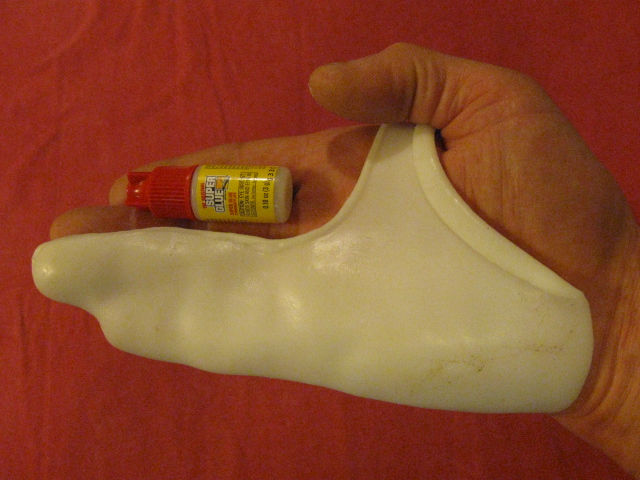 Super glue.  Note:  although super glue was originally invented as a tissue adhesive to replace sutures, do not use it to close wounds!  It’s too inflammatory.  Newer formulations such as Vet-Bond® are better for that.  I used ordinary Super Glue because open wounds were not involved; just claw-to-plastic.  Choose the the quick-setting kind; I used the thin, runny kind, but the thicker, space-filling kind might be better; less drippy.  You must be meticulous about not spilling this stuff in bad places; it bonds skin instantly and if, say, you accidentally glue two toes together, that will be an embarrassed dog.

Maybe heavier cutting tools like very small wire cutters or surgical scissors, or good nail clippers, for trimming any sharp edges (not a problem for me).  Maybe an emery board, nail file, or small file.

Sharpie marking pen to mark the cap and the claw for proper alignment during assembly.

An assistant – some of this is a three-hand job.

First, practice with a pencil:  press a bead of softened plastic onto the tip.  Let cool.  Mark the orientation with  Sharpie pen.  Remove the mold.  Practice not letting go of it until you're done.  Put a couple drops of super-glue into the mold, then carefully cap the pencil tightly with the mold, spilling no glue. 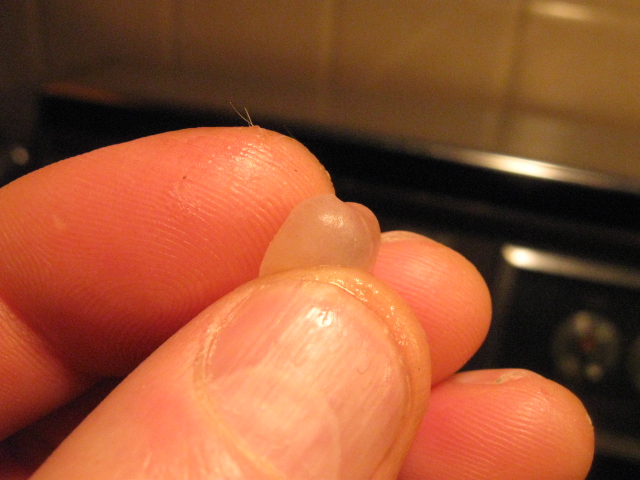 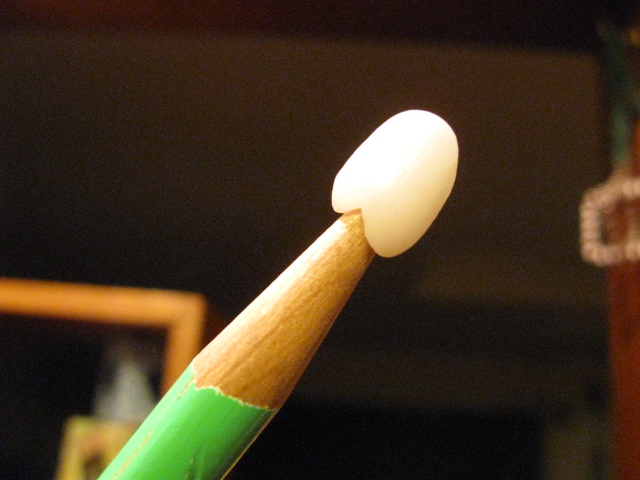 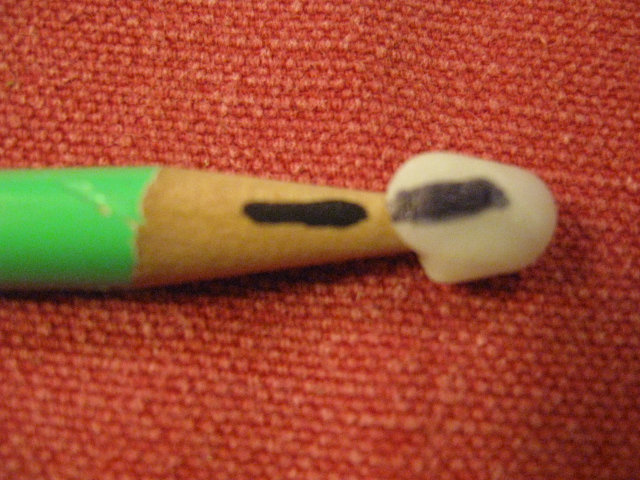 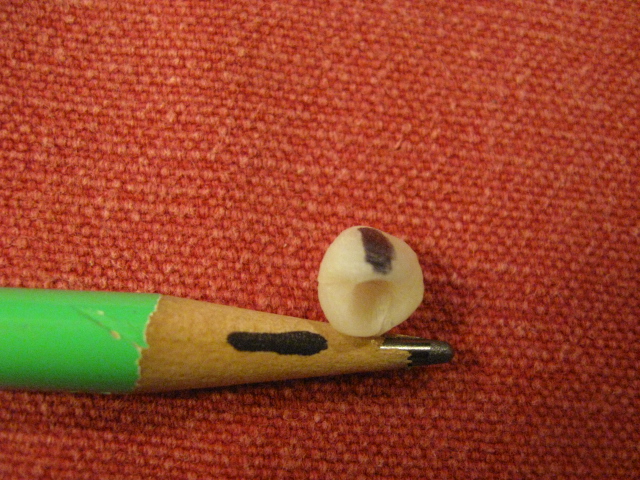 Trim all fur away from the claws, clean them, and make the mold.  Mark the top side of the mold with the Sharpie pen (otherwise it's very easy to forget which side is which).

I made my molds using pea-sized globs of  the waxy plastic, cooled enough not to burn, then pressed over the claw.  Hold until cool and hard.  Important:  ensure that they are not too wide, interfering with the adjacent toe or the foot pad, or big enough to be clumsy.  Avoid sharp edges.  Now, holding the paw in one hand, pull off the cap but don’t let go of either the claw or the cap, or change your grip on the cap.  Hold it mold-side-up as your assistant puts a drop or two of glue into the mold (maybe apply some glue directly to the claw?).  Recap the claw and hold until the glue sets.

Watch the dog closely to see if this interferes with gait, negotiating stairs, etc.  They may take some getting used to.  Gwynnie didn't even seem to notice on the first day.

So far, I have no experience removing these things if they turn out to be a problem.   There might be unforeseen problems.  The plastic is not terribly hard, so one might nibble it to death with a nail clipper or something like that.  I am expecting them to eventually fall off from normal wear-and-tear.  I advise doing only one first to see if it bothers the dog and the dog tries to chew it or something.

My invention has been a bit disappointing.

The plastic seems hard, but wears quickly on pavement.

So I added a second layer, making rather large bulbs of plastic, and I think they were too awkward.  If you try this, do not make the caps any larger than those pictured here, and be very careful not to spill any glue on the fur or toes -- the thicker types of glue might be better.  I got glue in some of the hair, matting it, and that seemed irritating.

Gwynnie developed a lot of irritation near them on her toes -- she was worrying them, chewing with her teeth, and I'd spilled some glue into the fur, making a mess.  I just removed everything, and it took some doing with good cutting tools.

This method might be workable, but will require practice and skill.  Thicker quick-setting glue might help; harder to spill on skin or fur.  Perhaps Vet-Bond(TM) would be better (supposed to be less irritating).  The caps should be kept small, and no longer than the claw itself.

The problem remains that if the dog starts chewing or worrying them, they are not easy to remove.

When at first you don't succeed, fail, fail again.

LOL! It was a great idea, though! Sorry to hear it didn't work as well as expected.

You would think there would be something on the market that might be easier to work with.  There is something called  Dr. Buzby's Toe-Grips that are used for helping older dogs maintain traction/footing on slick surfaces.  I wonder if these would work to help with the nail wearing issue.

Seems to be working well.