It's almost 5 years later and I thought I'd add an update to this post with what has been working for me and Mishka since the last time I posted.....

Someone on the Corgi-L mailing list asked for recommendations for knuckle-dragging, so I threw together a Google site with some Youtube videos showing how I trim/make and apply nail caps and knuckle spats for Mishka:

After talking to my regular vet, I took Mishka to see an orthopedist.  She checked him over very thoroughly and basically said that all his bones and joints look about as good as they can for a Corgi (she happens to have a Bassett Hound herself, so she's familiar with dwarf dogs).  Not responding to the pulling or prodding in any way that would indicate a soft tissue problem either.  So, like many Corgis who drag their nails, that's just the way he walks, and he happens to do it enough to scrape that knuckle as well as the nails.

She talked to her physical therapist to see if there were any non-surgery rehab things we could try, and the PT (as it turns out) had just had another Corgi in with the same odd dragging issue.  Said there are exercises that can help train a dog to pick their feet up a bit better and for longer walks, a custom shoe to prevent the knuckling action.

Just went to see the PT for the boot fitting - should get the boot in the next week or so.  We'll go in to pick up the boot and to go over the exercise regimen, which we'll need a longer appt for.

So, hopeful that there can be some improvement with the exercises, hopeful that a custom boot won't rub his toes bloody, and even if neither truly solves the problem, I feel a lot better having had an orthopedist and physical therapist examine Mishka and say there's nothing really out of place - and no reason not to keep doing agility (provided that I continue to be cautious about jump height, etc. the way one should with any Corgi).

I know a lot of corgis drag their front toenails - the various vets we've seen say it seems to be common.  What I haven't heard much about is knuckle-dragging.  I don't mean knuckling over in the back feet, an early symptom of DM - Mishka only does this on his front feet.  Well, one of his front feet. 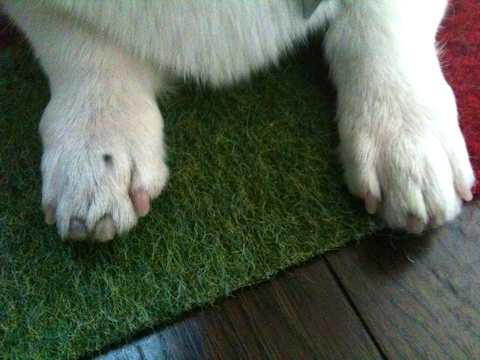 That little black spot is actually a patch of very short spiky white fur with city dust on it - the black washes off with shampoo to reveal normal skin underneath.  When I point the toes down, the patch is exactly over a knuckle.  He is too wide in the shoulders to conform for show, and he has a distinctive swagger movement, so I figure there is some correlation between the extra width and how his legs track under his body.   It is a constant spot, does not come and go, does not change, and to the best of my knowledge Mishka hasn't experienced any trauma to his front legs. 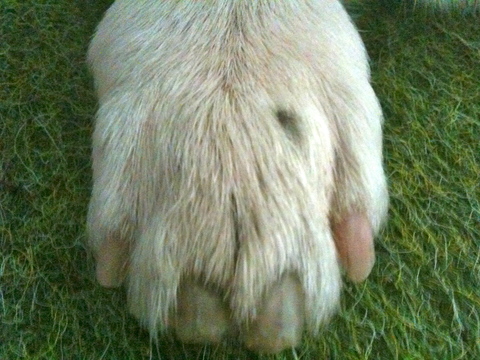 (FYI:  The oddly discolored center nails on both feet are actually nail caps - without them we can't go for walks because the nail dragging wears them down to bloody stumps.  The caps wear through in about a week so it doesn't interfere with regular weekly nail trimming - and you can see that his fur wears down on the tops of the nails from dragging.)

So....my question for you is - does anyone else have this happen with their dogs?  Is it just more dragging in the same way that his nails drag?  He doesn't seem to be in pain and he doesn't hesitate to play normally, but perhaps it does hurt and he's just used to it?

Since this spot is only showing up on one side, it worries me.  Is that leg unhappy?  Is he not picking the foot up as much as the other one?

What kind of veterinary specialist would I go to if I wanted to get this evaluated?  Orthopedist?  Chiropractor?

Hi Beca, It's quite common actually. If you insist on seeing a specialist, orthopaedic surgeon would be it.

Thanks Sam!  I might go to a specialist to see if they think there might be problems doing agility training with a dog who won't pick his feet up normally....

Permalink Reply by Keri&Merlin(Judy&Alan's Pups) on June 14, 2012 at 8:26pm
Both of Our female corgis over the years have had a shuffling noise on hardwood floors due to their front paws not being picked up high enough to miss the floor,but nothing that exaggerated.Don't know if it's a coincidence that both were female,none of the guys have done it.Besides the toenail covers,all else is ok?I'm with Sam.Not worry about it unless it becomes a real problem :).Aren't corgis unique crazy dogs!?

Mishka makes that shuffling noise, too, when he walks.  It would be cuter if it didn't mean a weekly nail-cap application or bloody nails.  Or if we lived somewhere with more dirt and fewer sidewalks.

He seems fine otherwise as far as movement goes - no limping that I can see.  I think he'd enjoy going for longer walks, but on longer ones the knuckle spot will sometimes bleed.  We don't have our own yard, so most exercise has to be walking on pavement.  Agility training has been nice, since the club has a rubber floor, which doesn't cause more wear on his nails.  On the other hand, I wouldn't want to continue training if the dragging indicated he wasn't sound enough in front to run around and jump that much.

It is probably normal but if I had to choose a specialist I'd probably opt for either an orthopedist or a neurologist. Generally for gait abnormalities like dragging feet or one or both legs etc neurologists are the way to go, but if its due to an orthopeic issue then that would be the way. Maybe your vet can advise if he/she thinks its orthopedic or neurologic? I'd probably go to a regular vet for an evaluation before a specialist so you know which direction to take it.

My guess is that this is a habit, and it's not going to change.

If Al drags a foot and he makes it up mountains with you, then I am probably fretting over nothing.   :)

I agree with talking to vet and taking him to a specialist. That's definately what I would do if it were my Chase.
I have never seen nail caps but it's good that they make them! Since he is dragging his knuckles maybe you should temporarily wrap his little foot/feet up until you have him evaluated. Maybe even just wrap them when you go on walks, when you think it would hurt the most.
My mom was born with a "deformed" foot. She is missing her toes on her left foot and because of this she had no support while walking. Since her toes were not there to support her while walking, a lifetime of walking on the padding of her feet has caused it to wear down to nothing. She is now walking on bones, which is extremely painful. It has also caused her nerves in her feet to suffer.
I would just be concerned that a lifetime of dragging his knuckles would have similar effects on Mishka. I would definately get a second opintion from an orthopedic specialist.

I was also thinking a bootie or something to give more protection on walks?

They do work for the knuckle, but use is hard to enforce with the husband.  :)  We have one normal pet owner in the house (him), and one crazy corgi owner (me).

There are also some drawbacks to boots - the dragging tends to wear holes in the toes very quickly, and the sturdier ones are stiff enough to rub the outer toes bald and bleeding after a while.  I also tried wrapping with bandages, but the dragging motion either tugs the bandage off or wears through it in less than a block.

If anyone is looking for warm-climate boots for a dog who doesn't drag his toenails, I'd recommend the Ruffwear boots - you may have to move the strap down 1/4" to get them to stay on, but they are incredibly well made.  Their dog jackets are also beautifully made (better construction than my own clothes - maybe they should be making human clothes?).

I would love it if someone started making chain maille or kevlar dog spats.

Perhaps I should start a "grass" command, to get him to walk as much as possible on the grass and dirt strips.

Yah - that's the sort of long-term damage I worry about.  If we lived somewhere less urban I think I'd be less concerned.  Perhaps I wouldn't even notice.  And really, dog feet are quite tough, but not exactly made for pounding cement.

The nail caps are a really good solution for dragging that only affects toenails.  I trim off the tips so they don't stick out further than his nails and make him trip.  The manufacturer instructions say they should stay on for 4-6 weeks, which probably works for most dogs, but corgi nails grow like weeds.  Which ends up being moot, because the dragging wears through the cap on top in about a week, so I have to replace them on nail-trimming day anyway.  A pack of 40 caps lasts 10 weeks (4 nails need protection), application is once a week, and the rest of the week he can go out for walks without marital arguments.  :)