While very possible a similar thread was started before I joined this site, I find it interesting I haven't seen much discussion on the world's most famous corgi owner, Queen Elizabeth! I came across this article on dailymail.co.uk about her proud canines:

The Queen has decided to stop breeding her famous corgis.

Her Majesty has become synonymous with the breed since she was given a bitch called Susan on her 18th birthday in 1944.

But she was so devastated by the recent deaths of two of her pets, she has decided not to get any more. All smiles: The Queen is greeted by local corgi enthusiasts in May 2005 during a state visit to Canada

The Queen now has just seven corgis left - and likes to exercise them herself when possible.

A senior royal courtier told The Sun last night: 'It’s hard to imagine her walking around Buckingham Palace or Windsor Castle without them around her feet.

'But it’s a sign she realises she is getting older and can’t look after such a large pack.

'By the time her younger dogs reach old age she will be about 90 and so it makes sense not to replace any that die.'

The Queen had five corgis and four 'dorgis' — corgi-dachshund crosses. The seven-strong pack will now be left to decrease naturally.

She was 'deeply upset' earlier in the year when two other favourites died from cancer.

Royal expert and author Phil Dampier said: 'The dogs have been a massive part of her life and she is devoted to them.

'The Queen feeds them from the table with titbits and even mixes up some cooked meats, biscuits and gravy every tea-time, which she puts in silver bowls.

'It will be hard for her not to breed any more of them but she’s made a decision for sensible reasons.' Old friends: The Queen with one of her corgis at Sandringham in 1982

The Queen's love for her corgis is well-known and they are often seen milling around at the feet of visitors to Buckingham Palace.

The corgis have hit the headlines before - in 2004 one had to be put down after being savaged by an English bull terrier owned by Princess Anne when they ran out to greet her as she arrived at Sandringham for Christmas.

Anne was convicted under the Dangerous Dogs Act the year before that after the same dog attacked two children, becoming the first member of the Royal Family ever to acquire a criminal record after admitting letting the dog run out of control. Tradition: The original royal corgi Susan was bought by the Queen's father, George VI, when Duke of York, in 1933

The corgis have enjoyed life as Britain's most privileged pets. They live in palaces and castles, travel in chauffeur-driven limousines, fly by private plane or helicopter and are carried down aircraft steps by aides.

They live in a boxroom that holds their wicker baskets, raised a few inches off the floor to avoid draughts. It is situated in the royal apartments, around which the dogs wander at will.

In the past, each corgi bitch was allowed one litter - the Queen prefers dogs with a reddish tint. The puppies were never sold, but those that were not kept were given to good homes."

Since most members on here are from the states, is it just me or do the British corgis vary slightly in appearance from our guys? In the first pic, it seems like the ears are slightly further apart, and in the pic from 1982 with the one corgi, the dog's front legs look different. Maybe I'm just nitpicking or maybe its just a unique trait amongst some of hers but I would be interested for your guys's input.

Hi Kelsey, the first pic above was actually shot in the 90s in Canada, I forgot the owner's name :) If you look at pictures of corgi 50 years ago, they are quite different. Check out the following pics of QE2 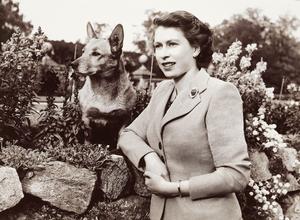 Permalink Reply by Bartleby on July 24, 2011 at 5:19am
Nice vintage pics! I'd seen the 2nd from the bottom photo before but not the others. I cant tell if its cuz its in black or white, but it looks like there are fewer white patches of fur. The first pic is quite adorable.

Permalink Reply by Ludi on July 24, 2011 at 9:02am
Thanks for posting this! I'd always wondered what the lives of these royal corgis were like!

As Sam said corgis in the past were quite different looking than today's. Her dogs may not be excellent examples of the breed either necessarily. I'm not sure if her dogs were ever shown?

Here's another link for old corgis:

Permalink Reply by Bartleby on July 25, 2011 at 6:27pm
Interesting how some of the old corgis look like they could have been plucked from modern day and a few of them would be very much considered corgi mixes (by their looks)

I am shocked, shocked!  Princess Anne was one o' them crazy pit bull owners?!

And somewhere, I've seen a collection of British tabloid gossip about the royal corgis, including something about a footman getting into trouble for feeding the corgis gin at Christmastime?  I should hope so.  Even Gwynnie (a commoner, although she insists she was dognapped from Buckingham palace as a puppy, and expects to be treated accordingly) gets nothing less than the Glenlivet at Christmastime.

"...Britain's most privileged pets. They live in palaces and castles, travel in chauffeur-driven limousines, fly by private plane or helicopter and are carried down aircraft steps by aides..."  So what's so special?  Sounds like the life Gwynnie & Al live, except for the plane & helicopter.  And the castle is, well, yeah, a bit small.