When to let your corgi free?

Hi all... I wanted to know when was the first time you let your corgi free, off the leash? I want to take him places like the beach and play ball at the park without fear of him running away. We are also looking to go to the lake this summer and I want to give him more freedom to run and swim ect...

After you know 100 percent your pup will come back when called, which means lots of recall training.  I would practice with him having a very long leash on him for training purposes.  I am sure others will have other advice for you as well, but I thought I would give my thoughts for now.

Thank you, right now it's hit or miss. He is 4 mos old and comes to me when I call him in from the yard. He doesn't listen much yet when we go on walks because everything is so new.

Call him to you regularly just to give several (think 10) tiny yummy treats and then release him to do whatever he was doing.  You want him to think "come means I run to my people to get food and then have fun again" and not to mean "game's over."

I still don't after 6 years. She's escaped a few times, and she will run off a bit to taunt those who call her back (except me) until they offer her a cookie. Doesn't sound so dangerous until you add in the fact that there are streets with cars around the house. We have a fenced yard, many fenced dog parks here, some with beaches. So the need to let the dogs run other places isn't as big a deal. It's also illegal to allow dogs to run loose in a non-dog park here, and I, myself, get really annoyed at finding dog poop in the parks.

I come from a hound background. Hounds ALWAYS must be contained. My husband would walk to the mailbox with my beagle in the mornings, until a coyote wandered by. Yes, a beagle is too big for a coyote to just snatch and run off with, but this beagle chased the coyote. It didn't end well, he survived, but he never went to the mailbox again.

If you do let your pup run at "the lake" (wish I had a lake!), make sure he has ID tags for not only home but your vacation address. And a microchip registered with a phone number that will reach you where you are, and an emergency contact (besides you.)

Work on your really Reliable Recall (see posts here, or google it)(Leslie Nelson?) in a large but enclosed area where it's safe to release him.  Then do refresher training often.  Find an odor-proof screw-cap plastic container (a prescription can might work) for carrying tiny training treats.  I use bacon for the RRR training.  They think their "magic word" means "bacon".

Oh, using a screw-cap container is a great idea... Since I use extra special/smelly treats for reliable recall that's one of the things that's always a pain.

My family has always raised our dogs off leash. Leashes were something we trained with or used in public but they were always trained from a VERY young age that when I call you come. I start with just having them drag a leash around so if I call and they aren't coming I can grab the leash and give it a gentle tug then a yummy treat when they come. I think the biggest problem people have with off leash training is that they wait too long so when the dog is FINALLY let off leash it is SOOOOOOOOOO exciting that they just can't focus. When a dog is trained from the get go to be off leash it is nothing new or exciting and I feel they respond much better. We also work on focus training from a young age and of course a good recall. I would say by 6 months old Franklin's recall was close to 100%.

Here is Franklin at 4 months old at the beach in San Francisco: 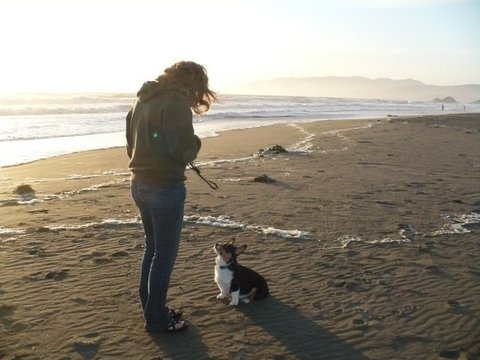 this is awesome. way to go Franklin!

Permalink Reply by Beth on February 19, 2013 at 12:17pm
The best answer is when the area is safe (because no dog's recall is 100%) and when the recall is just about fool-proof. Here's a great blog post from a really good behaviorist about it:

However, my answer will also be "it depends." The reason I say this is that younger pups get VERY scared (most of them) if they lose you; older dogs typically don't. So some carefully planned off-leash excursions with pups in safe areas (where they won't be in likely danger if you lose them briefly) can instill in them a much stronger desire to keep an eye on you than positive training alone ever can, IMO.

When Jack was a pup (not sure how old but the weather was mild so he must have been somewhere under 8 months old) I let him loose to play in the park with a beagle we knew. It was very early on a weekend morning, no one was around, the nearest traffic was a couple blocks away.

Well, the beagle ran off and Jack followed. I turned to the owner and said "does she (the beagle) usually come back?" He said yes, after a half hour or so.

"Great" I thought. "Now I have to track down my puppy." Well, just as I was about to trudge off, here comes an obviously distressed Jack (without the beagle) flying back down the hill, so fast he practically ran into me.

Since then, he always keeps us in sight which is handy when hiking in the woods. Keep in mind a dog keeping you in sight is NOT the same as a dog who will reliably returned, nor the same as a dog smart enough to stay out of danger. But it's a useful behavior to have. It's easy enough to "hide" on a puppy and make them THINK they lost you, harder with an older dog.

My Maddie came to us as an adult and I don't know how many hiking excursions she may have had but she does not seem to have similar fears of losing us and will occasionally bound out of sight after a chipmunk or something.

So if you are in really safe place where pup wandering 50 yards away won't put him at risk, some very careful off-leash excursions can help make him more reliable later on, when he's older and more inclined to wander.

Permalink Reply by Ivy on February 20, 2013 at 1:55am
Heh. This is so true! I took Ein on a hike when she was young and while my attention was distracted she ran off down the trail and out of sight. I thought great, our first time out and I lost my pup! She came barrelling back down the trail running full speed. Now she keeps me in sight which is a great trait. Even if she does give annoyed sighs when I hike to slow.

Permalink Reply by Beth on February 19, 2013 at 12:19pm
I should have added that Jack was distressed in my story above because he got some way away and went "Ohmygodwhereismymother?????" and came looking for me. An older dog might not be so alarmed, and those early fears really imprint strongly on a dog.

I too trained Luffy in a large contained field to see how he would do with recall and staying by me. When I first let him loose he was frapping and running around like crazy until I decided to see what his reaction would be if I just started walking away and sure enough he noticed and came zooming right to my side. I noticed he would always stay within a certain distance of me and would constantly be checking back at me to see where I was.   After this I started practicing his recall and also trained his emergency recall (secret word dingle berry,lol). Once I felt more comfortable with how he preformed off leash in a large field I decided to test it out on long hiking trails and at the dog beach near my house which he did fantastic. I normally just have to start walking away and not even have to say anything and he will be running to be by my side. Even with how confident I feel with Luffy being off the leash I would never have him off leash in public areas where there are cars and other hazards because all it would take is that one time and it just isn't worth it.