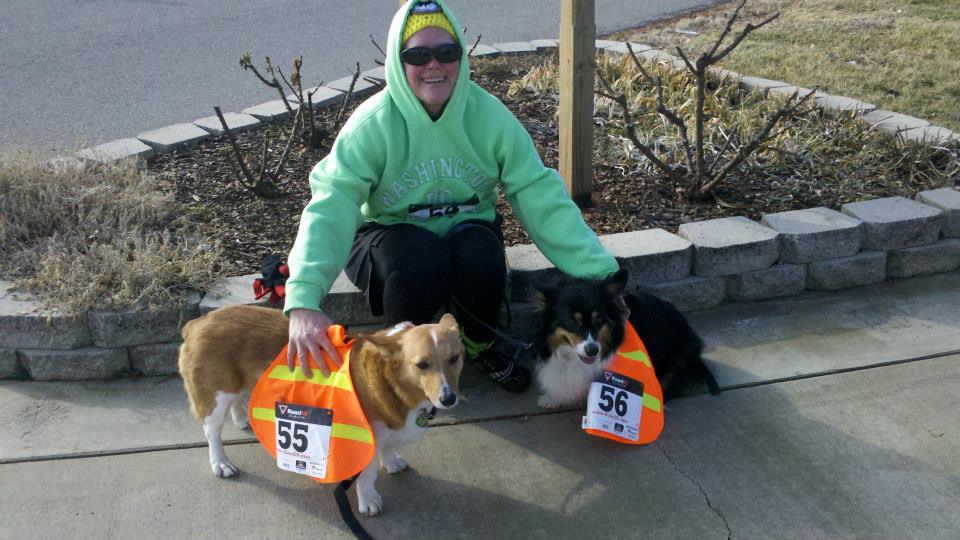 Running with your corgi

So, I have taken to jogging, and I actually can do 3 miles, so yay for me.  I have also been taking Team Corgi with me, Lilly and Ein.  I take them about 3 times a week, but want to take them more.  I don't push when we go, and we stop to potty about 4 or 5 times.  I would like to take them every time I go, but I don't want to push them.  Anyone else run with their Corgi?

Today is Lilly's 3rd Birthday!  I cant believe time has gone by so fast!!

She is such an Awesome girl!!!

Bark in the Park

So on Saturday we went to the Bark in the Park and Lilly and Her family, and Ein entered the costume contest.  We got a second place!!!  We had them as cowboys, cowgirls and even had a couple of cows!  Took photos and got alot of comments on the pack of Corgis...we had 6 there!  The min pins were the cows...and they did a great job.  The only bought costumes were the cows....we made everything else!  We had such a good time!

So tomorrow my daughter and I are flying to Oklahoma for my sons graduation.  He is graduating from UPTP....(undergrad. pilot training program) He is in the Air Force..so I am super excited.  My only problem is Lilly.....I have my daughters boyfriend staying here with the dogs.  And of course we are expecting a triple digit heat wave here...And to top things off I have never spent the night away from her.  I know she is going to be fine, but I dont have any idea of what to expect when we get…

I would like to wish all the Corgi Mamas out there a Happy Mothers Day!!

Happy 2nd Birthday Lilly!!!  I cant believe it has been 2 years already!!

Do the Corgis Know?

So, ever since I brought Lilly home, she and my daughters Corgi Ein, have growled and jumped at my cat DeeDee.  Well, I woke this morning and DeeDee had passed away.  She wasnt sick, never displayed any strange behavior.  So my daughter and I are just wondering if maybe the Corgi's knew something was wrong with her.  It is a sad day, but the bunny butts are doing everything they can too cheer me up, and she went very peacefully, and quickly.

Well, its Wednesday already and the Foster Babies head back to the Rescue on Friday and then off to their forever homes.  I am hoping that the Mama will have a forever home as well.  The "kids" of course are into a routine, and they are just adorable.  Although my Lilly does not like the Mama dog.  It isnt over the puppies, it is over me.  So after 2 dog bites (broke the skin both times) and keeping everyone separated, and happy....I have to say it isnt gonna be as sad as I thought to take…

Holy cow!  I am gonna be a corgi foster mom!  Little did I know that my first foster was gonna be a mama and her 5 puppies!!!!  I'm pretty excited!  They arrive on Saturday and I am hoping the meeting between them and the permanent house mates goes well!  Middle Tennessee Corgi Rescue are doing the adoptions so if anyone is looking...get a hold of them!  I am pretty sure these babies are gonna be adopted pretty quickly.  With my daughters help I should be able to post photos.

Okay everyone, I am going on vacation at the end of June, we are staying in Kimberling City MO which is about 15 minutes away from Branson.  Of course we are taking the corgis!! I was just wondering if anyone had any dog friendly activities there?  We are staying next to Table Rock Lake, so I need to get a couple of life preservers.

Any suggestions will be appreciated!!!

So Lilly got spayed on Monday.  I use a vet that actually comes to the house in this mobile home thing, and so she was able to recover here in the house.  She gulped water down that evening and of course vomited it all up. But then I watched her and called her away everytime she went for more than 3 laps. So by the time we went to bed, she was doing well. The next morning, I tried her with a handful of dry food.  After making sure is was going to stay down for 20 minutes I fed her a normal… Continue

First I want to thank everyone for their corgi prayers and advice! Vet visit went really well and he seems to think it is a reaction to her last round of vaccinations. But since her attitude and personality are completely normal he said there is nothing to worry about as the lump is not attached to the body wall. Once again, THANKS EVERYONE!!!!!!!

Ok, so last friday I was on the floor again playing with all the dogs...I usually lay on the floor and its a Corgi pile time! But anyhow I was petting Lilly and felt a lump under her skin. Its on her right side, bout 2 inches down from her spine on her ribs. I can move it around like a little marble, and it doesnt seem to hurt her. Ein, my daughters corgi, had a fatty tumor when he was a puppy, and I guess they are pretty common in puppies. I have a thursday appt with my vet just to make…

Okay, You can tell by the picture that Lilly is really fuzzy. Ever since she came home at 6 weeks, she is 4 and half months now, she sleeps on either the air conditioner vent, or an ice pack. At nite she goes in a little pop up kennel on my bed, on a ice pack. I have several foam flat bricks, I put them into a pillow case, and she loves to sleep on them. I have checked with my vet more than once, and she has room to move completely away from the ice pack so there is no risk of frost bite or… Continue