The eighth is really bittersweet for me now.

On one hand, I lost my bestest bud in the world a month ago today. On another, I have the most amazing short little four legged dog who I believe stepped into my life at just this time four months ago today to make sure that I still stuck around and saw reason for living, when I may have not thought so otherwise. I know I wouldn't have. 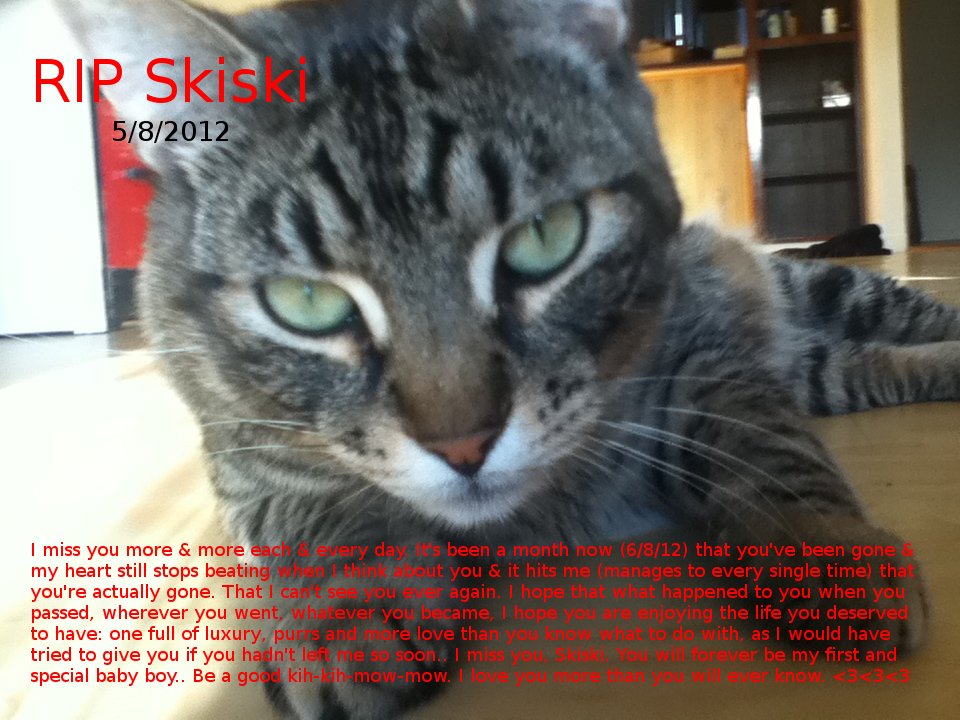 I still miss Skittles much more than I thought it was possible to miss someone. It's the hardest thing I've ever had to live through. I can be completely fine one moment and then the next it is like the pain is still just as new and intense as it was while I was watching him convulse on the vet's table as the euthanasia took place.

I've been having a lot of downs: I wound up crying in the middle of a restaurant when my grandma and mom brought him up, talking about how young he was, how he was such a good kitty and how sorry they were. I wound up crying in the middle of the street, patting Skiski's brother, who for a moment I let myself forget isn't Skiski. (They're almost 100% identical from the side) I've caught myself numerous times getting ready to throw whatever is breakable around me until it's all in pieces.

But I've been having some good times too: at about two in the morning on the fifteenth of last month, hubby and I went out for a walk. We hadn't been walking ten minutes when a tiny, petite little kitty ran straight up to us. She let us pet her and pet her before hubby picked her up and we took her with us to the park right accross the street. We sat down at a lunch table, she stayed on top, running back and forth between us for attention. We debated keeping her. We hadn't planned on a cat, we didn't have money for the cat.. But it was clear that she wasn't being taken care of anyway, so what if we gave her food and shelter? But then hubby got practical, and said we couldn't keep her-and of course we couldn't. We decided to leave. Since we could still see the spot that we had found her in, we were just going to leave her at the park to wonder back home by herself. She had other plans and followed us to another park, as we continued our previous scheduled walk. At that point, she wasn't wanting pets, she was just following us and wherever we stopped, she would stop in the same general location before pouncing around on bugs and grass moving in the wind. After that, we walked her back to where we found her, put her down and turned to walk back home-she followed yet again, and so we invited her in for the night. I put out some of Skiski's left over food and she ate and ate and ate and ate! She was about half Skiski's size and ate almost as much as he did. She also drank the water I put out like it was the best tasting liquid known to Earth! When my grandma showed up the next day, she was none too happy that I had a kitten. She wouldn't hold her, or even acknowledge her. (SO unlike my grandma.) Louki (a cross between my two favorite kitties' names Louie and Skiski, as she and they have/had the same markings and her coloring was a cross between the two also) even ran out of our apartment, went potty and came back. I was in love. We had to be out of our aparmtent that day so we spent all day packing. Almost exactly twenty-four hours after we got her, we hopped on our bikes for our last trip away from our apartment, Louki relaxing in my hand (I was holding her by her chest, with her body tucked under my arm) and we made if halfway to my grandma's, who was allowing me to stay with her, before she decided the bike was too much or something and decided that she wanted off and down. She ran after our bikes for a minute but then, even with coaxing, she eventually went her own way. I was heartbroken all over again, but of course it wouldn't have worked out for the best. I just hope that she is okay, wherever she is! After she was gone, I felt more at peace. I can't explain it, it's like it just gave me this feeling about Skiski, and I felt better about the whole thing than I have any other amount of time since Skiski's passing. (Even though it was heartbreaking in a way, it was exactly what I needed, if that makes sense.) 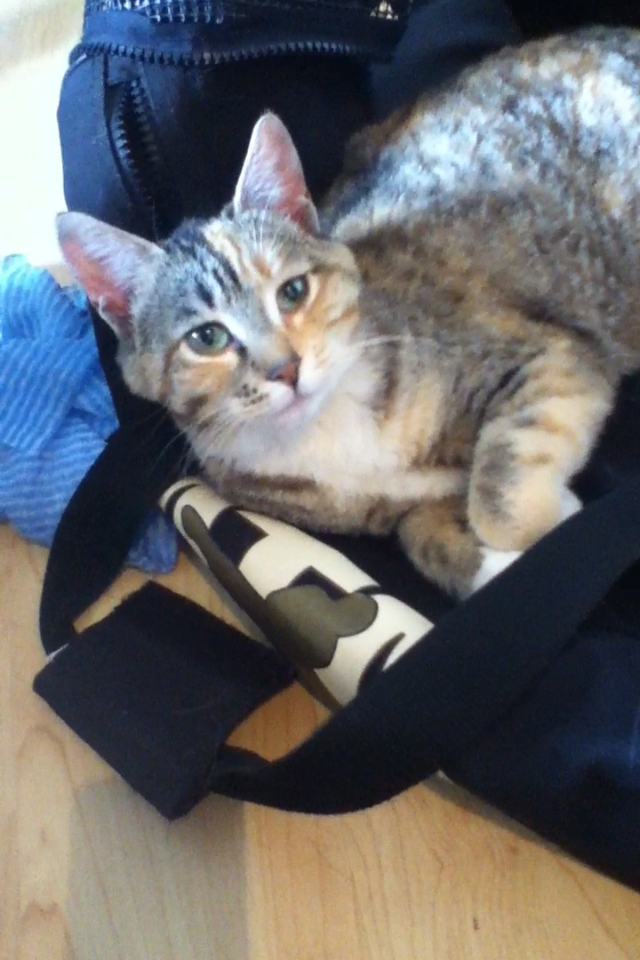 Louki Hanging out While I Attempted to Pack

Boy, oh boy, am I in debt! This past month, I was too down in the dumps to make Ziggy his monthly "Congratulations!" spaghetti, and this month is being skipped too.. He's gonna wind up getting a whole meal replaced with spaghetti instead of just getting it as an added, small treat! Poor pooch, I feel bad for letting him down but right now, things are just kinda crazy!

Ziggy has been getting more and more at home with us and is getting more and more affectionate towards me. It may not be such a huge deal to others, but I about jump outta my skin with happiness now because I can reach my hand towards his face, palm outstretched and upward, and he will plop his head into my hand and lay there. He has also taken to being a part time lap dog (my legs start to get tingly after a while lol) We even managed to get a picture of him curled up super small into a perfect ball! He's Firecorgi, the internet browser of real life!:P 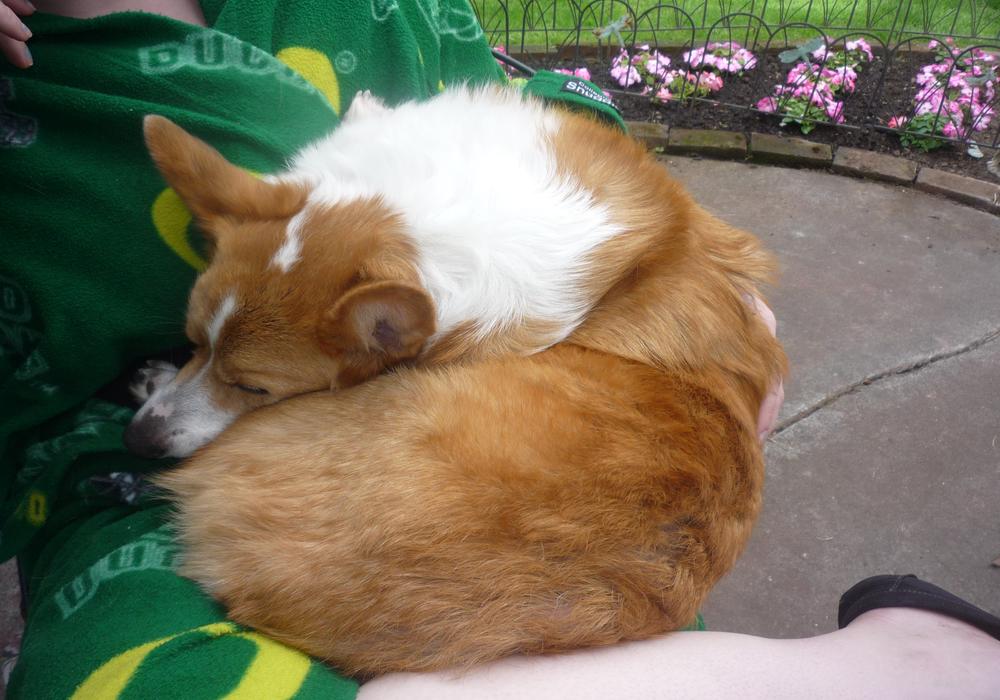 (Ignore the pale leg. I'm not good enough at photoshop to remove myself lol)

One thing that makes me happy because it shows he's attached to me, but also makes me sad because it's stressful to him and everyone who can hear him; he whines when I'm not with him. Even with other people, he whines. I spent the night away from him with hubby after we left our apartment and I guess the whole night Ziggy whined and cried and even howled some, though they tried to talk to and pet him to get him calmed down, but it didn't work. Any ideas on what to do about this?

I find it funny, Ziggy has started responding better to "Corgi" than to his name. I can sit there, "Ziggy.. .Ziggy! ZIGGY!!!!!" being said ever and over to get his attention, and he'll kinda just ignore me but then "Corgi" and his head whips around to stare at me. I think maybe he's mixing it up with hungry though, and he just isn't listening to me period! But it is only inside. Outside he is well behaved

Speaking of outside behavior, I am MORE THAN PROUD to announce that my problem walker is now an angel when we go out. I lost his harness and leash in the move, so we bought him a new cloth-type Walmart collar and my grandma had an extra leash, it is a very heavy chain that has a blue bloth loop at the end to hold onto, and I dunno if it's the fact that he's on a collar, or if the leash being so heavy and dangling down onto him makes him think that someone is trying to guide him and he's complying or what, but it is SO nice! I love taking walks with him now!

Such a good boy my Ziggy is <3 I love him so very, very much. I can't believe how lucky I was to be chosen to take him home-he'd gotten interest from like thirty other people, up to as much as a whole day before me, and I was still picked. Things are working out, and I'm gonna do my best to keep them working out.

Which brings me to the enormous thank you that I owe MyCorgi and everyone who helped me keep Ziggy, and everyone who kept Ziggy and I in their thoughts. It means the world to me that I get to have a fourth (and fifth, sixth, seventh, etc) month with him, especially when he is just now coming out of his shell. I feel like it would have done a lot of damage, as already so much had been done and I was heartbroken because he-or any other animal,-doesn't deserve that.

I also owe MyCorgi a thank you for more. I fell in love with Corgis through this website. Of course I liked them before I joined this site, but this just sealed the deal. Reading about them from a book that is impersonal, it just doesn't sell them as well as it should because these dogs are way more amazing than I first thought; which I learned from reading about your guys' dogs and the stories they've given you, and Ziggy was just what I needed (though I dunno if I'm what he needs lol!!) and without this site, I wouldn't have stayed so interested, and I would be in the worst emotional state possible right about now........ So thank you;)

So glad to hear from you, Kymii! And I'm so glad you are letting Ziggy help you through these tough times. We're all glad we could be here to help you when you needed it. Lots of hugs to you both!

Comment by Emily & Scout on June 8, 2012 at 11:28pm
This just made me smile! Skittles will always be missed but I love hearing about Ziggy and his progress. It is so awesome when you know the dog you rescued thinks of you as its mommy / daddy and everyone else is just extra. Give "Corgi" a big hug from me. (Scout answers to Corgi, too)

Hi Kymii, so sorry about Skittles :(

Great news that Ziggy is doing so good though! Best to you both!!

So sorry to hear about Skittles!  It can really take along time to get over the passing of a great and much loved friend!  But I am glad that Ziggy can help bring back the smiles and give some furry hugs!