Diggory is sleeping up against me as I type this... he's such a sweet little thing. I rescued him from the shelter on Saturday after Ginny and I had finished the Furry Scurry with the corgi team (our team raised over $1500 for the local shelter - woohoo!). 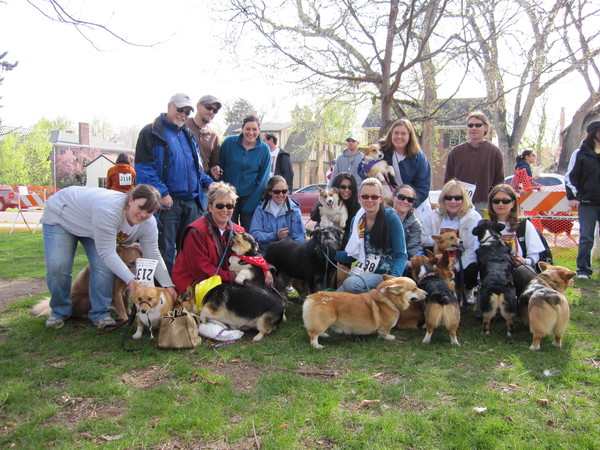 I've been thinking about getting a second the last few weeks and I knew I wanted a) a male corgi or corgi mix, b) a younger dog, but not necessarily a puppy, c) a dog that got along with Ginny and seemed inclined to want to play with her, d) was sweet and affectionate.

Lo and behold, we found Diggory. 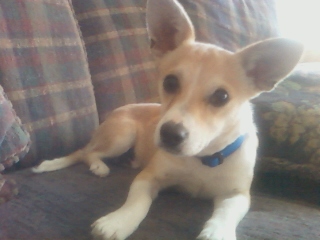 The shelter listed him as a corgi mix. What he's mixed with, we aren't totally sure, but my guess is Jack Russell terrier, because he's pretty bouncy and he looks like the cojacks I've seen posted elsewhere. Side by side, his face looks like Ginny's, just in a smaller proportion. He weighs in at about 11 pounds. He has the big ears and the same markings, but his bone structure is thinner and his legs are longer and he has a tail. A dog with a tail seems weird to me now! :)

He is just as sweet as could be, and while Ginny is fiercely guarding her most precious toys, she seems to have taken a liking to him. They play and wrestle and chase each other around. She sleeps next to his kennel to keep him company.

I named him Diggory after trying out several different Harry Potter-themed names and it seemed to be the one that fit him best. The shelter said they thought he was around 6 months old, but the vet thinks he's closer to 10 months. He is just a lovebug. That being said, he appears "mostly" housebroken, in that he knows going outside means he needs to go potty, but he has had several accidents in the house, so I have to keep an eye on him and leave him in the kennel during the day. Today he must have lifted his leg in the kennel, because I found pee OUTSIDE the kennel sprinkled about the carpet. Very stealthy, this one is. He is like a ninja pooper, too, because I don't even see him sneak off and then - whammo! - I find a big poo somewhere hidey when I go out to the kitchen.

He's been a real sweetie, and he's really adorable too!

Here he is with big sister, Ginny! 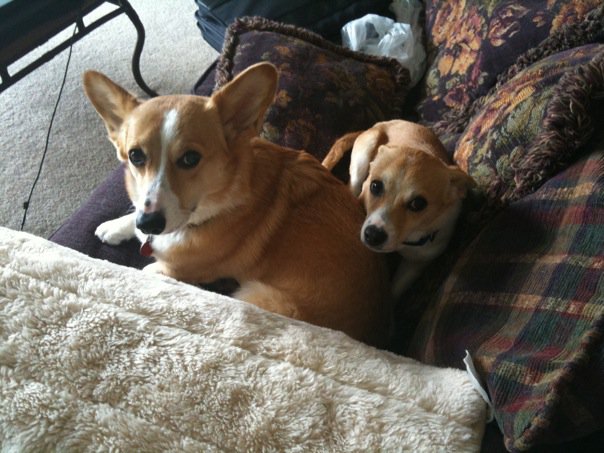 Comment by Avyon on May 5, 2010 at 10:39am
Aw they look like they're going to be great friends :) Congratz on your new bundle and its so great you adopted!

Comment by Joanna, Rainy and Calvin on May 5, 2010 at 9:28am
Diggory is a cutie-pa-tootie! May you all have many happy years together!!

Comment by Jane Christensen on May 5, 2010 at 7:49am
very handsome...looks like they already are best buds! Congrats!

Comment by Rebecca Marie O'Bryan on May 5, 2010 at 7:44am
very adorable! congrats on Diggory and rescuing a shelter dog:)

Comment by Mary and Rosie on May 5, 2010 at 1:00am
Congratulations on getting Diggory! He and Ginny are both very cute! :D