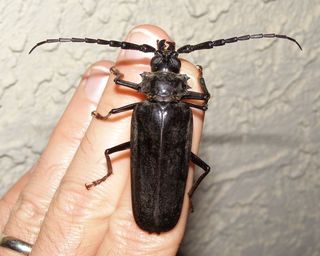 t's that time of year when maturing palo verde borers emerge from the ground. This particularly nasty critter lives underground for most of its two- to eight-year lifespan (estimates are all over the place), where it exists as a large grub with powerful jaws. In the Sonoran Desert, they eat the roots of palo verde trees; if they get into a city yard, they'll also feast on oranges, lemons, limes, and roses. An infestation such as the one in my Desert Museum palo verde will kill the tree within seven years.

When these little gems near the end of their lives, they dig out of the ground in the form you see above. This leaves a hole almost two inches wide and maybe 12 to 18 inches deep. They take flight, mate, and then the lady beetles come back to their exit holes, where they lay new eggs to continue the destruction of your landscape.

The palo verde borer is said to be next to indestructible. One arborist told me the only thing that will get rid of them is to cut down the dying tree, bring in a backhoe, and shovel out all the dirt down several feet deep, physically carrying out the grubs. Then, he said, he would treat the remaining soil with some verboten insecticide, and never again plant another paloverde, citrus, or rose in that area.

{sigh} So far, his dire prediction seems to be true. Last fall and spring, I laid down several applications of beneficial nematodes, little critters that quickly make their way into the ground and wreak havoc on a variety of root-eating borer grubs. Not known one way or the other whether nematodes affect paloverde borers, but some people say they've had luck with this earth-friendly treatment.

I, however, did not. This summer, another dozen of the monsters emerged from their lair. (A dozen exits indicates a heavy infestation: for every adult, hundreds of grubs remain underground.)

Ruby thinks these holes are THE best thing! They give her all sorts of doggy ideas, most notably "dig! dig!! DIG!!!!!!" So thrilled is she to see a handy little starter hole that she settles in to excavate a nice model open-pit copper mine in the (ridiculously expensive) xeriscapic landscaping.

Normally I just ignore this. Gerardo the Miraculous Yard Dude eventually will come around and fill them in.

But this year is different. This year I decided to escalate the Borer Wars. I poured THREE FULL BOTTLES of Bayer Tree & Shrub all around under the palo verde's canopy, and I intend to go out and buy some more.

Not known whether the stuff kills this particular species. It does the job on the type of borer that feeds on Texas ebony -- I did manage to save that tree, some years ago, using Bayer Tree and Shrub.

The palo verde borer lives deep underground, and that may be why most insecticides have no effect on them. In addition to spreading it according to the instructions, I poured the stuff directly down their holes, figuring this would carry it down to the level where they live and, with any luck, capillary action would spread it underground. The adjunct strategy, which isn't very good for the tree, is to run the sprinkler on the surface every day or two, again hoping to soak the bug killer far enough in to the dirt to reach the grubs.

Bayer Tree and Shrub is not especially good for dogs. Or you. Or me.

This is a trick: not only is she enchanted by the existing exit holes, apparently she can hear the beetles moving around underground, much as a coyote can hear small subterranean animals. Once she figured out what was making those holes and caught one of the damn things, she took to searching for them and trying to dig them up!!!

So now we have the borer holes and the Ruby holes...

This brings us to the pivotal question of this blog post: HOW DO YOU STOP A DOG FROM DIGGING?

It's surprising simple, if unaesthetic.

Take your pooper-scooper and collect some dog mounds, preferably fresh. Drop these in the bottom of the offending hole. Fill in the hole with dirt.

The dog will come back to dig some more...once.

Dogs do not like to encounter their own feces when they're digging, and most of them will be so abhorred they will not come back to that spot again.

Do this consistently, and it will go a long way toward breaking the excavation habit.

Glad the poop is working.  I have a favorite spot in the shade where I like to go for morning coffee also.  We wouldn't want to give it up.

@ Judith: It's quite a large area -- the tree is huge. Plus it shades my hands-down favorite place to sit in the yard. Even when temps are in the 100s, the side yard is cool enough in the morning to sit out there for breakfast and coffee. The dogs follow me everywhere, of course. If I tried to lock them inside the house while  I was loafing on the deck, I'd never live it down!

The scheme works. Ruby was re-digging every hole I filled in. Two days ago I buried Ruby & Cassie mounds in every hole out there...so far, not a single re-excavation.

I had never heard this...(the poop deterrent)  Good to know.  Nasty looking bugs.  Have you tried to put a physical barrier around the tree also?