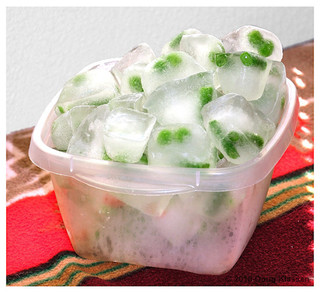 During the hot weather lots of folks will give their dog an ice cube to munch on. The dogs seem to enjoy crunching them and probably enjoy the cold on their mouths since dogs otherwise cannot sweat like we humans and worse, are trapped inside a permanent fur suit.

Poor Gromit, big hairy fellow that he is, is suffering through his first Arizona summer. It's now to the part of the summer where being outside, even at night, isn't much fun for man or beast. So Gromit's time is spent playing indoors with his wiener dog sister, Holly, and searching out the coolest spot in the house for his next nap.

I suggested to Debbie that she give the dogs an ice cube, that they'd likely enjoy them the way many dogs do. Being the creative sort Debbie decided to go to the next step and put a treat into each ice cube. So when she filled the tray with water she put a green pea or a bit of green bean in each little cube well.

When Gromit and Holly got these "ice cubes 2.0" for the first time they didn't notice at first that there was something different but when they broke the cubes down...Shazaam!! Crunchy on the outside and a tasty surprise on the inside! Ice cubes have become as popular as dog biscuits at our house and the ice cubes with the green centers are certainly better for them and less fattening than dog biscuits. 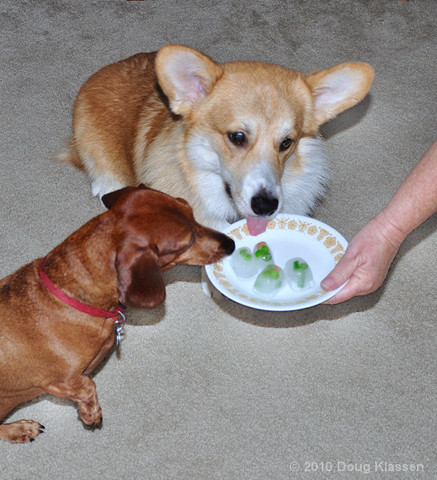 The problem now is that Gromit knows there is a goodie inside and will crack the cube, slurp up the surprise inside and leave the rest of the ice cube to melt on the floor. Sometimes Corgis are too smart for their own good.

Comment by Gromit, Sparkle, and Doug on August 14, 2010 at 8:52pm
The only problem we have is that the little brats figured out about the treat inside and now they just crack the ice, eat the treat, and leave the ice to melt on the floor, where I usually find it with my sock.

Comment by Lucy &amp; Ricky (Wendy/Jack ) on August 14, 2010 at 8:34pm
I'm impressed that Gromit and Holly share the plate of cubes so amicably. I don't think my two would behave so well.

Comment by Joanna, Rainy and Calvin on July 26, 2010 at 4:08pm
It's a great idea, adding a surprise to a classic favorite. Calvin loves to munch on ice. I wonder if I should freeze some fresh blueberries in there? Great picture of Gromit and Holly preparing to chow down. I can't imagine how hot it must get in AZ!!

Comment by Gromit, Sparkle, and Doug on July 26, 2010 at 2:37pm
Debbie has begun putting a bit of hot dog in some of the cubes. Not as low calorie as beans and peas but it adds to the culinary experience that is "Ice Cube Surprise." I love dogs, they are so easy to please!

Comment by Nicole, Stanley and STELLA! on July 26, 2010 at 9:09am
Nice idea! Stella's already crazy about ice cubes and I'm sure this will make her love them more. She also loves veggies, especially green beans!

Comment by Zach and Lisa on July 25, 2010 at 5:51pm
They do look very happy to get their summer time goodie. And they actually are kinda pretty, if I do say so myself. I hear carrots are a good healthy treat to freeze. It's like a frozen chewy snack.

Comment by Veronica, Alex & Conan on July 25, 2010 at 5:37pm
Ice cubes are Conan's favorite! He gets really excited when we ask him if he wants ice, and he'll do all his tricks for ice. We've even thought about taking ice chips to his training class and using them instead of the treats. I think I'll try the extra treats inside. Great idea!

Comment by Beth on July 25, 2010 at 5:16pm
I mash up some banana, add a container of plain lowfat yogurt and a couple tablespoons of peanut butter, and freeze the whole lot in ice cube trays. They love them and go wait by the freezer whenever we come in for a walk!

Comment by Teresa Gilpin on July 25, 2010 at 5:09pm
I love it when you give them ice and they leave just a little crumb of it to melt on the floor and then guess who gets to step in it? Its like a little surprise! (Love the picture, they look very happy to see the goodies).