Ginny is in her little puppy bed that she's too big for because she is completely jealous that her BRAND NEW BABY BROTHER was taking a liking to it. That's right, Ginny is a big sister now. We found a little corgi mix at the local shelter. He is about 6 months old and was transfered from another shelter in Kansas. We're trying to think of names for him, and I know this is lame-o, but we have a "theme" of Harry Potter names, so if you have any good ideas... so far I'm torn between Arthur, Cedric, Charlie, and Godric. He is mixed with something little - I think he might be a co-jack (corgi/jack russell), but he is a total love and very sweet. Ginny is tolerating him as best she can, as long as he doesn't look at: her bed, her water dish, her food, her bones, her toys, her mom, her butt, etc... but I think the relationship is off to a good start. He is trying desperately to get her love and approval and is pretty submissive to her, which is perfect. He is pretty well-mannered, walks well on a leash, and has so far been friendly with the people/children/dogs he has encountered.

Here is Ginny meeting her brother at the shelter for the first time. Ginny is on the right and the puppy is on the other side of the door. 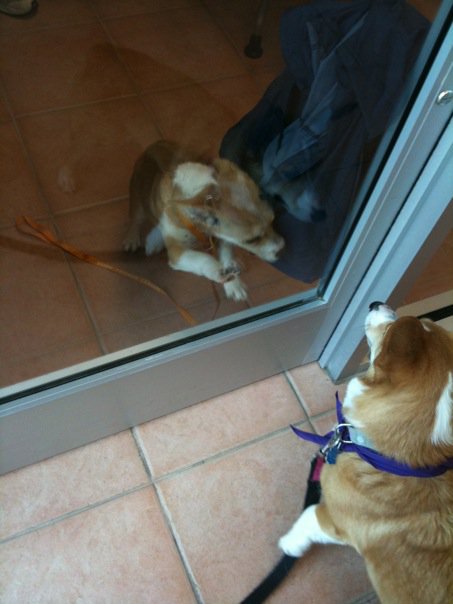 It was all fun and games, until we brought him home and now she realizes he is going to be sticking around.

Ginny will get over it... eventually.

Comment by Sammie Esposito on May 2, 2010 at 11:12am
Dobby would be such a cute name. And it looks like he has the big ears to take that position!

Comment by Ginny and Diggory on May 2, 2010 at 8:30am
They're doing well this morning and have been playing tug of war. Ginny loves that game and often plays it with me, but she doesn't seem to be able to find other dogs who will tug with her. My dad's dog won't even try. This little guy is game, though. They actually seem to be having fun together for the moment (when Ginny is in between being bitter and snarly). I do like Neville too! That could be a great name. My little mudblood.... And if Ginny ends of liking him, does that make her a blood traitor? Narcissa will certainly burn her name from the family tree for this infraction!

Comment by Jane Christensen on May 2, 2010 at 8:19am
So cute! Glad you could help out a corgi in need! Yes, Ginny will get over it and then they'll start playing!

Comment by Elizabeth, Hermione and Luna on May 1, 2010 at 11:48pm
Ok, sorry, we're having a good time discussing this. The daughter now thinks that Ginny should call him "he who must not be named!"

Comment by Elizabeth, Hermione and Luna on May 1, 2010 at 11:45pm
My daughter says "are they litter mates? then Ron." she thinks Harry (because then they'll love each other). The husband is in favor of Krum.
Also, daughter recommends Neville, since he is sweet.

The husband is proud of your for taking in a Mudblood!

(from the Harry Potter household of Elizabeth, Dale, Kira and corgi sisters: Hermione and Luna.)