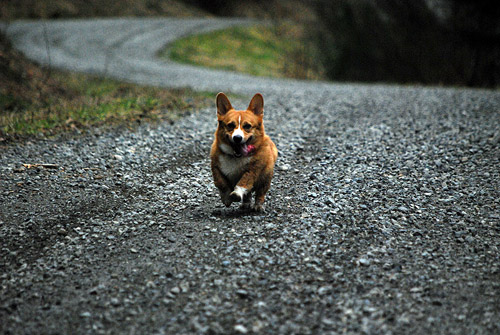 Two weeks before Christmas, she was diagnosed with lymphoma. And it was a hard hitting one - one day she was normal, the next day she wasn't eating, the third day when my mobile vet came out to look at her, her throat and every other lymph node were completely swollen. We all knew that this was not going to be something that even chemo could help once we took ultrasounds and x-rays; it had spread to her liver and was all throughout her system... so we chose to go with pallative care, and well, give her whatever she wanted food wise. ;) That was okay by her -- Piper never passed up anything to do with food. Preferably people food.

Simon and Caleb woke me Valentine's day morning to tell me that Piper passed away in her sleep. She was all curled up in her bed.

Pretty much two months to the day since the diagnosis, and considering they expected her not to make it till Christmas... I'm thinking we did okay.

I knew it was coming. In fact, I think we'd pretty much thought that we might be making the decision that Thursday. In her own way, she beat me to it - that's the sort of nice, honest little dog she was. No fuss, just happy to bop around with the people and sit in your lap and kiss you, never a bother - never bad.

It was tough to get up that morning and see her like that, but at least I knew that she was safe and warm and loved and she'd had cheesesticks and pie with whipped cream for dinner that night. She never quit eating, and that makes me chuckle. Such a Corgi, to the end.

We miss her a lot, the house is really, really quiet. All the boys are starting to settle - we had a couple of tough moments as they're restructuring themselves and learning to do without her bossy little ways.

What's so odd is that we rescued her on our anniversary, all that time ago. We gave up going out to the falls  to go pick her up, and she was supposed to be a Cardigan corgi, and a boy. We got there, and there she was and a girl Pembroke, and well, there was no  way we could leave her behind, she was simply that charming and fun, even though she'd had a rough beginning in life.

And she passed on Valentine's day. We decided it was a fitting way for her to leave. Came with love and left with love, we think. She was an awesome little dog, and the reason that I now have Corgis in my life, and I can never thank her enough for everything she taught me, and all the people she met and licked and who now love Corgis because of her.

What a beautiful photo and what an amazing tribute, for a beautiful amazing corgi. I am so sorry for your loss.

My 17 year old cat, Hamilton, passed away peacefully at home just last night. I knew he was on his way to the bridge, and I was hoping that, if it had to happen, it would be that way.  I bet Piper greeted Hamilton at the bridge this morning and now they are chillin' together.

Comment by Erica Palowitch on February 24, 2011 at 12:57pm
So sorry for your loss. She sounded like sweetheart and beautiful one at that.

Comment by Gromit, Sparkle, and Doug on February 23, 2011 at 11:42pm
Your little friend left this life warm and safe and well loved.  Who could ask for more?  Sympathy hugs from me and Gromit.

Comment by Beth on February 23, 2011 at 10:10pm
So sorry for your loss.  How nice that she was able to go peacefully, at home and loved.   What a beautiful tribute you have written.

Comment by David on February 23, 2011 at 9:44pm
God bless you for rescuing her, I am sure after her full and happy life with you, she is waiting for you at the other side of the rainbow bridge.

Such a great picture.  Thank you for telling us about Piper.  It's difficult to loose them and a big adjustment to live without them!!  Sounds like you both had the best!!  I'm sorry!!

Comment by Nicola Porter on February 23, 2011 at 6:03pm
Run Piper Run to Rainbow Bridge, where all our beloveds have gone. Must stop crying.