I'm a very bad blogger! I didn't realize I haven't posted in so long. Wow! So much has happened since the last time I posted. Late October, let's see, in mid-November I sustained 3 pinched nerves and had to stop all training. Heck I had to stop everything! I spent most of the time the weekend before Thanksgiving and the weekend after Thanksgiving going to the doctor and the ER to get pain meds until they'd actually DO something! I had one pinched nerve in my neck and 2 in my upper back. I had shooting pains going down my left arm and couldn't feel some of my fingers. Eventually, after the MRI showed the pinched nerves and I'd about maxed out on the pain killers the ER could prescribe, they did a block in my neck and after about 3 days I was able to actually sleep for more than 1 hour. Yeah! I was off work for 6 weeks recovering and went back to work on January 1. Hence no tracking and no agility from Thanksgiving until January 1.
Tracking at this point was pretty much a goner. I was still pretty weak and couldn't walk far even after I was given the OK to go back to work. Plus it was a hard January. Really cold and tons of snow. I wasn't up to tromping through it so basically the tracking ended. I did try to track several times but Dudley would just hide when he'd see me get out the harness. I tracked with Dudley as much as the weather would allow me and then the agility and tracking tests started up. I'm the chief cross track layer for most of the tracking tests they have here in Kansas City. I really enjoy doing the cross tracks so I volunteer for all the tests. In between those I started back on the agility circuit. I started small. Since I was still recovering I did "day of" entries at a NADAC trial. I'd do a run, see how I felt and then decide whether I thought I could do another. It's a shame they don't allow that anymore with NADAC. Oh well, another story.
I sort of decided that this year would be Dudley's AKC year. I wanted to get at least is AXP and AJP titles if we could. I've been working for a year on his Open titles. It's so HARD! Our training facility is about the third of the size of a standard agility ring so Dudley can never get up much speed in class. But when he gets out on the course at a trial, he's a SPEED DEMON! The boy takes my breath away. And all that speed is a two edged sword isn't it? It's wonderful that he's going faster because that means that he's more confident and certain of his job. But then again it's bad for me because now my timing is all off! And because our practice facility is so small I can't practice my timing there. I've been having to practice my timing at the trials. I try to go to 3 day trials and consider days one and two as warm up for day three. I figure by day three I should have my timing figured out and then many I can qualify (or at least come close to qualifying) on at least one run.
I honestly don't know how people with Border Collies cope with all that speed! It's all I can do to get the cues out as fast as Dudley needs them. He's well under Border Collie speeds and it takes my breath away. For his Novice FAST Preferred title he got 60 points (needed 50 to Q) in under 15 seconds! I hazard to guess how fast a BC could have done that course. They would have just been a black and white blur on the course. Anyway, so it took us almost a year to get our Open titles. Dudley got his Novice titles last year in April at Cardigan Welsh Corgi Nationals. He just last month got his Open titles in Wichita at the Sunflower cluster. Almost exactly a year has past. I've learned a lot but I feel I still have a long ways to go. I'm still training at the trial. We're in Excellent A and have 2 legs in Standard so far. We got one in Wichita and we just got the second 2 weeks ago at the Greater Kansas City Dog Training Club AKC trial. This coming weekend we have the potential to get our third Standard and our first Ex A JWW leg in Arkansas. I'm excited. This trial is being put on by the Northern Arkansas Kennel Club. This is their first ever agility trial. I have a friend in the club so I'm going down to support their club. I bet it will be a great time.
Last weekend we went to Iowa to a Susan Salo jumping seminar. We went to the same seminar last year but I didn't get much out of it. Dudley was a different dog a year ago. He was soft and unsure. I spent most of the class trying to get him to run. I was so focused on trying to motivate him that I didn't get a lot out of the class. So I repeated it this year. I got a lot more out of it. Now I think I'm actually understanding what the exercises are for and how to use them. I'll have to remind myself by watching the DVDs but the bottom line is I'm more comfortable with what I learned. And Dudley had a ton of fun too. :D
Well I think that's got everything up to date on the Dudley front! 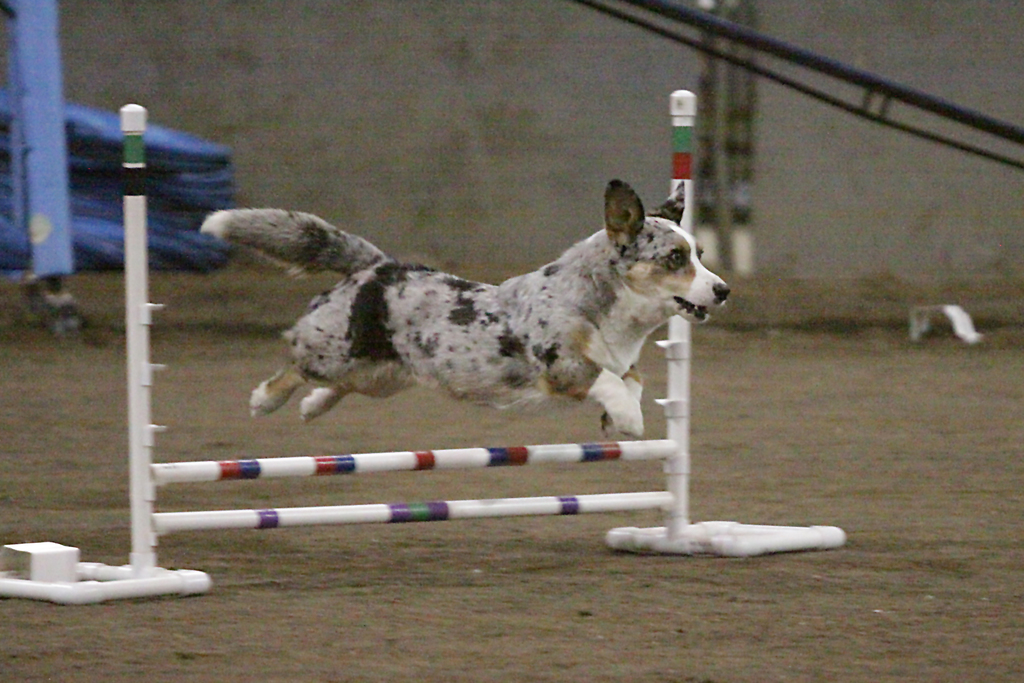 Comment by Bev Levy on May 4, 2010 at 9:07pm
Glad you are doing better! You have had a tough year and Dudley looks great.