...that Ruby is not a purebred corgi?

This morning when I took Ruby in to get her stitches out, I finally extracted a certificate of spaying from the vet's office -- they had my old address and had mailed a copy there. When I came to light long enough to scan it and send it to Lindsay, I noticed that they had described her as a "Corgi cross."

Called and said she's a purebred, and they said they'd send out another form. But...hm. It's easy to see why a person would think she's a mix. Her body looks corgi-like enough, but her face and especially her eyes do not, and even her pointy ears look a little off.

Her eyes look nothing like a corgi's: they're smaller and more almond-shaped than Cassie's. Also, she lacks that black "eyeliner" rim around her eyes that most corgi's have. Her ears are larger, rounder, and even more bat-like than Cassie's. Cassie, who I don't believe is a "fluffy," has a smooth but thick, lush coat; Ruby's coat is short and has no "mane" around the neck -- there's no way this pup could shed dog dunes on the floor. She kind of looks like a corgi with a basenji head.

Could something un-Corgi-ish slipped in among her forebears? Was great-uncle Fang secretly a doberman pinscher? 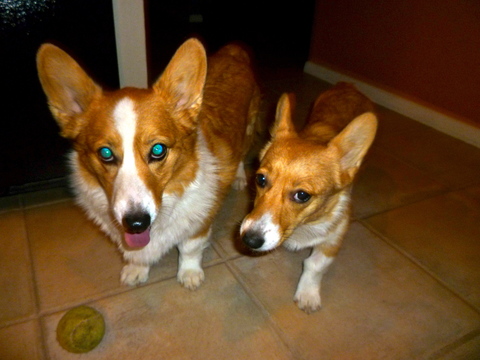 "Please be patient, God isn't finished with me yet" seems to apply here.

Hmmm.... Possibly she's part kangaroo? She makes the most adorable "ooorrrrroooo" sound! My son calls it "a trill."

I agree, she looks corgi to me as well :)  still in the growing phase thats all :)

Comment by Samantha de Jager on July 26, 2014 at 2:18pm
Don't worry. She'll be fluffing out and chunking up in no time. It took Penny until almost a whole year to get her mane and she still hasn't reached maximum fluffiness. Ruby is still young. Her time will come.

She looks full corgi to me.  Katie doesn't have a blaze either.  I can't talk about transition from puppy to adult because all my corgis were adults when I got them.  Max is a large corgi....he goes 35lbs and has huge feet and both his parents were champion show dogs.  His sire is from S Africa, I've seen pictures of him.  Jonty was also a huge boy...but he was within AKC standards.  He was shown here by Anne from Heronsway, attained his US title before going back to S Africa and getting his title there.  He sired several litters while staying with Anne here in the US,

She looks like a purebred Corgi to me as well. The ears, the white collar, and those expressive eyes and "eyebrows". She may not have a blaze on her head but there are plenty of Corgis like that too. The way her coat is in the photo reminds me of what Hazel's coat is like right now. He almost 5 months and a purebred porg..I mean Corgi. :)

she looks like shes at the awkward stage. she still has a bit of growing to do but she looks full corgi to me. baden was rather lanky and long when he was about 7months but now hes 2 1/2 and filled out very nicely

She looks pretty darn Corgi to me :-)

To me, she looks like a pure Corgi, just not a real typey one.