Ziggy did the funniest thing earlier.. I was sitting on my boyfriend's lap in the computer chair while Ziggy was perched on the edge of the bed, staring at us.. After about thirty seconds, he starts slightly moaning under his breath.. Then it escalates to whining at a moderate volume.. On to loud "HEYYYYYYYYYY" squeals, accompanied by paw slamming on the bedside.. So, at this point, I get up and go sit next to him, and my boyfriend faces back to his laptop.. Ziggy quiets down, seemingly content and then my boyfriend swivels back around to tell me something---and Ziggy looks him dead in the eye, put his right paw (the one furthest away from me) in my lap, scoots up and lays his front half in my lap, keeping eye contact that seemed to be screaming "Mine." until my boyfriend spun back around LOL.. I laughed way too hard.

On another note, I finally got word from my job--went through two days of orientation and one day of training, which ended yesterday, and start tomorrow! Yippee! We have to move by January. I am kind of nervous because it seems like there aren't too many dog friendly places around here from what I've found so far... But, we'll figure something out! I'm so excited to finally be working haha. No more feeling like a bum, and finally, I can take care of Ziggy properly. Thank Mother Nature for Corgi Nation, though... I wouldn't have him at all without you guys.

Ziggy has been shedding so much for so long.. I'm so ready for his winter coat to come in and be done with it--blowing coat while his brush is in OR is just not cool lol :P Go figure, I asked my grandma to send me his brush---she sent me three brushes she uses for her dogs (who are so short haired and none shedding that they don't even need brushing anyhow) but not his... I was like "Grandmaaa... Nooooooooooo!!" when I opened the box... None of them do any good for him... I am almost suspicious of this.. My grandma told me of a brush she just got that picks up hair really well that she loves--and her is huge, floofy and sheds a lot... SIGH, Grandma. <3 (If she did take it, I don't think she meant to-she's pretty spacey lol).

Ziggy does not like me being gone lol... First day of orientation, he had no idea what was going on when I woke up early and got ready... Pretty much ignored me, didn't bother to worry about what was going on... When I got back, he was in my lap having "happy seizures" lol. The next two mornings, he did nothing but follow me from room to room, giving me "the eyes". My boyfriend told me that every day he would be mostly fine-sit by our bedroom door, or out in the living room... But the last two hours he spent whining and crying.. This morning when I woke up, he came and sat by me..  He was being very lovey, made me feel like he was happy I wasn't leaving him again... Poor guy.. I dunno how he's gonna react when I'm gone tomorrow-orientation wasn't as long as a full day of work.. 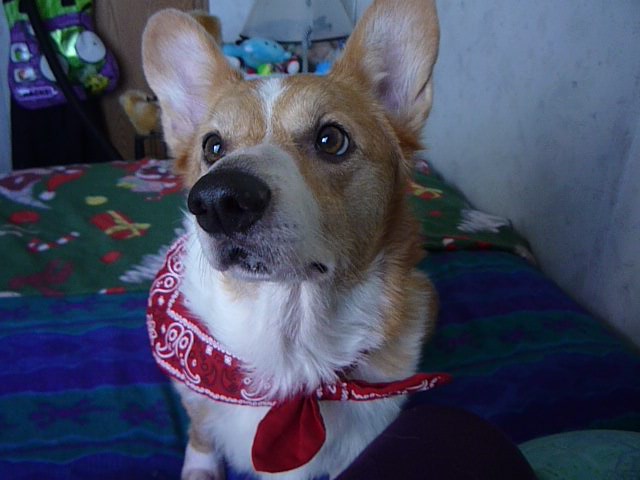 Comment by Wilson Waddlepants and Joyce on November 18, 2012 at 10:52am
Julia, your talent for capturing the Corgi spirit in your writing is beyond gifted ! One of the many reasons I love Mycorgi. We're not all just a bunch of obsessed Corgi owners; we truly have something to offer each other. Sometimes it's solace, sometimes advice, and sometimesl, as you have so aptly demonstrated, some well thought out humor that just makes people smile. Have a great Sunday !

Comment by Laura and Tommy Jefferson on November 18, 2012 at 9:17am
Hahaha love Julia's response! Ziggy is awesome :)

Ziggy seems to have a vision of a future that includes just the two of you, living day in and day out in a nice, fur-lined house. You might be allowed to go out on your own to buy corgi food, but there probably won't be many other legitimate reasons to leave him. Be careful. You KNOW he has the power. You KNOW he has the corgi mind meld technique. And you KNOW just how darned cute he's being. If he had thumbs he'd probably e-mail your boss to call you in sick. Even that would be cute.

Funny story and I'm glad to hear about your job !  Everything will work out great !

Sounds like you need to watch out for corgi mind control. :) His face in the picture looks like he is on his way to perfecting it. Have fun at your new job!