September 25 through September 27 we attended the GSLAC (Greater St. Louis Agility Club) Agility trial in Glen Carbon, IL. This was Dudley's first full trial at his regular jump height. Before I'd always entered him in Preferred which has him jumping at 8". This time he was going to be jumping 12". There is a lot more competition in the 12" group so there wasn't going to be any "first by default" this weekend!

We've recently changed our game when it comes to agility. I felt like Dudley was really good and I wanted to set a goal for him to qualify to go to a National level competition sometime in the future. I don't expect us to be competitive at that level, I just want to go! I mean, how fun must a National Agility competition be??? I know that Cardigan Welsh Corgi Nationals are a ton of fun so a National level agility trial must be fun too, right? So, because of that goal, I started taking private lessons. I felt that's what was needed. I mean Dudley is great at agility, but I'm a mess! I'm a walking advertisement for "Great Dog, Shame About the Handler" sometimes! My timing is off and I don't know how to decide what to do to handle a course. I'm getting better but I felt I really needed some personalized instruction to proceed as quickly as I wanted. So that's what I did. I found a great instructor who is teaching me a different skill set than I'm getting in my group lesson. It's working out swell. I'm getting a lot of good training from group and a lot of good training from the private lesson also. My instructor for the private lesson told me that I need to change the game. He said that Dudley was "pacing" me. Dudley was running with me and only as fast as I ran. But Dudley can run a lot faster than I can so it was time to change the game from "run with me" to "catch me if you can". OMG! If my timing stunk before, now it REEKED!

I practiced and practiced but didn't feel like I was getting any closer to figuring out the timing. There's too much for my feeble brain to think about! I have to watch to see when he's committed, make sure I turn after he's committed but not too late, don't run into any of the obstacles on the course, don't "spectate" (turns out I do this a lot) and remember to cue him. Plus it doesn't help that he's figured out that he's supposed to go off on his own and run like the wind. So how he's running faster so I have to cue even quicker. AAAAAAH! Well the trial date came even though I wasn't ready. Off we went to the trial.

On Friday and Saturday we were entered in Novice FAST, Novice JWW and Novice Standard. We had to be at the facility at 7:30 am on Friday and Saturday for the Novice FAST walk through in Ring 1. The send portion of the Novice FAST course was tricky and almost none of the Novice dogs Q'd. The send was a jump with a U shaped tunnel. One end of the U was directly in line with the jump but of course you weren't supposed to go in that end. I thought that for a Novice level, that was a bit of a tricky send. We didn't get it. My timing was off. I was too slow with my cue so he wan in the tunnel before I realized I was late! Dudley's so darn fast now! Little bugger! It was a fun run anyway and FAST is always good practice. Our next run was JWW. My heavens what a mess that was! My timing was so far off he was just flying around the course taking all sorts of jumps I didn't intend. But then they were exactly the jumps I was pointing toward so "good dog"! I was a mess. He did great though and had a marvelous time. We didn't Q though because even though he did make it around the course, we knocked a bar. I think we were even over time. We had to take the weave poles at least 4 times I think. On to Standard. I figured I'd go for broke and try to layer some equipment. Why not? I need the practice, right? Here's the course: 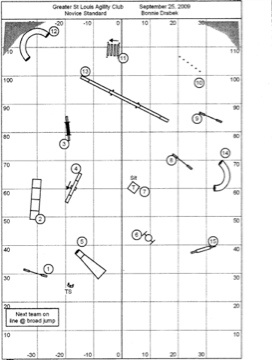 I thought that when we came across the dog walk (13) I'd send him to the tunnel while trying to run between the table (7) and jump 8. However I turned to run that direction before he'd committed to the tunnel. For a change I was early! That mistake pulled him off the tunnel to come running with me. Oops! So I tried to take him back to the tunnel and he back tunneled! Oops! But I did have the presence of mind (while I was actually saying "Mommy messed you up!") to send him back in the tunnel correctly and finish the course. We actually qualified! I got a couple of faults for my tunnel mishap but it was still a Q. Woo hoo our first Q of the weekend! And a first no less! I actually didn't even know I'd qualified. I was so certain I had too many faults that I didn't even pick up my yellow sheet. It was late in the day so we just went back to the RV and crashed.

Here comes day 2. Once again we had to be there at 7:30 for the Novice FAST walk through. I made the course into a big upside down U. The send was on the right and was a tunnel and a jump. The tunnel was 9 and the jump was 2 so if you got it that's 31 points so you only need another 19 to Q at Novice. I took the start single jump to the A frame (8), over a 5 point double, another single jump to a 4 point tunnel, over another single jump, into the send and over the finish for a total of 51. Woo hoo we Q'd! My policy is to get my 50 and get out so we got 4th. Yippee! Our first FAST Q! On to JWW. Well, I was back to looking like I'd never handled a dog before. My timing was slow and my cues late, but they were closer than Friday so Dudley pulled it out with no faults! Woo hoo we Q'd! We had to take the weave poles 3 times to hit the entry which slowed us down so we got second. Yippee! Our first Q in Novice JWW at 12"! Yippee!

At this point I went and picked up what I thought were my JWW and FAST ribbons. Later my husband informed me he'd picked up Dudley's JWW ribbon for me. But I'd already picked up his two ribbons for the day...that's when I read the back and discovered I'd Q'd in Standard the day before. Jackpot! Now, on to Standard. I was kind of a serpentine that we did really well on. My timing was getting better and I was learning from my mistakes. Here's the course: 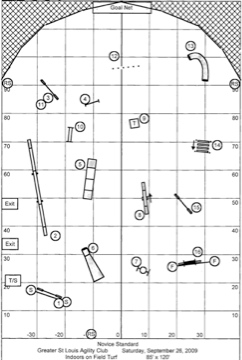 I did a strolling start and released him when I got to the dog walk. He overtook me and got down the walk before I was there so I cued him to go over 3 while I ran over to the right of 4 to front cross and take him over the A frame and into the chute. I made sure as he committed to the chute that I was moving laterally to position myself between the tire and the teeter so he'd know to head to the left out of the chute. He did it perfectly. He went over the teeter and then even though I decelerated to the table, he did a touch and go for a table fault. I got him back on for his down and actually left him there an extra second after the "go" so I could take a breath. I sent him over 10 and didn't go past 4 so I'd be ahead of him when he took 11 and headed toward the poles. He entered them perfectly! I sent him to the tunnel and after he committed I booked for the end but he passed me by in no time. Woo hoo we Q'd! And we took first! Our second first in Novice Standard for the weekend. Yippee!!! And I was finally getting my timing down. We went back to the RV and all of us crashed! We were exhausted.

Sunday there was no FAST so we got to sleep in, sort of. We had to be there by 8 for the Novice JWW walk through. OMG my timing was finally very close! According to my husband Dudley couldn't have taken a tighter line on the course. However I think I cued just a tad late on one jump because he knocked a bar. But I was still totally pleased. It was a BEAUTIFUL run! Just beautiful! We had a big party. Now for our last run of the weekend. It was another great run. I pushed even more and layered more obstacles and Dudley did GREAT! Our only issue is that darn table. Dudley wonders why they put such a horrible thing on such a fun course. Do you know you have to stop on that sucker? It's just no fun at all. This time instead of a touch and go he just blew past it for a refusal. But I brought him back and he did it and we had no other faults. Woo hoo we Q'd! And took first! And that was our Novice Standard title!!! I couldn't believe it! I had to stick around for the ribbon because until it was out I didn't know what place we got. First in Novice B! And to make it even sweeter Meliss and Dwight were there. They adopted one of our foster Pembrokes, Teddy Bear. Teddy was there but not competing. But his 'brother' Coco Bear was entered. Coco was entered in Novice A and he got his Novice Standard title too! Woo hoo!!! And he got first too!!! Yippee!!!

How exciting is that? I had a great time and I think Dudley did too. It was fun to see Meliss and Dwight, Coco and Teddy and all our other agility friends in St. Louis. Now, on to Open Standard. How confusing will it be to do 6 weave poles in Novice JWW while doing 12 weave poles in Open Standard? Hmmm...

Comment by Avyon on September 30, 2009 at 12:26pm
Awww sounds like you had a blast! I can't wait for our very first training tomorrow night!