1/8 - UPDATE: The licking has begun. :(  Cone of shame is not going to cut it; headed to Petsmart to find a donut (because Petco doesn't have any).

Jon Farleigh underwent the "procedure" yesterday. This is how he looked last night: 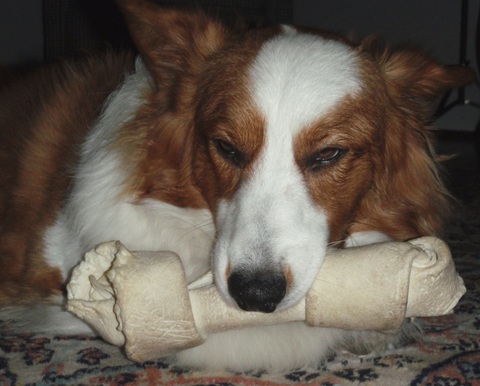 Can you say "grouchy"?

(He was determined to show Dewi that he was still higher in the pack and refused to release that half pound rawhide -  even though he was half asleep and had no interest in chewing it! [C.I.T. - Corgi Intimidation Tactics])

I am happy to report that so far he's been doing nicely physically. However, as many posters with newly altered corgis have posted before, he's already trying to rumble with brother Dewi and chase the cats.  He's gonna get to see the inside of the ex-pen today.

Comment by Elizabeth on March 25, 2011 at 9:41pm
Taffy - Ha, yes, my Dewi only has one...he's scheduled for the procedure in a couple weeks (poor baby). I hope I can report to everyone that it all went well.

Comment by Taffy (corgi is Hercules) on March 25, 2011 at 3:46pm
So I found we have something else in common Hercules "2nd" has not descended. He has not  been neutered yet.

Comment by Elizabeth on January 7, 2011 at 4:50pm
Chris - I was wondering whether anyone would get that really bad joke of mine. :)  I just couldn't help myself. :D

Comment by Nicola Porter on January 7, 2011 at 2:27pm
Cute jon farleigh even though he is a grouchy jon farleigh right now.

Comment by Jane Christensen on January 7, 2011 at 1:58pm
He deserves it! Glad all went well and hope you recover quickly Dewi!

Comment by Bev Levy on January 7, 2011 at 1:09pm
No matter how groggy any self respecting corgi would guard the rawhide!