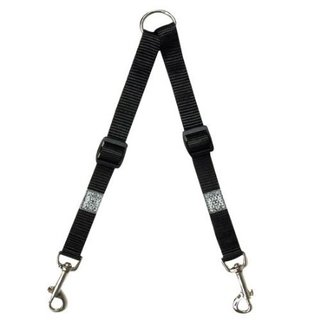 As dawn cracked, it was OUT THE DOOR with Cassie and Ruby lashed up at the ends of our weird new double-doggy leash. Although we've been doing short doggy walks around the block, this was Ruby's first mile-long expedition.

Ruby does surprisingly well on a leash, for a puppy pushing adolescence (a state we veteran human parents are given to calling "addled-escence"). After some initial pulling, she settled right in and walked along smartly.

Cassie is trained to some strange commands, I'm afraid: "forward" meaning "heel," "pay attention" meaning "I'm about to issue forth some earth-shaking encyclical," and "sidewalk" meaning "stay out of that street." Naturally, I can't do anything the normal way. She also is trained to certain hand commands -- she will go left, right, or angle off in one direction or another according to the way I point my arm -- she actually will do this off the lead, interestingly. Pup has not yet registered that when a human is pointing at something, it has meaning. Cassie learned this because the human was too lazy to lift itself out of a chair to retrieve a lost ball but instead would point at wherever the thing was hiding. Pup, not being psychotic about Ball, may never figure that one out.

At any rate, except for having to dodge several lunging, off-the-lead mutts belonging to folks who think the world revolves around them, the walk was pretty uneventful. Two runners were severely distracted by Ruby's extreme cuteness and had to gasp out compliments as they shot past.

We had to stop and let Cassie rest twice. It's about 82 degrees by 6:30 or 7 a.m., which for Cassie is too warm. Her idea of perfect walking temperature is about 65, not surprising given her origins in the British Isles. On a day in the mid-60s, she'll go forever. But in the 80s she poops out after about half a mile. Pup, whose fur is much shorter than Cassie's, doesn't seem fazed by an 80-degree morning. And of course, she's just utterly hypnotized with joy by all the new smells, sights, and sounds.

The double leash, lately purchased at the pet store, is reasonably successful. It works well as long as you keep both dogs on one side of you or, if you prefer,  you allow them to walk ahead of you without dragging. It's fairly easy to manipulate one leash to communicate a correction for dragging without disturbing the the unoffending dog. The only problem occurs when one dog becomes distracted and steps behind you to go from, say, your left side to your right side. In that case you get a very annoying Maypole effect! Then you have to stop, unwind yourself, and firmly reposition your walking companions.

Both dogs are now evincing a great deal of contentment. Cassie is resting in her favorite position, under my feet, and Pup is parked out in the yard, grinning up at passing butterflies and birds.

I believe her next adventure is going to be a swimming lesson. Now that it's warm enough for me to get into the pool, it's time to train Pup to get herself out of the thing the next time she falls in the drink.