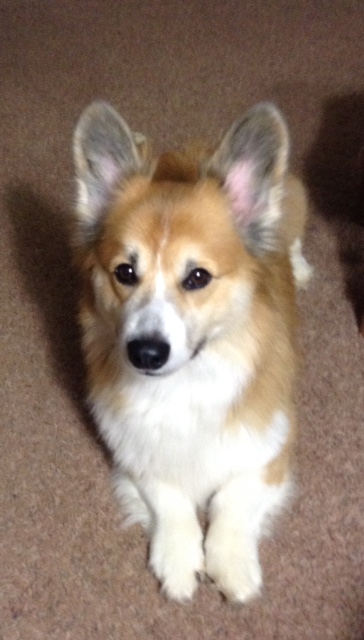 He really  is a beautiful boy!

What a pretty boy RANDY is! Happy 4th birthday!

Max is getting his long coat back too.  We had him clipped down real short not for the heat (tho he does get trimmed shorter for summer).  He had to have a soft ball sized fatty tumor removed from his side so I figured it would just be easier having him trimmed short with having to have a large area shaved.  Had him trimmed out twice since the surgery so the huge bald spot is now almost the same length as the rest of his coat.

Max would have refused squeaky toys too if knew that bones were on the menu.

HAPPY BIRTHDAY, RANDY!!!! He looks so trim and handsome!!!! We have been enjoying this cooler weather too! It is a beautiful fall here so far!! :)

Randy refused the new squeaky toys and kept waiting for what was to come.  I must have told him or someone that there would be bones for the birthday so he kept waiting for them.  The dogs are now chewing and growling sometimes just in case the other one might be thinking about their bone.

Thanks for the birthday wishes.  His hair is almost most grown out from his summer clippings (heat intolerance).  But I have taken too many pics all of his life and he does not cooperate plus I'm having to use my iPod since the lens mechanism on my camera doesn't work anymore.  But he is back to the fluffy days and has been frisky since it is cooler here now.

Happy 4th Birthday from Max and Katie and their human.  What a handsome fluffy guy!  I'm rather partial to those big old fluffy fellows!  Wishing you a sirloin for dinner followed by cake and ice cream.

Wow...seems like he was just a babe:) He is so handsome. "Happy Birthday Randy" Hope you get some good treats today!