Hooorah! Ruby the Corgi Pup has got the idea about walking nicely on a lead. What a clever little dog she is!

The adventures in medical science -- nine months' worth -- put the eefus on my puppy-raising schemes. It was all I could do to resist having to return her to the breeder, much less walk her every day to get her properly leash-trained.

When she was pretty little, I realized that she did better with a harness than with a collar, and so when we've been out and about, Cassie has been sporting her usual martingale collar and Ruby has been doing the sled-dog routine in her harness. We've been using one of those two-dog tandem leashes, which works quite nicely to keep them from tangling each other up. Cassie always takes up a position on the left and Ruby walks (or lunges) next to her on the right. For the first half-mile, Ruby tries to drag us to Yuma, but after that she calms down and walks along OK.

But as Ruby has come into her own as a young dog, she's gotten bigger, stronger, and more vigorous. The dog-and-human drag now lasts the better part of a mile.

Well, the other day the Iditarod got a little old for the human, so, knowing that Cassie will heel handsomely off the leash, when we got to a quiet corner of the 'hood I slipped Cassie's collar off and put it on Ruby. So now Ruby had two leashes: one on the harness and one on the collar. 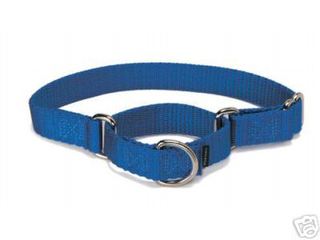 And lo! As by magic, she's walking right along as if she were civilized!

We come upon my friend Harriett with her big old Heinz 57 dog, Sadie. Ruby does NOT fly into an ecstatic frenzy to greet Sadie and jump all over her. Sadie looks relieved. Harriett looks surprised.

I cannot believe it.

So this morning, the Acid Test: Both Ruby and Cassie in their martingales, clipped to the Two-Dog Leash. And...hang onto your hats...

From the git-go, she DID NOT DRAG! She trotted right along, Cassie to the left of me and Ruby to the right, as though she had good sense. A couple of times she pulled a little, but the instant the collar tightened, she fell back into position.

We came upon the couple with the fat chocolate lab. She did NOT try to charge over and bound up to the lab. She did love up the lady human, who came over to admire her, but she did not pounce.

We walked past a guy in the park with a little dog running loose off the leash. She ignored the little dog.

My goodness. The Light of Heaven dawned at 7 o'clock this morning!!!

Lucky you!  I wish Jeli would get the idea of a nice, gentle, civilized walk.  We have moments after about a mile or so, and she is better than a year ago, but I've just completely blown the whole "teach your dog to walk nicely on a leash" trick.  It takes a level of consistency I haven't mastered.   I marvel at dogs that walk nicely on a leash.  Good for you!!!

They do want to examine every leaf of grass along the way. That, apparently, is important in the corgi scheme of things.

Because I'm trying to get the fat off (again!!!!), we're walking pretty fast or even running, so they don't have a lot of time for leaf-examination.

Comment by Gwyneth Newcomb on April 5, 2015 at 7:24am
It is reassuring to know that most Corgi humans are having or have had the same issues. Do your dogs stop to sniff every 6 feet? It will be a lovely day when Tajar does not lunge at other dogs barking "play with me!!"

@ Frances: LOL! They're not so high anymore. Except for the occasional episode of having to run the washer 7 hours at a time to get the sand out, I hardly use it. I've taken to washing everything that's not flat (i.e., sheets, blankets, and towels) by hand. I'll use the "rinse & spin"  cycle as a centrifuge -- wrings out the water, with the added benefit of a half-baked rinse -- but otherwise... It's back to living in the 1950s.

Glad you enjoy the posts. Life may not be unfair, but it sure can be hilarious. Do we live in a Monty Python Show or a Kurt Vonnegut novel...that's the question.

Anybody puzzled about what this exchange is about? Check out the saga of the corgis, the sand, and the washing machine.

Vicky, your posts make me laugh! Poor Ruby hasn't a chance: you've got the Corgi owner temperament (aka stubborn & one step ahead of the posse).

Vis a vis the samsung washer, the water bills must be huge. While I am now back in Ireland, I did live in the States almost 20 years ago & got a Sears card for the express purpose of getting a washer and spreading the payment: they had some interest free deal for a period of time. Over six hours trying to wash a pair of jeans...that would age you.