Ducks, Bees, and Dogs: NEVER throw anything away!

Welp, it turns out to have been a good thing that I hired my old landscaper Richard to build a little fence between the swimming pool and the back door (and the doggy door, conveniently).

Yesterday Ruby the Corgi Pup went into a corgi-baying frenzy in the back yard:

Holy mackerel! Did one of the meth-heads hop over the back wall? Whaaaa?

So I race out there, and what do I see but this little intruder: 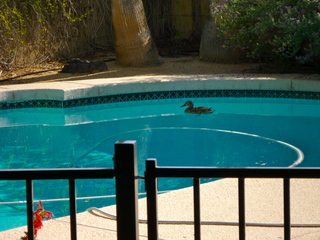 ooooohhhhh that corgi WANTED that duck!

Fortunately, she couldn't get into the pool area. If she plunged in, she wouldn't know how to get out, and the water is still a bit on the chill side for me to dive in and haul her to the side. If you'll recall, last summer while I was getting operated on about every ten minutes, WonderSurgeon announced in no uncertain terms that I was to stay out of the drink; thus Ruby did not get swimming lessons.

Okay, so that's amusing. I guess.

This morning, along comes the tree pruner, Luis. He vanquishes the man-eating palo brea in front and then enters the back yard to trim the palo verde that wants to eat Philadelphia.

There he finds a brand-new band of Africanized bees, cheerily taking up residence under the deck!

Unfortunately, when wild bees decide to build a hive near an occupied property in Arizona these days, you really do need to get rid of them. All wild bees in Arizona are now Africanized, and every year somebody and their dogs and their horses get a massive stinging. Some people actually have died from these attacks.

So it was off (metaphorically) to Angie's List, where I found a guy who purports to use "organic" products in his exterminating enterprise.

"Oh right!" scoffed I to his young face. "I've heard that wind blow before!" He swore everything was organically derived and he's the only exterminator in AZ using organic and on and on and aaaahhh, the wind in the willows!

So I hired the kid. There's an outfit in southern Arizona -- It's called Arbico, by the way, in case you're into things organic -- that specializes in organic, low-impact agricultural & gardening products. So it's within reason to think he's been proselytized by those folks. We shall see how he does.

I hate killing bees. Hate it hate it hate it. But I can't take a chance with those dogs out there. Nor with myself: that deck is my favorite place to sit in the mornings, for breakfast and coffee.

The Green Exterminator (snark! is that or is that not the best oxymoron since "Army Intelligence"???) will be over at 10 p.m. tonight, about the time my neighbor and I get back from this evening's Chanticleer concert.

Meanwhile, Ruby and Cassie need to use the Great Loo That Is the Backyard. The first guy I called said it would take 48 hours to make an appointment...when I emailed my son with the proposal that he should dogsit these two for the next four days or so, no response was forthcoming. (How can that be? :-D )

So, figuring the little ladies would be holding forth for several days before something could be done to evict them, I decided the best scheme would be to build a barricade across the backyard's narrowest reach.

Fortunately, I never throw anything away.

Out behind the gardening shed on the far side of the property is the Graveyard of the Done Doggy Barriers. Wire garden barriers. Wooden garden barriers. Cinderblocks. Bricks. Old trellises decorated with shade screen. And, thank goodness, a number of pots still weighted down with old, dried-out potting soil.

Hence, the Great Wall of Corgi: 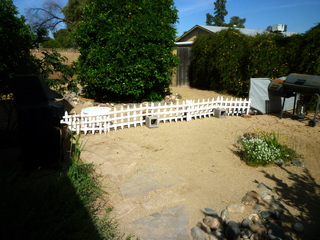 The desert landscaping is too hard, unless soaked for some time with water, to drive the fencing into the ground. So it's lashed together with waxed cord, which I hope to retrieve and re-use whenever I can take the thing down.

Ruby has learned to get through some of this stuff, so what we have here is THREE LAYERS of wire and wooden pickets, tied onto an old barbecue and other pieces of junk and debris. 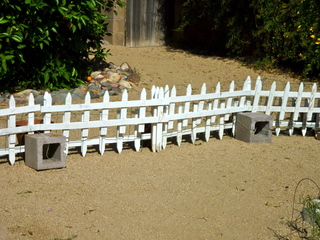 What a mess! There's no way that dog is gonna get through that junk. And isn't it a good thing I didn't throw it away when I should have?

So there you have it: Never throw anything away. Quack!

@ Holly. Presently they can be dangerous if molested. It's a story that sells papers, and so the media have exaggerated the risk; in fact they'll leave you alone if you leave them alone.  However, as we see by people's relations with dogs, humans can be remarkably naive where other species are concerned. Last October a yard man was killed when he and three other workers disturbed a hive in a small town near the border. All four men were developmentally disabled and so may not have understood the risks. And a couple of days ago, three dogs were killed in a Phoenix suburb.

Over time, the African strain of honeybee (the honeybee originated in Africa, migrated to Europe, and became less aggressive during the Ice Ages) may mellow out if it's bred into European honeybees enough.  But that's not going to happen very fast, if ever. Until that golden day, bee colonies should not be allowed to remain near or in occupied dwellings -- whether the dwellings are occupied by humans or livestock. Nevertheless, the Africanized strain is thought to be resistant to colony collapse disorder and so may save our agricultural tails one day: https://www.hcn.org/blogs/goat/killer-bees-could-help-solve-honeybe...

The Oklahoma State Agriculture Dept has one of the best discussions of Africanized bees around: http://www.oda.state.ok.us/cps-bees.htm

I don't mind regular bees but the African bees are really vicious, correct? That would freak me out. Nice fence though. I throw everything away. Not enough spare space.

awww poor bees :( though must say I am impressed with your work there! XD

Bees are lovely, in general. It's not their fault some fools in Brazil chose to import highly irascible bees and then idiotically let them loose, nor is it their fault the savage African bees interbred with European honeybees from Brazil north through every tropic and temperate climate zone they came to. We need our honeybees to pollinate our food crops -- to say nothing of our favorite flowers -- and they are blithely headed for extinction, due to several causes. When the bees are gone, we will be gone, because we will no longer be able to grow enough to eat.

So it's unfortunate that, thanks to human stupidity, we have to exterminate hives that get built near human habitation...which is, equally unfortunately, ubiquitous.

Those bees sound horrible!! I would probably burn the house down and move on. Good luck with the resolution.