So the other night we were watching TV when we hear Ashton let out a little yelp. He was under the coffee table and came scampering out and up on the couch. He had his Nylabone with him and I thought he might have bitten down on it in a funny way and hurt himself. I give him my usual once over and he seemed fine and wasn't upset so I let it go. A few minutes later I look down and see this: 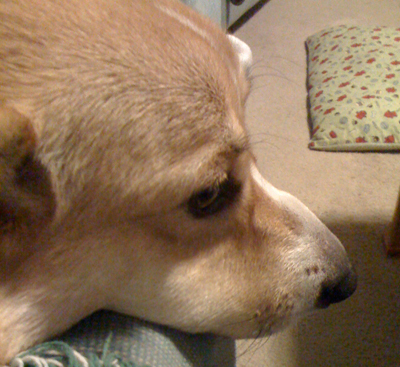 Aargh! Swollen face! The only thing I can come up with is that he found a spider and as he "played" with it he got bit a few times. Top of his muzzle had a bump along with the corner of his mouth on the right side and under his chin were swollen. He looked like his muzzle belonged on a Bull Terrier! Oh poor puffy puppy!

No worries, after the initial fretful corgi mom shock wore off my vet tech side kicked in. I gave him a dose of Benedryl and his swelling came down in no time. :)

Comment by Beth on November 14, 2009 at 8:29am
Poor Ashton! I'm glad the Benadryl worked. Maybe now he'll think twice before poking at bugs. We had a Springer Spaniel when I was a kid who used to catch flies. Unfortunately once or twice she got a bee by mistake, but she never had a reaction to it.

Comment by Jane Christensen on November 14, 2009 at 7:39am
Thank goodness for that Benadryl!!! Hope he's doing better!

Comment by Potus on November 14, 2009 at 5:03am
Poor Ashton! Hope everything is okay now. I get so scared that Potus is going to play with some dangerous insect or spider. Luckily when he spies a bug he lays down and his tail wags as he watches whatever it is, so we can usually get to it before he can.