When Ponyo was rescued from an animal hoarder, where she had been free fed and also given table scraps, she weighed 27lbs, which on her tiny frame was quite fat. The vet that her rescuers took her to determined that since she's actually a bit of a runt she should be around 20lbs. When she was delivered to us a couple weeks ago, she had lost about 3lbs. According to my oh-so-scientific method of holding her while standing on my bathroom scale, she is now at 20lbs(I'll refrain from letting you know what the actual number on the scale was...), after being on a diet and getting lots of exercise every day. Once we have our vet confirm that she's at target weight, I'll take her off the diet, which I'm sure will thrill her. 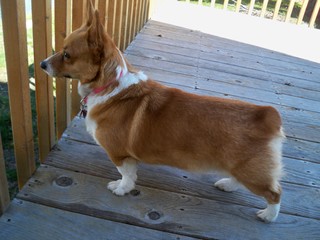 Ponyo when she was first rescued

Congrats!! What a great before and after shot! It looks like you rescued her twice over!

I also use your scientific method to weigh my corgi. ;)

Comment by Tris & Jeanne on May 2, 2011 at 5:11pm
Ponyo's "Before" picture looks suspiciously like My Great Big Fat Corgi that I have at home!  We just took Fox to the vet the other day for his Kennel Cough update.  He was 30 lbs about 6 months ago.... this time he weighed in at a whopping 33 pounds.  Not acceptable and totally my fault.  So now, we are both exercising more and cutting back on the kibble.  It's cutting back on the reward "treats" that are especially hard on us.  Congratulations on Ponyo's "After" picture!  Looking Good!

Comment by Kayla Rae and Rowdy on May 2, 2011 at 3:20am
Ponyo is the perfect name! What a cutie pie! She looks fantastic!

She's so lucky!  And I love the name-- I am a huge Miyazaki fan and use "Ponyo" in my children's literature class.