TIG is now known as TIGZILLA! The biggest, naughtiest corgi ever! I've been 'acclimating" TIG to going to the barn and being around the horses. I use the term acclimate loosely cuz the barn seems to be where TIG is the naughtiest!

The barn where I keep my horse is set on about 50+ acres of paddocks open fields and riding arenas. Tig's favorite thing to do is run, run, run through the open fields and go sniff out critters. Then he does laps in the indoor arena. Once you left him off his leash, he's outta there. At first, I could get him back by shaking the treat bag, or by running the opposite way. Now, he will run about 100 yards and when he sees that his humans or his pack of corgis are not following him, he turns back.

Molly was so easy to train to the barn. She didn't get into any trouble, and she had a natural fear of the big, loud four legged creatures. Tigger...no so much. He runs through their pastures to eat poop. He sniffs through their stalls. He guards them away from THEIR horse cookies!

Yesterday, the horses started running up and down their paddocks. Being a corgi, the instinct to try and herd was TOO strong! He decided to try and herd a thoroughbred. It worked for about 5 seconds and then the TB bucked, kicked and farted. Then he turned around and made a B-line for TIG. He was going to strike at TIG. I was literally scared stiff! TIG turned around and headed right towards me- with the biggest, naughtiest grin on his face. He escaped death with just a split second change in direction. But THEN! He avoided me and went after the 1300lb warmblood, who did his airs above the ground at TIG! Finally, I got ahold of him and spanked him hard! But I couldn't spank him hard enought to wipe that corgi grin off his face. It was so, "WHAT?! It was worth it, beyotches!"

The other corgis were smart! The minute they heard hooves, they ran for the tack room! And didn't poke there heads out until I brought back the naughty one!

Here's some pictures of the naught TIG digging into the horse cookies. They weren't even my horse's cookies- but my friends!)
yuumm-yummmm-ymmm. Can't talk now, eating...nommm.....horse cookiess....yummm!
(His head was so buried, that his front paws weren't even on the ground!) 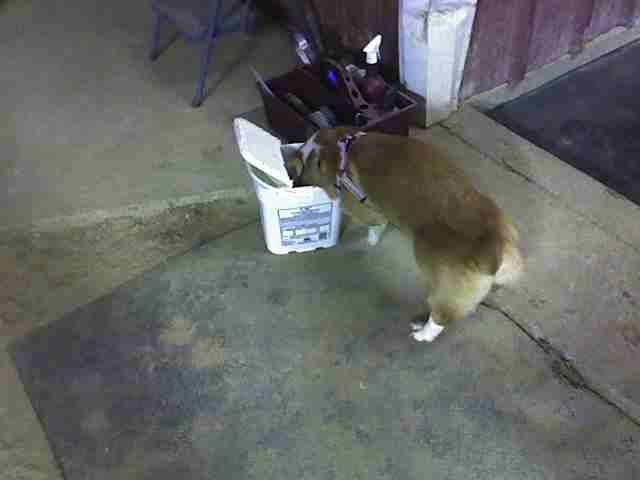 Nobody's Cookies but mine! ALL MINE!
p style="text-align: left;"> 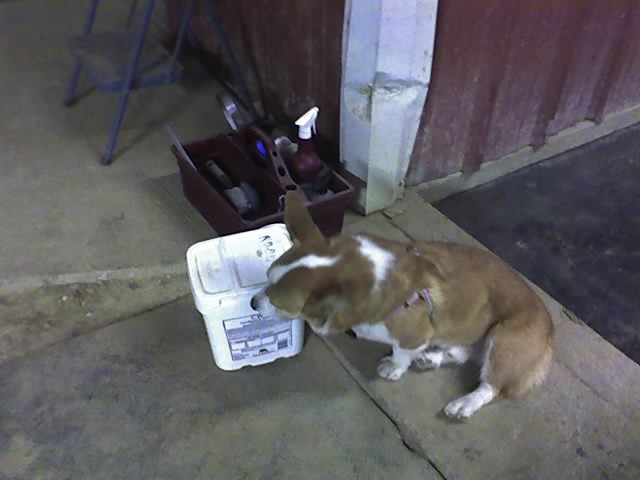 Comment by Cheryl on November 5, 2008 at 2:41pm
Aragon was pretty upset when the TIG started gorging down HIS cookies.