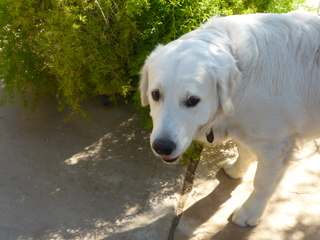 This noon my son dropped by and left the 90-pound Charley the Golden Retriever in my care. He -- son -- is headed off to Grand Junction, Colorado, with his father, uncle, and that tribe to celebrate his grandmother's 100th birthday. He'll be gone four days, and Charley is here, casa mia, for some free boarding.

I have to say, I was kinda worried. Charley is SO big, and he bounces around like some animated stuffed toy out of Winnie the Pooh. Tigger, wasn't it, who bounced? Worried that pup would be overwhelmed by the massif that is Charley.

You know, this little corgi is afraid of exactly NOTHING. Not one thing fazes Ruby the Corgi Pup. Charley gallumphs: Ruby dodges in and out. Charley settles down to chew up a bull dong. Ruby walks up to him and grabs it away!!!! Where Charley goes, Ruby is sure to follow.

Cassie has become quite motherly where Ruby is concerned, and so another worry was whether she would get defensive about the puppy. Don't want Charley to get bitten, and I sure don't want any conflicts between those two.

But no. No again: she has remained calm. Pup seems to be able to take care of herself, although occasionally Cassie will enter the fray and distract Charley, in a nonconfrontational way.

So far, so good. But this evening we had the Dinner Question.

Charley is an aggressive eater, and like all dogs, he's convinced that whatever the other dog has must be better than what he has, even if on the surface it seems to be the same stuff.

M'hijito brought over a couple of bags of kibble,

Objectively, it is true that what Cassie and Ruby eat is better than what Charley eats. They eat real food. Meat (a lot of it). Eggs. Cottage cheese (not much of it: too salty). Vegetables. Sweet potatoes or squash or oatmeal or quinoa.

So this presented a problem.

Charley was so excited about dinner that, after preparing all three dishes, I managed to distract him by putting his bowl on the kitchen floor. Then grabbed Pup and hollered at Cassie to RUN! And we raced down the hall to the bedroom before he even noticed we had left the room.

Stashed pup in her crate, which resides next to the bed. Darted out of the bedroom, closing the corgis inside, flew back up the hall, grabbed their dishes off the counter, ran back to the bedroom, and delivered the food before Charley realized what was up.

Worked tonight. But Charley is not a total fool, especially where food is concerned. In a day or so, he will figure this out. Then...well, I guess I'll have to come up with some other ruse.

Last night, Cassie was anything but calm there, for a few moments. Lordie!

I worked until about 2 in the morning. So absorbed was I in the computer task at hand, I didn't even notice the time passing. Pup had gone to bed in her crate. Cassie was loafing in the office as my fingers buzzed, interminably, over the keyboard. Finally, I happened to lift my head and notice the time. Knowing Pup would be awake no later than about 5:30 a.m., we decided it was time to go to bed.

I heard it first. I got up to hobble off to the bedroom when a weird, loud SCRATCH-SCRATCH-SCRATCH-SCRATCH emanated from the front part of the house. A millisecond after that noise hit my ear, Cassie went absolutely freaking BERSERK!

She shot up the hall in a rage, barking snorting and growling in full I mean business! mode. Holy mackerel!

I ran after her, not taking time to get my gun (extraordinarily stupid...more about which below).

Whatever it was quit by the time we reached the end of the hall. None of the outside motion-sensitive lights were on...but the ones on the west side are burned out, and that's where the side entrance to the garage is. There's a security door with a hardened lock on that door, but...ah, but...  I couldn't remember whether I'd pulled it shut after the dogs had used it for a yard frolic. And the door between the kitchen and the garage was unlocked. I threw the deadbolt.

Couldn't see anything on the west side...which meant I couldn't see whether the side security door was hanging open. There's a motion-sensitive light inside the garage which presumably would be on if anyone had entered the garage...unless the guy was bright enough to flip the switch to "off."

Cassie settled down; then a few minutes later threw another sh!t-fit. I picked up the phone to call 911, but then thought...I don't really know what to tell those people. "My dog is yapping?" Uh-huh. The only thing the burglar could do that would go "scratch-scratch-scratch" would be to try to pick a lock (bumping it would make a different noise). All the security door locks are pick-, bump-, and drill-resistant. Not so that kitchen door...and it was unlocked.

The dust settled again. We studied the situation. No way of knowing about the westside security door without opening the door to the garage, which I was not about to do. But there was not a sign of life out in the side yard. We waited. No more noises. No more barkfests.

I figure it was probably a rat. We have roof rats, and they get in the attic. What exactly a roof rat would be scratching in the attic, I do not know -- probably the electrical wiring, a favorite ratty snack. How it would make such a loud scratching noise escapes me, too. Today I inspected the eaves and the attic vents; they appear still to be secure. But a roof rat, which is about the size of a Norway rat, can wriggle through an opening the size of a half-dollar (some say the size of a quarter, but I'll believe that when I see it...).

We also have raccoons in the neighborhood. They're larger than rats and can make serious pests of themselves. But again: raccoon or rat...what was it scratching? I think if a raccoon had been scratching at the security door (by dawn's early light, the side door proved to be closed and locked), it would have made a metallic sound. This didn't sound like metal. It was more like scratching on wood. Like, say, rafters...

On the other hand... We do have bipedal vermin around. A day or two ago, neighbor Maria came home to find two creeps parked out in front of our other neighbor Terri's house (do you know how many single women inhabit these houses? Gee!), obviously casing. Then yesterday evening I went to take Cassie and Ruby for a short walk; for the first time Ruby was dragging on the leash. Very, very tired, I decided this was a fight I did not care to engage, so I brought them back to the house and went out for a mile's brisk walk on my own.

Just pranced around the corner when I came face-to-face with some wandering inhabitants of the desperate slum to the west of us -- the park attracts them. It was a small family: a woman with about an eight-year-old boy, who had a Chihuahua on a lead. They were all right. But what came right after them was not so all right: a big bruiser of a thug in full gang regalia. He had a huge pit-bull mix with him -- also on a leash, but he, the dad, was too busy texting to notice that his big mean-looking dogo was taking a sincere interest in moi. And that it was clearly alarmed and suspicious by the fact that I was walking toward them.

I stopped. The dog looked relieved. They walked by on the other side of the road.

Very glad, indeed, was I that I happened not to have the pit-bull bait with me. That was extraordinarily lucky. My guess is, though, that the guy was texting notes on what he was seeing in the neighborhood -- one of the burglar ruses hereabouts is to get a dog from the pound (just up the road) and pretend to be "walking" the dog as a cover for casing the area and watching who's coming and going...and when.

{sigh} The house will need to be painted soon. Maybe I should accelerate that job, get the painter over here, and see to it that he secures all the potential ratty doorways while he's slapping a new coat of paint on the Funny Farm.

Thanks, everyone. I'll have to get the electrician over to climb up there and fix that light...and probably change it from its motion-sensitive to regular mode. There's a big tree out there, and the slightest breeze moves the tree limbs and...you guessed it! Turns the light on! That would be why it's burnt out, I expect.

Heh...Good thought about the car's panic button. That thing is amazingly loud.

This is a tough neighborhood, though...or actually, a middle-class neighborhood sandwiched between two dangerous, drug-ridden slums. As a practical matter, the residents have become pretty blasé about burglar alarms and car alarms...no one pays much attention. My preference for living in the central parts of the city is the specific reason I've had German shepherds for years...nothing like a GerShep to send Mr. Burglar down to the next house.

After the great Garage Invasion episode, I changed out all the aging windows for new, more secure ones and put screamers on them, and also installed sturdy security doors on the outside doors equipped with hardened Medeco locks. My office has a solid-core door with a hardened lock, too -- originally intended to protect my business hardware but, as it developed, also creating a handy-dandy safe room. And I'm armed to the teeth.

Unfortunately, my pistols are stashed in some very exotic spots, which makes it hard for me to get to them myself. And I tend not to practice...the range is one heckuva long drive from here.

If, God forfend, something is SO wrong with Ruby that I have to return her to the breeder or she passes away, then I suppose I will have to give up and apply to the German Shepherd Rescue for something that's grown, trained, and relatively unlikely to kill Cassie. If, as I sincerely hope, the little dog is OK, I suppose I should consider getting a shotgun, which does require less accuracy and can't be hidden in weird places.

I'm with the others, get those lights fixed and a panic buttom.  Does your car have a panic button on it?  If so, see if it will set off your car alarm from your bedroom.  If it does then keep it bedside...last thing they want is neighbors sticking their noses out the door.

My 2 bark like mad but once in the house it's ok tho Max will dog their foot steps wherever the go in the house.

Please be careful. Check all locks are as much burglar proof as possible, get security lights, a panic system set up, set up booby traps if you have to, just be as safe as possible. Make your home like FBI secured. Trust me, it's better to be overly secured than under secured.

Fix the security lights!!  You can also get a panic button that will set off a burglar alarm.  Light & noise are a burglar's worst enemies.  We don't want anything to happen to you, the pipsqueak or the Watch-Corgi (my boys are the Corgi Alert System-the problem is if anyone broke in, they would give kisses and ask for pats.)