My heart leapt straight into my throat this morning when I walked into the backyard and found the back gate hanging open.

It was coming onto noon. The dogs (and incidentally, I) had been up since dawn. I hadn't been out in the alley earlier, so that meant the gate must have been open all night. Ruby has a dog door, but on a gorgeous day like today, the doors to the kitchen, the family room, and the garage were all standing open. I'd had breakfast on the backyard patio, accompanied by dogs, and spent some time on the side deck working at the laptop computer.

No dogs were in sight when this little discovery came down. Cassie, I figured, would not go far. But Ruby would dearly love to explore the Lower Colorado Delta.

She has a chip, but she doesn't wear a collar while inside the house. The GerSheps always had collars on (it's good to have a handle on a German shepherd...), but these dogs are so close to the floor that tags drag on the tiles and through the dirt -- a nuisance.

If she got into the neighborhood, someone might try to return her. Maybe not. A coyote might catch her, too. But if she managed to get across the six-lane Conduit of Blight Boulevard without getting hit, she would be gone. She would meet one of two fates: someone would think she was cute and decide to keep her, or someone would use her to bait his pit bulls. And believe me: it's Pit Bull Central on the west side of Conduit of Blight.

{speaking of the which, there are the cops again as we scribble...hmmm...it's a little early for them -- they usually show up around 11 p.m. on a Sat'day night...ah, but they're moving on}

Just about to push the panic button, I ran in the house and hollered for Cassie and Ruby and...by golly, out they came a-trotting from their hideaway in the back bathroom!

Either they hadn't noticed (doesn't seem likely) or they elected not to take off for parts unknown. 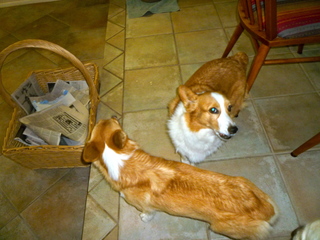 thank god, i can imagine the relief when you saw them!! what a horror story!!

so glad they are okay!!

Glad they stayed close.  I got a call once from the assisted living down the street that Redford had wandered in their front door.  It turns out he snuck out when the lawn guys came in to mow the grass.  When i got there, they had tied him to the front desk with a ribbon and he had a cup of water to drink.  He was sitting contentedly.  Thankfully, he didn't try to cross the 6 lane busy street in front of the assisted living.