Herky has been having problems with allergies and "eating" his feet. He is on a second round of meds so hopefully this will help. I've also had to resort to using the cone. He is sooo sad. I'm sure he will get used to it (?!?) but right now he came and sat on my foot and won't even look at me.

In the other pic I had to put my arm thru the back of the chair and stretch around to get a look at his face....

So anyway, he seems to have a hard time walking as the cone scrapes the ground. Is this because he isn't lifting his head and he will figure it out? Surely it can't be because of his short little legs :-) 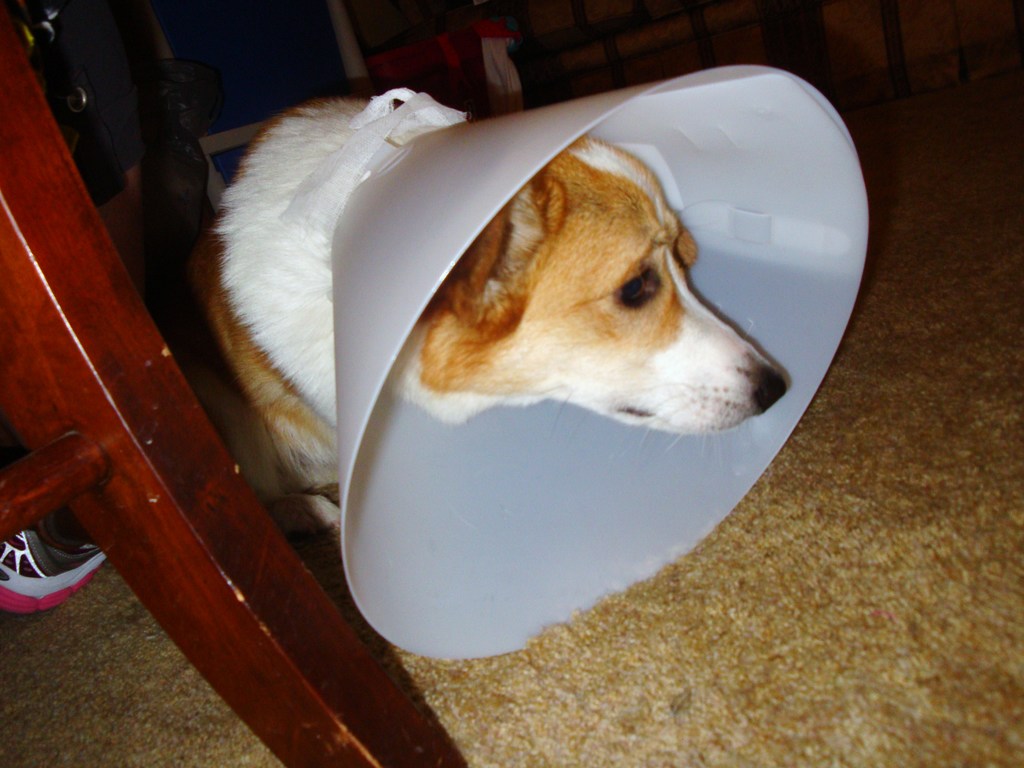 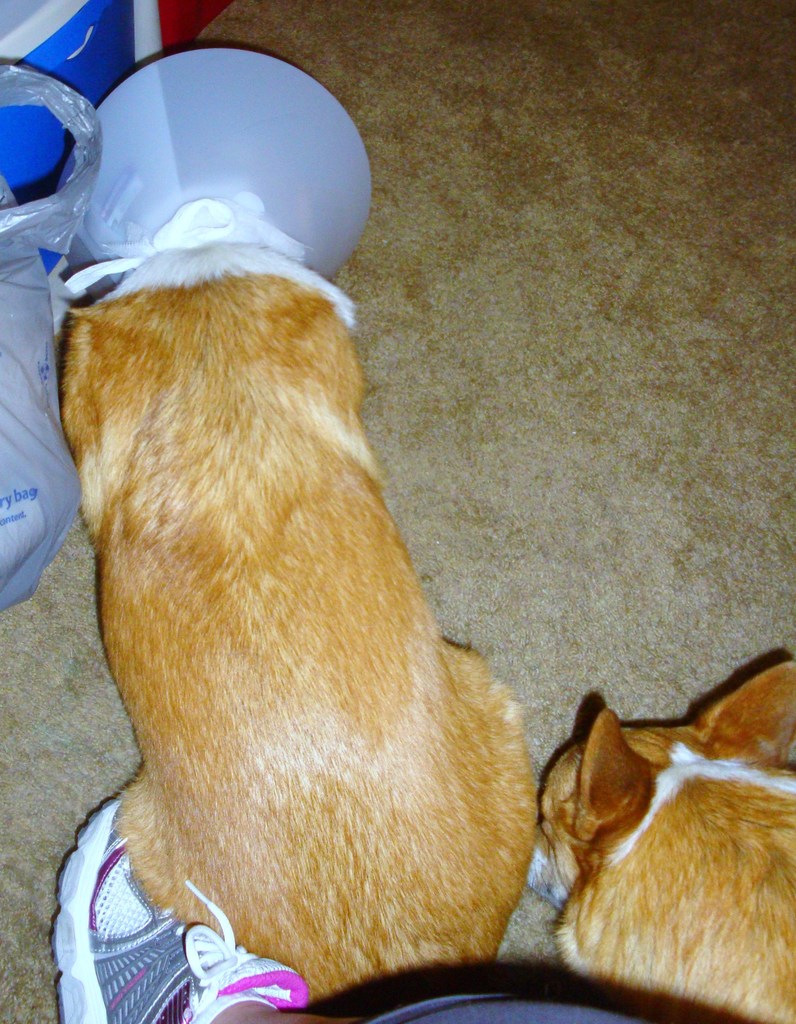 Poor Herky. The sad look on his face makes my heart ache for not only him, but you. I hope this new round of medicine works for him and he will be a happy camper soon. (Sorry, no advise on the cone of shame dragging on the ground.)

Mishka has allergies and eats his feet.  We use a Comfy Cone, which works for us and is way more comfortable than a regular cone.  Also if it hits the floor or a doorway as he's walking the cone doesn't jam into his neck.

Ziggy is going through the same exact thing.. He's going on day four in the cone, and will not move from where he is laying unless I remove it... Which isn't often. I try to keep it off as much as possible when we are in the room, but sometimes even when I am right next to him, pulling his face away from his paws, he goes right back to it and that results in cone time again, as I just can't sit there doing nothing but holding his face away-I lack the patience, and so does he... Starts to get snippy with me!

Pretty sure that when he jams the cone into my legs and computer that he's trying to make me as uncomfortable as he is.. It's working lol... He doesn't give up easy, and I'm being tenderized to death.

Comfy Cone sounds like something I would love to have though..

Have you asked your vet if you can use the soft cone? I think it's called comfy cone. It made all the difference to my Corgi. He could sleep in it and was much more comfortable. It comes in several sizes. 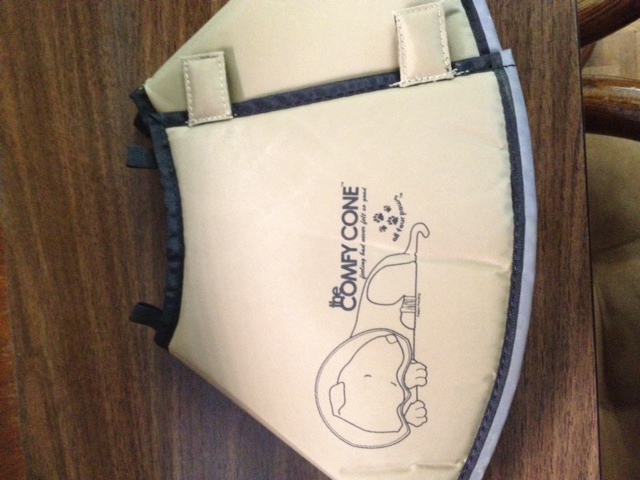 I THINK THIS IS A MUCH MORE COMFORTABLE COLLAR.

Oh Herky, we feel so sad for you!!  Have you tried the blow-up cones?  They work pretty well, and Seanna seemed to like that one way better...

Your Herky looks a bit like my Jack!  Poor guy.

Jack just had a week with the cone because of an eye injury.  We were told the soft cone would not work because he could still reach the eye; the soft cones are good for keeping them from stitches though.  I would worry with a soft one that he could still get his paw to his mouth to chew.

We did two things that helped.  One was my husband measured carefully and cut about an inch off the front of the cone.  Corgis have HUGE necks for their size and the vet tech even said it was too long for him, but the next size down would have been so tight she was afraid it would pop off.  So we cut it very carefully, made sure there were no rough edges, and he was much happier for it.  Not only could he get around better, but it was lighter.

The other thing we did, thanks to a tip from a friend, was to use a hole punch to put a hole in the top and then I threaded some line through it when we went on walks (I kept the line off the rest of the time).  I used the line to hold the cone up so he would not keep banging into the ground.  Of course you may be able to take your cone off on walks...

They really can't figure out how to get around.  Jack was very cuddly when it was on and that's not like him. He also kept bashing my legs, but it was because he was trying to snuggle his head against me.

Here he is with the string rigged up.  This is after we cut a bit off the front.  You can see that his ears can just poke out of it, whereas before we cut it they could not. 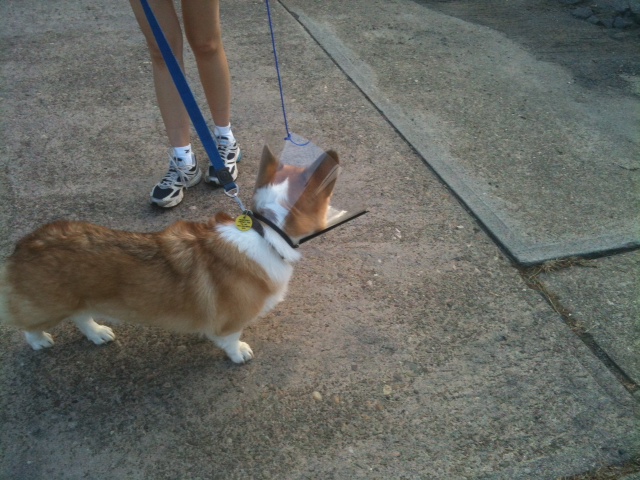 how inventive you are!  I think I will try cutting it a little bit. I hate watching him walk into a step. he's gotten a little more used to it and was walking around looking happier and bonk, right into the outside cement step. it didn't actually hurt him but it certainly startled him. AND since he's my baby, I feel awful for him. our other dogs are running around him sniffing which makes him look miserable also. all in all I am hoping for a hard freeze to get rid of some of the allergens in the air!

After you trim the edge you could try putting electrical tape around the edge to soften the blows on your legs. I used an inflatable for Snickers' knee surgery, even though it had a lot of bad reviews. I think they would work great for any body injury/stitches, but not for feet or legs. Snickers figured out how to get to her knee- fortunately, not until the day before the stitches came out.

The inflatable does make a nice pillow. 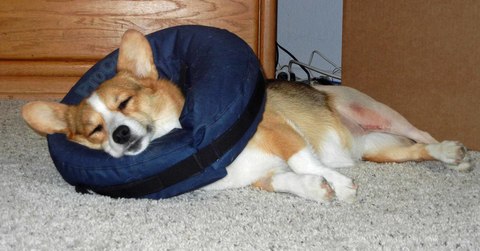 I couldn't stand seeing Snickers looking so pathetic, as Herky does. 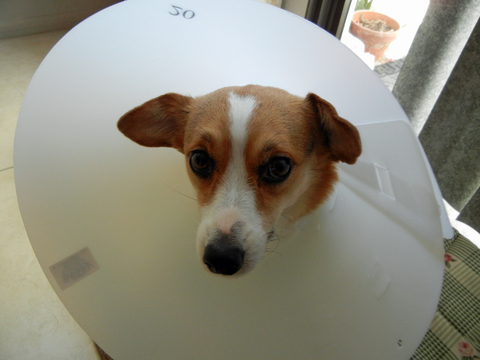 yep, there's the "why are you doing this to me, I am sooo sad" look.

I almost think the other dogs might think the soft or inflatable one was a toy. they have been following Herky around and kinda batting it with their paws as it is.

We have made it thru the first day with the cone on and what a difference in his feet. they look so much better already. He usually doesn't chew them at night so vet said we could try taking it off at night and see how it went. so far so good!

ricky-rafa had the comfy cone, recommended by his surgeon and it was great. another corgi used the inflatable collar w great success. the rigid cone is awful. i'd try every option acceptable by your vet before i would subject my dog to that rigid collar.