There were many things I did not know when I got my corgi puppy. Fortunately, no harm has come to her. But today, a beautiful 6 month old corgi named Pi, died.  His tumblr is here:   http://appleofmypi3213.tumblr.com/

His owners found him with plastic wrapped around his head. I do not know the details, I do not know the situation, but in the hopes of saving someone else from having to go through the heartache of losing their fur baby, let's talk about how to keep a puppy safe.

Step 1: Read "Food Bags Can Kill" found on the top of the front page.

Step 2: Do not give him too much freedom too soon. But, how do you know he is old enough to be left alone in the house uncrated?

What else should a puppy owner know?

Permalink Reply by Ciara & Macy on September 2, 2013 at 1:11am
I heard about Pi. I follow him on Instagram. His parents usually never leave him out of his crate but they did because the dad was gonna be home only 2 hours after the dog walker left. He was stuck inbetween the wall and the couch after getting into the plastic bag. He couldnt get out so had no way to escape the bag. It's so sad and makes me tear up whenever I think about that poor beautiful boy.

Oh my god! That is just too sad!

I saw his videos and pics a while back and I thought he was just adorable and he had an awesome name!

I can't imagine what his parent's must be going through. Obviously, they adored him to bits and pieces.

1. No access to cupboards with bags, cleaning supplies and poisons(I only use non toxic) DW soaps are really bad, garbage.

2. Toys...no rawhides or anything they could chew and get a chunk off of and choke on. I would only have antlers , rubber balls/toys that are heavy duty.

3. I would suggest an exercise fence or gated hallway for 1st with the crate open and inside.I have a huge lab crate and some of mine still prefer to be in there and then there's Wynn who loves his crate but never was crated as a pup.

4. CORDS...mine have wrecked a computer but luckily never got electrocuted. So all electrical TV's VCR's radios etc.

This post really got me thinking about one of the things I learned not to do again.

I remembered the one that scared me the most was when he was around 6-7 months. I crated him before I went to school and he had his collar on with his dog tag hanging from a metal ring.

It was like a day later and I found this 2 inch long piece of straight thin, metal wire near his crate.  I was like 'What the hell is this?', didn't think nothing of it, threw it away so Chucky wouldn't be able to eat it or whatnot.

Eventually, I realized that his dog tag was missing.  I looked everywhere and then pulled out his bed from his dog crate and there it was on the floor of the crate.  I looked for the metal ring but, couldn't find it anywhere.  And then......the dots started connecting.....the straight thin piece of wire that I found WAS the hoop for the dog tag.  Except it wasn't round anymore.  Apparently, either his dog tag or the hoop got caught on the door of the crate or something and he had struggled to the point where the metal hoop straightened out and released him from whatever it was trapped on.

I was very grateful that I had used a cheap, thin wire ring or the scenario would've been different.  He could've strangled himself to death in his panic to be free.  I learned then to never leave anything around his neck if he is going to be crated and then gradually I stopped putting his collar on at all if he was just going to be in the house.

In my old neighborhood, I also saw my neighbor's dog's collar get caught on a rusted nail.  She's an old girl and she likes to escape from the backyard every now and then.  Her owner's know that and tried to block the fence with as much stuff  as possible so she can't reach the fence but, she somehow managed to find a gap, squeezed through it, and then under the fence where a conveniently placed rusted nail happened to be.  Her collar got stuck in it. She struggled for a bit and I saw some fur flying off before she stopped struggling.  I don't know whether she was a smart girl and figured it was a no-win situation and decided to stop, or she just got tired and needed to rest a bit before renewing the struggle.

Setting aside my worries that she might bite me because I'm a stranger to her and she's trapped and might be feeling defensive, I mustered up the courage to go and free her.  She wouldn't have escaped without a person helping because the collar (it was a thin collar) had wrapped around the nail.

The collar can be a double edged sword.  Sure, it keeps the dog tags on and if the dog is lost and found it could be identified immediately but, it can also catch on things and strangle the dog to death.

Dogs or puppies...the situations they get themselves into just astounds me sometimes.  Sometimes it's just like, "How is that even possible?!"

I live in the country and feel like I must have my dogs tags on them. I do use breakaway collars although some of them are very hard to open too.

Beware the yard! Our neighbors lost two golden retriever puppies because of toxic plants and chemicals (either a pesticide or fertilizer). Many, many plants are toxic, such as azaleas, begonias, mums, and poinsettas. Some dogs, and puppies especially will eat anything; including rocks, sticks and other things that can cause intestinal blockages.

Keeping your dog in your yard can be very difficult ,because they will try to escape, which as Mai pointed out can be dangerous for them to try OR succeed.

Watch out for toxic foods as well! Onions, garlic, grapes, raisins, avocado, alcoholic beverages, things with caffeine, things sweetened with xylitol, chocolate- even white chocolate, there are many others that can be toxic in large quantities.

Be very careful with your medicines- acetaminophen and ibuprofen are deadly!

A fund has been set up at CorgiPals to help increase awareness of the dangers of food bags.  Corgi Pals Food Bag Awareness Fundraiser 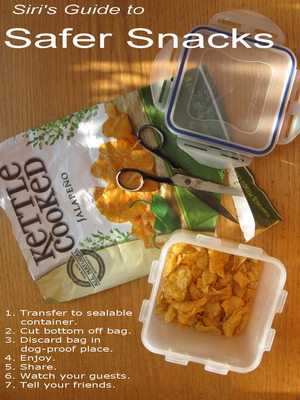 Mention this to every corgi person you meet.

Mai, I had a very similar situation with Jeff in his crate. I came home on my lunch break to check on him- normally he is wagging his tail and is right at the door ready for me to let him out to play. That day he did not move and didnt even lift his head to see me - as I looked closer I noticed his tags were stuck under the wire, preventing him from moving his head. I am so thankful that he continued to just lay there rather than struggle with the crate and tags. I am happy it was only for about 4 hours that he was like that too. Now I definitely take his collar off when he is in the crate.