We got our our first Corgi Eva a year ago as a puppy, and have really enjoyed socializing her and giving her plenty of chances to play with small doggie friends. This month we decided to add to the family permanently by adopting an 18-month old rescued Corgi named Elliott.

In his former home, Elliott suffered from neglect, abuse, and even a terrible pit bull attack that left him with a large scar and some serious hangups about other dogs. The good news is that he and Eva are getting along great (she just won't let him be a grump), and with training he's learning not to treat every new dog as a potential threat.

The trouble is when they play. Most of the time it's the kind of wrestling Eva does with all her small-medium playmates. Lots of "I eat your face!" business, low grade growling and barking, and chasing eachother around. But at least once a day it gradually escalates like Elliott is losing patience, and as the volume and intensity go up, it crosses the line into an actual scuffle (though not an actual fight, I'd say), and we have to stop them. Minutes later, they're pals again.

Does anyone else with multiple Corgis have any advice for dealing with this? We're definitely going to have a trainer in to work with us on this and his other issues, but Corgis seem to have a particular way of playing, and I wonder how much the breed comes into play with the escalation issue. 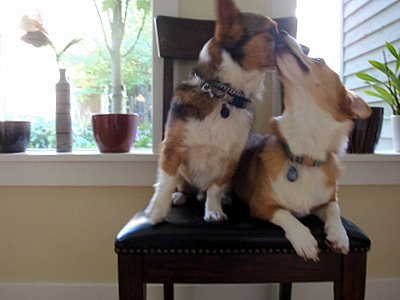 Eli on the left, Eva on the right, being buddies.

Permalink Reply by christy fry on August 5, 2009 at 4:25am
I don't think it's a corgi thing so much as a dog thing I've seen play turn to little scuffles back to play between my sis's retrievers & thier 2 & 3 it's happened at my house between Jordan(corgi) & Cody(lab) also. I'm watchfull of the play and will step in if I think it's getting a little rough. I think thats the most helpfull in keeping those kinda things to a minamum in my house.

Permalink Reply by Bev Levy on August 5, 2009 at 7:56am
I always stop play if it has gotten a little too rough. I figure I am the pack leader and can decide what is too much. The dogs will let each other know when it is too much but the one that is overexcited may miss the cues. You really don't want them to reach the point of disliking each other because it then becomes much more difficult to keep everyone safe. Corgis can play a little rougher I think just because they are such a confident little dog but that fits a lot of breeds. Try to stop them when Elliot starts to appear uncomfortable rather than wait for him to actually have to get upset. She will catch on eventually when the line is being crossed.

Permalink Reply by Sam on August 5, 2009 at 8:19am
From this picture it appears that Eli has a dominant posture. His body appears to be stiffened and his head is over her shoulder. Eva is probably happy go lucky girl who just is not reading Eli's signs that he is finished playing. I am thinking that Eli would do well with the "NILF" program. An internet search will bring you to various explanations of the program. Knowing he has had a jaded past is good but you must think about moving forward. Eli will function much better if he has good solid rules and expectations, something probably totally lacking in his former life. Good luck to you.

Permalink Reply by Cindi on August 5, 2009 at 10:10am
Yeppers! Especially Maddie and Moira. First, Moira is a bully. They have a love-hate relationship. And they play with each other--alot. And every so often, it does escalate. As my mom used to say, "it's all fun and games til somebody gets hurt." I've started to notice the signs...posturing, type of growling, etc...and stop it before it goes over the line. The more I stop them, the less likely they've become to go at each other.

Permalink Reply by Melinda (Penny's Mom) on August 5, 2009 at 12:28pm
When my daughters corgi Puck comes over they often get to the "too rough" stage...I've learned the signs and simply tell them to settle down and play nice and it is all ok. Penny is obviously in control because Puck always flips over on his back and submits to her (even though he is older), and when she is done playing she lets him know it!

Permalink Reply by Ross on August 5, 2009 at 4:08pm
I think this is common in lots of dogs.
Scout (the dingo) and Atlas (the corgi) play really really rough. If you didn't know us, or our dogs, you would probably think they were in an actual fight. It makes for great entertainment, especially when Scout catapults herself off the back of a chair and lands on Atlas. Sometimes one of the dogs may accidentally get too rough, and there will be a snap or a growl (which makes me break them up so they can "cool down", this "cool down" period is usually just a matter of a few seconds, and I let them go back at it again).

I don't think it's anything to worry about, you just need to supervise their play and act accordingly. You'll get better and handle on their signs of when it starts to get a bit more serious and be able to break it up.

I would suspect Elliot's aggression is triggered by insecurity, he is usually so wrapped up in play that he is able to forget his neglectful past and his attack, but those times when his baggage comes back are when his aggression manifests. I think if you give it time, and break up the play sessions when they are about to escalate, you will instill confidence Elliot and this will probably not even be an issue.

Permalink Reply by Val on August 14, 2009 at 1:02am
Thanks everyone for your advice and observations! I also had a trainer in, and just thought I'd share what she told me in case it's interesting to anyone else in my situation.

She mostly agreed that watching for and cutting off the escalation before it gets to a scuffle is a good plan. She said that it was probable that Eva is not getting Eli's stop signals, and in that case our role as owners should be to show Eli that we control the situation and are looking out for him by giving a "knock it off" command, reinforced as necessary. (Side note: with a smart breed like Corgis, it's especially important to develop a vocabulary that's consistent - my husband and I used different terms to break up playtime, and this wasn't helping the message) She recommended attaching a bit of cotton string to the collars so that if we ever needed to break up a scuffle already in progress, we'd not have to reach into it. And if they chew the cotton string (as they're apt to do with drag leashes), it's not the end of the world.

She also said that because it's evident in their play and elsewhere that Eli and Eva haven't worked out which is dominant at this point, they may need to have more chances to work that out, and gave us advice on giving that the opportunity to happen. She also reassured us that they will work it out in time, even if they're still unsure now, and the important thing is to observe and react, but not try to artificially set the dog hierarchy. As long as we're at the top, they need to sort their roles out themselves.

Anyhow, that's one trainer's advice to me, and of course your own situation may differ, but I just wanted to share back!