Should I be taping her ears??

Mia's ears both went up on exactly July 13th. She had her visit at the vet July 19th. Now I don't know if it has anything to do with the vet, with the deworming medication she is taking or if this is normal... but the following day her left ear went down and hasn't been up since? Is this normal? What should I do? Taping her ears looks cruel to me :(

Thank you in advance

Permalink Reply by Viola & Mia on July 22, 2010 at 11:39am
How crazy is this… I can’t say enough how much they really are twin sisters!!! The only thing I'm scared of is if I give it time and it won’t go up that it will be too late to do anything afterwards....

Permalink Reply by DIANE MOLNAR on July 22, 2010 at 12:26pm
MIA AND ZOE ARE SOOOOCUTE I WOUNLDNT WORRY ABOUT THE EAR GOING BACK UP ...

Permalink Reply by Kevin and Buddy! on July 22, 2010 at 12:49pm
We went through a similar situation with Buddy. In the end we woke up one day to see both ears up and they stayed that way! I wouldn't worry about taping, since it is usually due to teething that the ears have problems standing up properly. We found that when Buddy was chewing on something for a long time that one of his ears would go down.

Mia is still very young so I wouldn't worry! I think Buddy was about 3 1/2 months old when his ears stayed up for good. :)

Permalink Reply by Sam Tsang on July 22, 2010 at 1:50pm
Taping ears is not cruel, it is not painful (with painters tape) and only temporary, some only take days. Try look at it like splinting a finger, it promotes proper growth.

Permalink Reply by Monica, Orion, and Laika on July 22, 2010 at 1:57pm
That happened to Orion! They were both down, one went up, then it fell back down sideways and weird. So at 12 weeks since he had one ear totally down and one lopsided one I taped. Don't stress about it being cruel, Orion barely noticed.
Before: 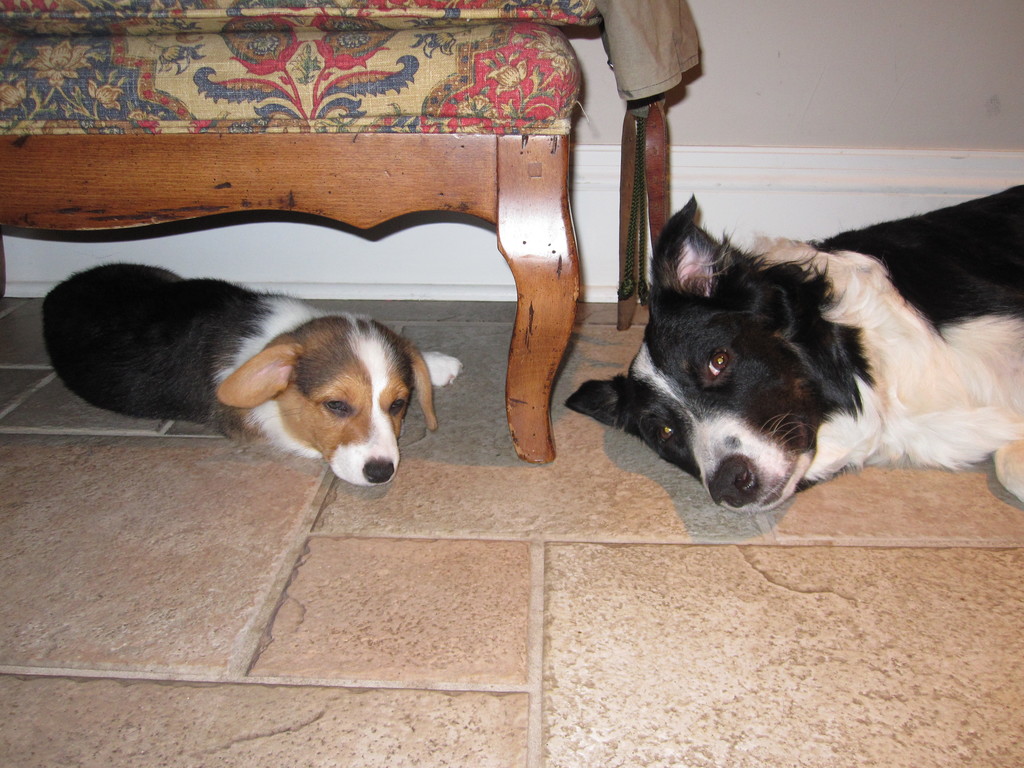 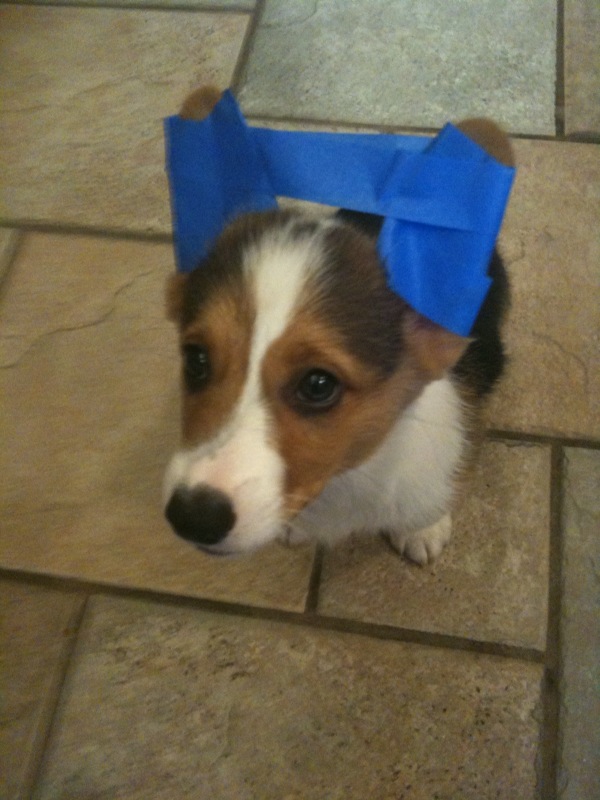 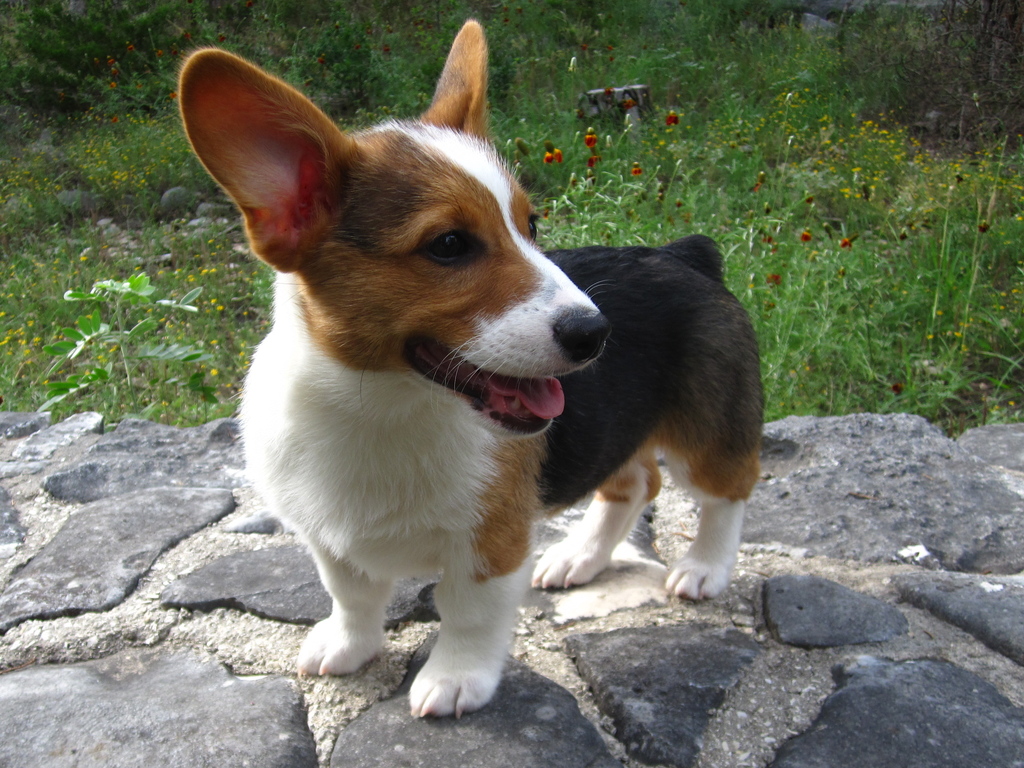 I taped for 3 days and after that they went up. About a week later they fell, I retaped, and after a day and a half they were up and have been ever since. Orion has very large very floppy ears. They fold down alllll the time, they are completely different than Laika's. Laika's are pretty thin and firm and have never flopped, they sometimes go back when she's excited but that's about it. Orion's are thick and easily bendable and he lays them down flat like 40% of the time he's awake. So his totally needed to be taped, especially since that one had never even hinted of coming up and the one that fell back down had been down for 2 weeks. Maybe wait a week since the fall and see if it pops back up, feed her calcium (yogurt or cottage cheese), that helps. I used blue painters tape and it came of very easily and didn't pull any hair out in the process so I don't think it bothered him at all, but he's a very laid-back guy. I'm not sure Laika would put up with ear taping if she needed it, haha
Good luck!

Permalink Reply by Viola & Mia on July 22, 2010 at 2:04pm
Awwwwwww they are all so cute! I guess I will wait another week... I have a feeling that Mia will react very much like Laika would have hehe I find that black head tris are always the most opinioned ones :)

Permalink Reply by justine moeller on July 22, 2010 at 6:13pm
Her ears will go up and down for possibly a little bit. Try giving her a little bit extra calcium (ask your vet about safe amounts) When she is teething that can cause her ears to flop around. We taped for a day and then we decided to just let nature take its course. The result? A floppy eared corgi...haha... I do not see anything wrong with taping at all though. I got one picture of Walter with his taped ears and then I felt so bad for him I wouldn't take anymore. Haha! Puppy ears are known for going up then coming down then going back up.... but if her ears dont come back up soonish and you really want her to have her ears up then you will have to tape.

Permalink Reply by Monica, Orion, and Laika on July 30, 2010 at 1:22pm
Yay!!! Don't be dissapointed if they flop again or start to droop. After taking the tape off Orion's ears began to droop a week later. I taped for a night and they've been up since then :)

Orion and laika would like to congratulate her on her fancy new corgi ears! :D