What's even better than a corgi shirt?? Supporting a small animal shelter!!

DOG FOUND!!! IN ELKINS, AR. - microchip that was administered in Washington state but never registered!!

I didn't find this dog, just passing the message along. I have emailed the poster that I planned on posting here. I hope we can find this guy's family!!! …

Hi guys!! It's Ein's mommy, Stacy!! I am begging the mycorgi community to please come to this site:

and vote for mr. adorable einstein'b'gein (pronounced like OshKosh B'Gosh or…

Hey guys. Ein is about 14 weeks old now, and it's like the older he gets the more his eyes water. I know a lot of things could contribute to this, but the poor kid!! It doesn't seem to bother him, but it is already leaving tear marks down from the inner corners. His nose isn't runny, just his eyes. His eyes aren't pink or anything. In fact, they are relatively perfect. He's got kinda long black eyelashes, maybe those are falling out into his eyes? I just…

So I'm pretty sure my puppydog is a BAMF. 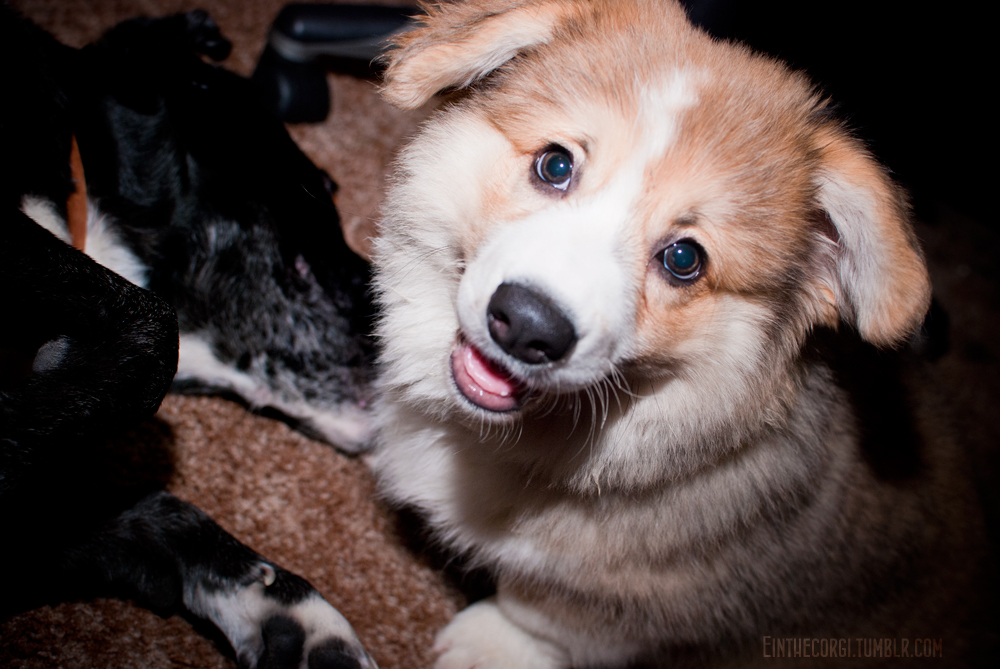 What do you guys think?

So, last night my friends on facebook convinced me to make a tumblr page for Ein.

Granted, most of them haven't seen this page... because, well... they really wouldn't get it I don't think. I mean... it's a social network site for corgis and their people. Not really for their people's friends haha! But many people I know have tumblr.

So anyway, I started it up last night, and then at some point one of the pictures was reblogged on…

I haven't told my family about our puppy, Ein.

How do you tell your family that you are spending a bunch of money on a puppy, and avoid the condescending responses? I know we have made the right choice, regardless of other's opinions and wishes. We have been planning for this for over a year, now. It probably would be easier if they knew that haha but we thought we'd be getting a puppy in March and our little Ein came sooner than expected. And I am going to…

How hard is it to train 2 puppies at once? For example, if you take home sister puppies?

When we get our puppy,  I am hoping to find someone who is a trustworthy breeder, and that the puppies have had great lives so far. We really want our first corgi to be very happy and healthy (as I'm sure many people hope for) and I am scared about finding a good breeder.

How do you know you can trust people? I wouldn't mind rescuing a puppy corgi from a - dare I say mill? But at the same time many puppies from these situations tend to be considered special needs dogs and…