My boyfriend and I will be bringing home our male PWC puppy next Saturday, and we cannot contain our excitement!  He'll be 11 weeks old, and we've decided to name him Casey after my boyfriend's beloved old family dog.  I feel like we've been waiting forever for him since we've been seriously talking about getting one for over a year now.  However, acquiring Casey came into fruition fairly quickly as we only found out last week that we were bringing him home.

We initially contacted Carrie Harris from Dalarno in late spring/early summer, however she didn't have any available at the time.  She recommended that we visit a local Corgi event, and we were fortunate to meet Carol Lord Openhym from Evensong and her puppies there.  She did have 1 or 2 available, but the timing wasn't right for us since my boyfriend and I began the process of buying our 1st home together.  At first I figured we wouldn't be ready for a puppy for while as we were going to be busy settling into our new home, but we had previously lived with a couple and their dog, and we quickly learned that we were missing that companionship.

Carol and I had been in touch since the event, and she has been instrumental in helping us!  We reached out to her at the end of September inquiring about her next litter, but she wasn't sure when that would be.  She then referred us to Gigi Fitzgerald of Foxtale who happened to have a 7 week old litter of 6 males!  After some emails, filling out an application and meeting Gigi at a local Corgi herding event, we're now bringing home a puppy!  His first week home with us will be a busy one too.  He's going to the vet, his first puppy class, meeting human and canine friends, and he'll also be traveling with us for a long weekend trip!

I've gained so much knowledge and insight about owning a Corgi from this site and was able to impress Gigi with what I've learned, so I'd really like to thank the MyCorgi community for playing a part in this as well!

One of these 3 adorable boys will be ours!  They are 9 weeks old in these pictures, and we're already in love! 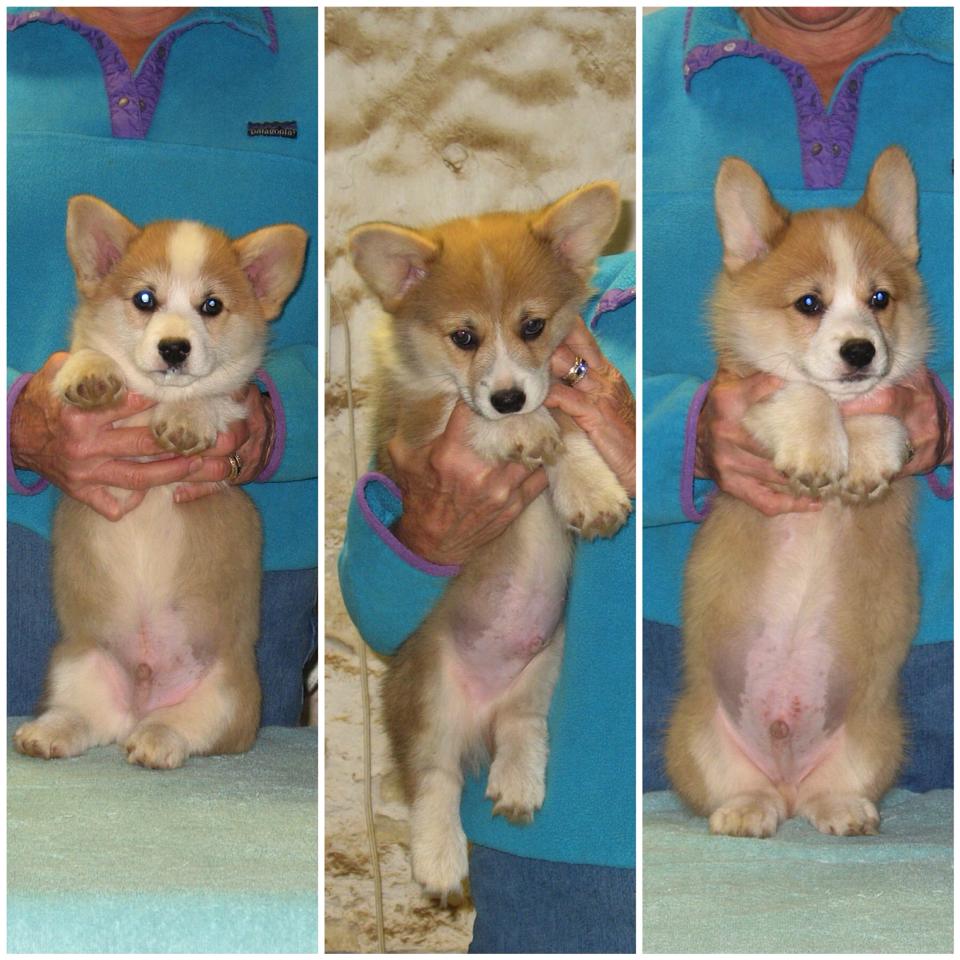 Comment by Chris Payerl on October 22, 2013 at 6:43pm
How can you choose just one?!!! They are all so cute. Sniff those little paws and tickle that little belly as much as you can --- sounds weird, I know, but that puppy paw smell and chubby pink belly won't last forever! Enjoy!!!
I don't know if anyone mentioned this already or not, but each of you may want to start sleeping in some old T-shirts (that you don't care about if they get puppy pee/poop on)for a couple of nights, so that you will have a supply that has your scent on them. Then you can put them in the crate with the pups when they have to be in there so that they have the comfort of your scent with them.

All darling..can't go wrong with any of them...but I pick door number two...love his expression!

Congratulations! Don't be fooled by the "timid" act if one of the pups seems calmer than the others! :) We reserved one of 2 male Cardigans out of a litter of 8. When we went to pick him up, he was MUCH more timid than his 3 sisters the breeder had him penned with. He found his own confidence immediately when he became a part of our family. Outgoing, fearless and friendly, as any corgi should be! And we too started puppy class his first week! Here's to great beginnings!

Oh what a cutie! Congratulations!

Comment by Bogart the Cardigan on October 19, 2013 at 9:13pm
Congratulations! Any one of those are cuter than anything!

My recommendation is to spend time with all 3 together and see which one "picks you"...they will do that and it may take a bit of time. My Wynn picked me...I wanted a female and he decided he would be the one...put his head on my foot and fell asleep:) Best choice he and I ever made.

I like the third one!  The middle looks mischievious...but nothing is cuter than a corgi puppy!!

Comment by Leslie & Rhys on October 19, 2013 at 10:27am
Congrats! We are also a few weeks from bringing our little boy home. Sometimes the timing of things just works out and it's meant to be (it was the same for us as well) :) Can't wait to see who you pick! They're all adorable.

Thank you, Anne!  I was just looking at photos of Abbey and she is just beautiful!  They grow up so quickly don't they?!  We're going to try to make sure to take lots of photos and videos of Casey. ;)  Happy early birthday to Abbey as well!