You have read Snoopy's story and soon there will be another blog post from him. He will be 13 on April 20, 2015. He's still going strong. Or slow. Not sure how to say it,  but he's never moved fast & I think that won't change any time soon. We adopted him when he was 6. He's a wonderful old man.

We got our Winston in 2006 as a puppy. He was our very first Corgi. I'd always wanted one & there was a need for a little boy to have a companion & Winston fit the bill. The breeder warned us that 'you can't have just one'. Sure-says I.

Snoopy came a year or so later and you can read his story in previous blogs. Then we lost our Rotn'Lab Waldo. My oldest son was heart broken. A few weeks later, a known puppy mill nearby advertised a retired Pembroke stud for sale. We went to look. Well, there were two of them, neither of which were 'making puppies' for some reason unknown to the breeder. She's since been closed down by the county Sheriff. Because the two were cheap, and we felt obligated to remove them from the situation, we bought them. $25 each. They are Duke & Spudz. A pair of unrelated tri-color males.

They came with issues. LOTS of issues. Their ages were estimated as about 5. Both were crypt-orchid (explains why they weren't making puppies) Neither dog is registered & both are terribly poor specimens of the breed. Both were hugely dog aggressive. Duke is tiny for a Pembroke. He was missing teeth. He's also the closet thing to mentally handicapped that I've ever seen in a dog. He'll fetch until he collapses from exhaustion even if no one else is playing.He's still dog aggressive at a whole 15 pounds. He has to be watched closely even now (5 years later) He walks on a leash, knows 'leave it' & 'sit'. Beyond that he's a simple companion dog. Spudz is my son's devoted slave. He's got the best personality of the two. He is also bow-legged & cross-eyed which can be terribly disconcerting when he stares at you. He's gotten over the dog aggression for the most part. He'll do anything my son asks...except get off the bed or not sleep on his pillow. 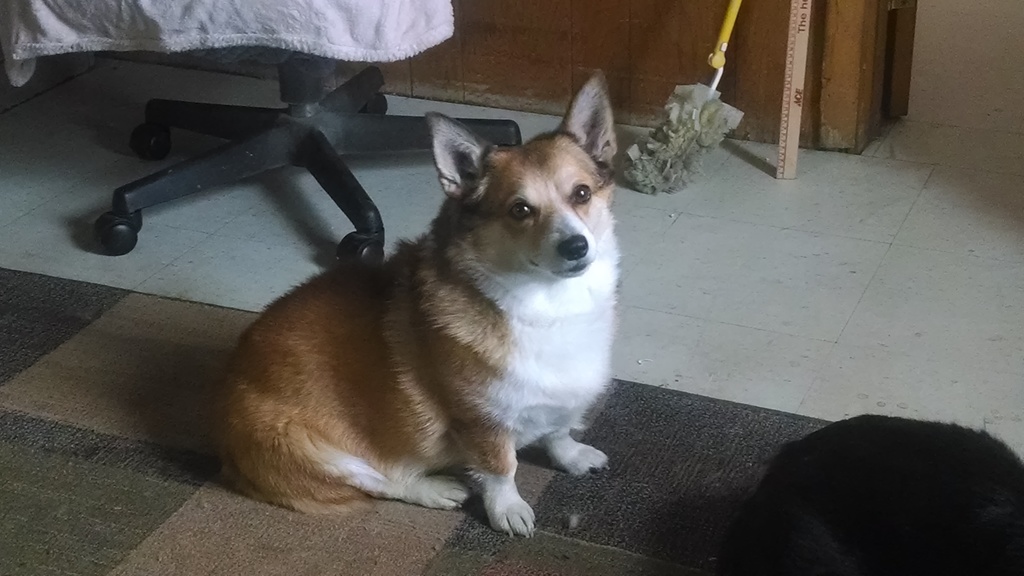 A year after that I received a phone call from a friend. 'Hey, you like Corgi's right?

So came Heidi to live with us. We are at least her 3rd owner. She was found alongside a local highway, taken to the shelter & adopted by an elderly woman after a month or so at the shelter. She lived with the elder woman for a month before the elder woman fell down the stairs & broke her neck--landing in a nursing home. Heidi lived in that home, with several other pets, being fed by neighbors for almost 6 months before she came here. Heidi is now about 8.  She's my constant companion, a not very bright one--and hugely stubborn. I know why the elder fell- Heidi goes through doors before people do. We've done all we know to break her of the habit but she still does it. She goes with me everywhere. She prefers living in the house--hates snow & would hold it till spring if we'd let her. She hates rain too. Hates windshield wipers & riding in cars. But she loves my guests at the motel & is the most joyful critter I've ever met.

Your breeder hit the nail on the head 'you can't have just one Corgi' (kind of like potato chips) I adopted Angelica the day she was born when the breeder sent me her baby picture. It was love at first sight. I've always adopted rescue dogs but when I started looking it became apparent that it would take quite awhile to do paperwork and get approved as a suitable Corgi slave. So I went the breeder route and couldn't be any happier with my choice. She was exceptional and her dogs extraordinary, living out on a 7 acre horse farm chasing cattle and playing the days away. Sure enough, Angelica has been here a little over 4 months and I have already contacted the breeder about another Corgi when Angelica is a year old.I hope I can stop at 2 Corgi's because I also have a 2 year old American Bulldog/German Shepherd mix who has taken over the role of doggie Mom/Sister/Best Friend with Angelica. There is no way to describe the feeling that Corgi's give you, its something people have to experience.

Hope you are feeling better after your loss. Like the old saying goes 'life goes on' and perhaps another Corgi will be looking for a home and will find his way to you...lucky dog.