Hey, I don't do too many entries, but this one deserved one on its own, since I know a lot of you have similar weight issues with your Corgis.

Riley at his high point was 42.2 lbs, ugh. I felt bad, because it was honestly not his fault (well, or really mine either.)

My vet and I were baffled for years, to the point where we were going to put him on drugs for the issue, as a last resort. We had to get the weight off this dog. We drew blood, expected there to be a thyroid issue - he naturally has a low temp - two degrees below normal is his normal - a low heartrate, low everything, and then tested him for all sorts of lovely things. (900 dollars later, vet said, "The only thing I can see with him is that he is truly zen, that's for sure.")

People would lecture me to walk the poor dog and feed him less and I'd point out we went three miles every other day (he kept up just fine) and he ate a 1/4 cup of restricted calorie dog food daily with green beans, and that was it. Sigh. My other dogs really didn't look like this, heck, my Shepherd was a lean, mean racing machine.

However... wow, popped him on the scale Sat at work and he's down to 29.5 lbs, as of Saturday! I honestly didn't realize how much he'd lost until it dawned on me the other day that people weren't coming in the shop insulting the poor dog. It had gotten to the point where my employees would basically tell people to shut the heck up nicely about it, and leave Riley alone.

Finally, I've found the diet that works for him. Thirteen pounds off, five to go! 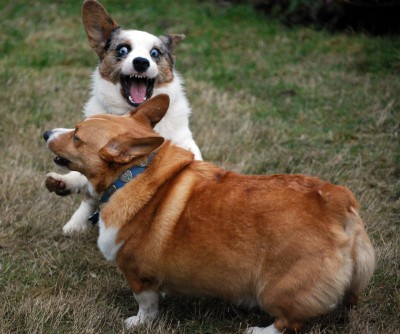 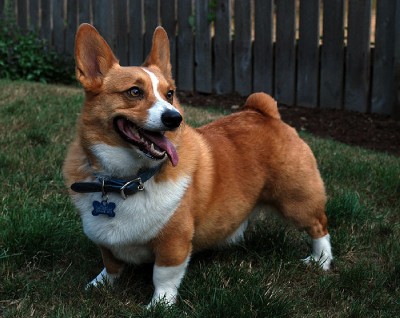 Haha, the only thing that now I laugh about is that funky little tail. It's the worst dock job ever, and now you can see it... ;) I'm okay with that. Now, the herd and I are off for our three mile walk.

Comment by Shepdog on August 11, 2009 at 12:01pm
Aw, thanks, everyone! I'm really happy with how things are going, and I'm happy to see him in much, much better condition. It's better for his back, his heart, his everything - not to mention he just feels better with the weight off, I think! Plus, he no longer looks like a tube in a fur coat. Luckily he's such a zen dude he didn't care about the insults, but I did, haha! Sort of bad press to have a pudgy dog as a pet-food store mascot.

Oh! Ah, as for diet, that was a whole other issue. It was recommended by the vet that we go to raw; we had tried all the kibble, including the grain free. Grain free really does help a lot of dogs lose the weight - BUT Riley is super-carbable, and the potato carbs used in many of the grain frees he was super senstive to and gained on that as well. Finding a truly low-carb dog food kibble on the market today is tough - in my opinion, there really isn't one. Canned food is far better if you need low carb.

The only problem with raw that he would get incredibly sick off of feeding raw diets, including the excellent, pre made ones. Any sort of raw meat causes him to get a bacterial bloom (bad news for him and me.) So we compromised and went to Sojo's, which is a dehydrated food mix, and we cook meats for him to go with it.

Now, mind you, he also gets a multivitamin every day, Missing Link, and every few days we alternate with no meat and add in Addiction kibble instead just so I can make sure that he's getting a good balance of minerals/vitamins. He does get raw bone to chew on - we just take away all the stuff on it and wash it first and that seems to be okay for him. The weight loss has NOT been quick so to speak - I believe that top photo was taken in April or March, but it is exactly what I wanted it to be, steady.

Mind you, we still walk (that's pretty important too) but as the weight comes off, he's able to trot farther with me. We also do about a half -an hour of fetch outside with the other dogs. He doesn't fetch much, but he does trot after the dog fetching and that keeps him moving.

He looks so handsome in the second picture. Good for you!

Now what exactly is that diet? *leans in*

Comment by Stephanie on August 10, 2009 at 6:10pm
LOVE the other dog's face in the top picture and WAY TO GO - he looks incredible!

Comment by Cindi on August 10, 2009 at 5:59pm
Hey, great job! Isn't it wonderful when you realize what you've been doing is working? Congrats!

Comment by Cindi & Twinkie on August 10, 2009 at 5:45pm
What impressive before and after pictures! Its like an info-mercial for the doggie bow-flex. Bow-wow-flex! Yikes, sorry about the awful pun. Great work though!